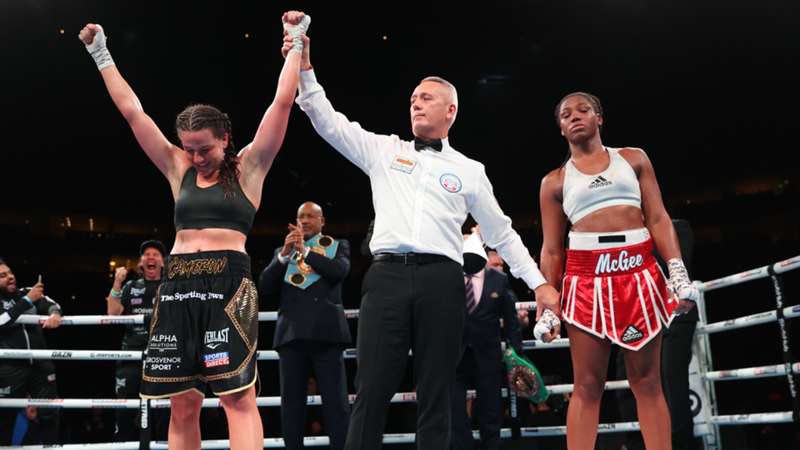 Chantelle Cameron not only retained her WBC super-lightweight title but claimed the IBF version held by her opponent Mary McGee and became the first The Ring Magazine women's super-lightweight champ in a great main event at London's O2 Arena on Saturday.

Initially set to be headlined by Dillian Whyte vs. Otto Wallin, the show was instead concluded by an all-out war between England's Cameron and American McGee. Though the two exchanged openly in scintillating moments throughout the fight, Cameron's movement and ability to land clean shots were on another level to her adversary.

The bout was also a semi-final in a 'Road To Undisputed' tournament that will eventually crown an undisputed champion in the division. Based on this evidence, Cameron is a solid shout to be wearing all the gold before long.

On the undercard, Alen Babic needed just five seconds to drop Eric Molina, who then moped his way to a second-round defeat at the hands of 'The Savage', who then called out Dave Allen for his next bout in what should be much more of a spirited challenge for the Croatian.

And popular prospect Johnny Fisher continued his winning ways to a huge ovation from the pro-'Romford Bull' crowd when he halted Spain's Alvaro Terrero.

Relive all of the action from the live blog below.

facebook twitter whatsapp
100-90, 99-91 and 99-92 all in favour of Cameron, who is now the WBC, IBF and The Ring Magazine super-lightweight champion!

facebook twitter whatsapp
Both women embrace after a war of a main event. Chantelle Cameron will surely be unifying and advancing here. But let's see what the judges had to say.

Heading into the final round

facebook twitter whatsapp
McGee would surely need a KO to win this, but it has been an absorbing fight to watch. Both fighters are tough as nails, but Cameron has been superior in movement and in landing clean pretty much all fight long.

facebook twitter whatsapp
This has been a tremendous scrap after five rounds. Cameron is in the driver's seat but McGee is finding some very flush shots on the counter and this ain't over yet.

It's time to unify

facebook twitter whatsapp
The Savage floored Moilina with his first shot of the fight, about five seconds in. He then scored additional knockdowns in the second round and the referee simply had to end it. This was a mismatch, and Babic may indeed have a limited ceiling in boxing. But my word does he entertain. Between his crazed media interviews and his relentless fighting approach, he is must-watch.

facebook twitter whatsapp
It's official - another big fight night on what is becoming a stacked conclusion to 2021 on DAZN. More details here

Ready for The Savage?

Alen Babic is next in another heavyweight bout, our eight-round chief support against well-traveled veteran Eric Molina.

facebook twitter whatsapp
The expected performance from the rookie brings his pro record to 4-0 in easy work for the Brit. Three knockdowns in the second round, with the third prompting the corner to throw in the towel. The official missed the towel, administered a count and then waved it off himself anyway. Ha.

facebook twitter whatsapp
Popular heavyweight Johnny Fisher is next up, with a six-round bout vs. Alvaro Terrero on tap.

facebook twitter whatsapp
After five strong if loose rounds from London's Richards, he finds a breakthrough in round six with the power shots. And it takes a few passages of offense to get the stoppage but with seconds left in the round, the official rightly rules that Matyja has had enough.

Jorge Castaneda gets the majority decision here, via scorecards of 95-95, 97-94, and 96-94. Khoumari faded in the latter stages of the bout but felt he had done enough to claim it on the cards.

Youssef Khoumari faces off with Jorge Castaneda over 10 rounds for the WBC International Silver super-featherweight title.

facebook twitter whatsapp
It's fight night at London's 02 Arena as the main card is about to get underway.