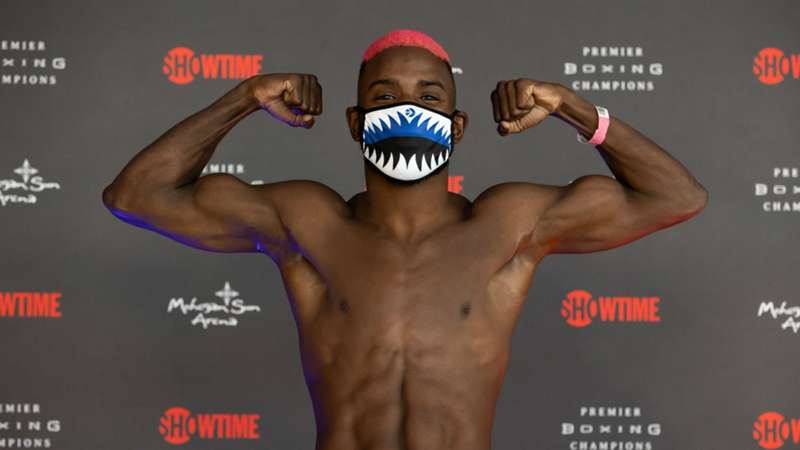 Chris Colbert put the 130-pound division on notice by dropping Jamie Arboleda four times and getting a late stoppage.

WBA interim super featherweight champion Chris Colbert put all of the 130-pound titleholders on notice with an impressive 11th-round TKO of Jaime Arboleda in the Showtime main event from the Mohegan Sun Arena in Uncasville, Conn., on Saturday.

It was assumed that Arboleda (16-2) would be the bigger puncher, but Colbert (15-0, five KOs) decided to turn that notion on its head by sitting down on his punches from the opening bell. He ended up putting down Arboleda three times before finally polishing him off in the 11th.

"I dominated the whole fight," said Colbert. "I probably gave him two rounds, but that was by choice. I just wanted to build his confidence because I knew I was going to stop him in the later rounds. I came to show the 130-pound division that I can punch. I'm here and I'm here to stay.

"I'm more than just a flashy boxer. I can stand in there and bang. I know there were close rounds in the fight, but I understood that as it was happening. It was part of the game plan. I knew what I was doing. I was wearing him down to knock him out late. I did what I said I'd do."

Arboleda wasn't there to lay down and managed to throw 300 more punches than Colbert. But Colbert showcased the flash and flair that have made him one to watch while also being determined to land with power.

Although he was in control, Colbert continued to seek the finish and put Arboleda down for the first time in the ninth round. Arboleda tried to fight back but Colbert was simply too much for him. A quick two-punch combination put the Panamanian down early in the 11th and a follow-up combination sent him down again midway through the round.

.@_Primetime718 delivers with an 11th round KO of Arboleda to stay unbeaten 😤 #ColbertArboleda pic.twitter.com/SkK0FBnUmo

Sensing the end was near, Colbert refused to take his foot off the gas and fired off a final barrage of power shots that put Arboleda down for good at the 1:37 mark.

"I had to come out here and put on a dominating performance. I talk a lot, so I had to make sure I backed it up," Colbert said.

And with that performance, the 130-pound division now knows that Colbert has bite to go with his bark.