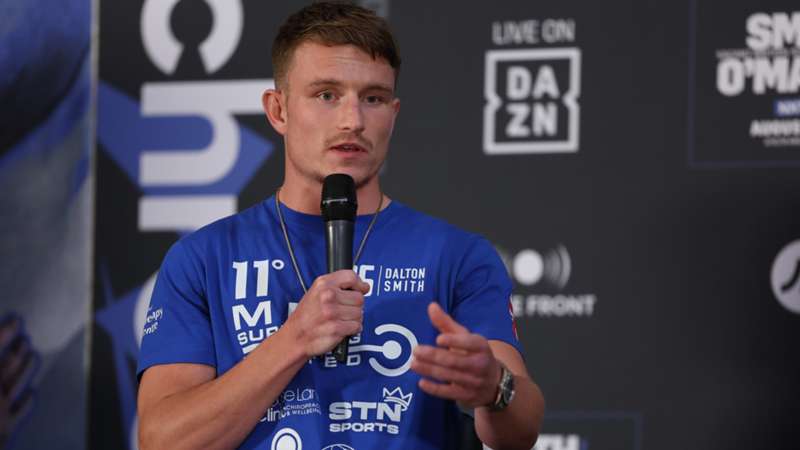 Dalton Smith is not feeling the pressure ahead of his fight with Sheffield rival Sam O'maison for the vacant British super lightweight title tomorrow night live on DAZN (except Australia and New Zealand).

Smith is one of the hottest prospects in British boxing and this fight will mark the first time he has headlined a card in his home city of Sheffield and the occasion is one he is relishing.

"There are no easy fights in this stage of your career in boxing. I’m overwhelmed with the support and how it’s sold. It’s going to be electric on Saturday night," Smith said during Thursday's pre-fight press conference.

"At the end of the day it’s just me and Sam in there. I’ve got that experience behind me and on Saturday night this is going to be like the homecoming for Dalton Smith. This is what is going to boost my career to the next level.

"You could say that there’s easier routes for me to take. I could go down the international route, but I want to do it the proper way. I look at the division I’m in and I’m in probably one of the toughest divisions in boxing right now. I want to do it right. I’m confident in my abilities and I know where I can go. The British is one belt I’m picking up along the way.

"You’ve seen how Sheffield Wednesday have got behind me. That’s not been forced, that’s because they’ve wanted to do it. They’ve showed the love and support. Not only the football club, the whole of Sheffield are getting behind me now.

"The ticket sales show that. 5,000 are going to be in there. The atmosphere is going to be hostile. This is what we dream of and I can’t wait to be stood on that podium soaking it all up. This is why we work so hard, for nights like this. There’s no pressure on me because I’ve wanted these nights since I was 5.”