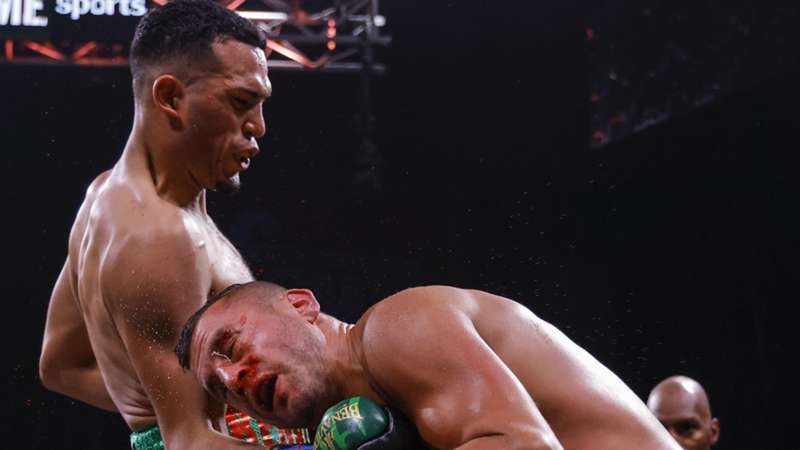 "El Bandera Roja" made sure his words were just as punishing as his punches Saturday night.

David Benavidez doesn't just pass the eye test. He gouged straight through it.

After witnessing Benavidez dispatch David Lemieux toward a third-round TKO (corner stoppage) on Saturday night, the boxing community gave it up to "El Bandera Roja," the new interim WBC super-middleweight champion of the world, in resounding fashion.

Errol Spence Jr. called Benavidez a "bad mf."  Brandun Lee dubbed him a "machine."  Shakur Stevenson labeled the Phoenix, Ariz. product a "killer."  And that's months removed from Mike Tyson bestowing the "Mexican Monster" on him — a moniker that the 25-year-old is embracing fully.

But as blistering as his switch-hitting and overall diversity of punches were en route to the TKO over Lemieux, Benavidez's callout of undisputed super-middleweight king Canelo Alvarez, former champ Caleb Plant, and WBC middleweight titleholder Jermall Charlo was just as scathing.

"I'm waiting on them to send me the contract," Benavidez snarled over to Showtime's Jim Gray. "Them b—es know what's up. I'm right here waiting for them."

He added: "I'm not scared of nobody. I'm the youngest guy, a three-time world champion (in the) 168-pound division. I'll put my belts against anybody, and I guarantee you, I'll knock everybody out."

In a boxing world where boasts and promises are tossed around often — some coming to fruition, others flatlining with little validity — Benavidez slings venom just as hard as leather. And the ability to talk it like you walk it is imperative for a world champion and superstar in the making.

You get the feeling listening to him that he means every word he says. He's not just talking to talk. He’s just as efficient with his words as he is with his punches. From the piercing power jab to blistering combinations and winding uppercuts that detonate on the chins of his opponents, Benavidez touts one of the more diverse portfolios of punches in boxing. And they come at an unrelenting, machine-like work rate.

The supreme confidence he exhibited while speaking on the likes of Canelo, Plant, and Charlo should be taken as seriously as his take on improvements to his own fight game.

“There’s always room for improvement, and every day I strive to be as good as I can be, and I try to be as best as I could be every day,” he told Gray.

When the reporter pressed Benavidez to elaborate, he added: “In everything. You can learn everything. Defense, offense, it only gets better from here. I’m going to keep working. Once I get guys as tough as David Lemieux, that pushes me to work even harder to better myself and my style.”

That’s a scary prospect for Canelo, Plant, or Charlo, considering Benavidez believes he can up his fight game and style to meet the challenge of stiffer competition.

The Lemieux fight wasn’t the bout that Benavidez wanted, but he seized the opportunity with not only his performance but his words shortly thereafter.

Before the bout, he told DAZN about the feeling that he’s one of boxing’s most avoided fighters. But, after his victory, which puts him in line to challenge Canelo, perhaps he’ll shed that tag.

Benavidez just might have put himself in a position where the avoided becomes the unavoidable.