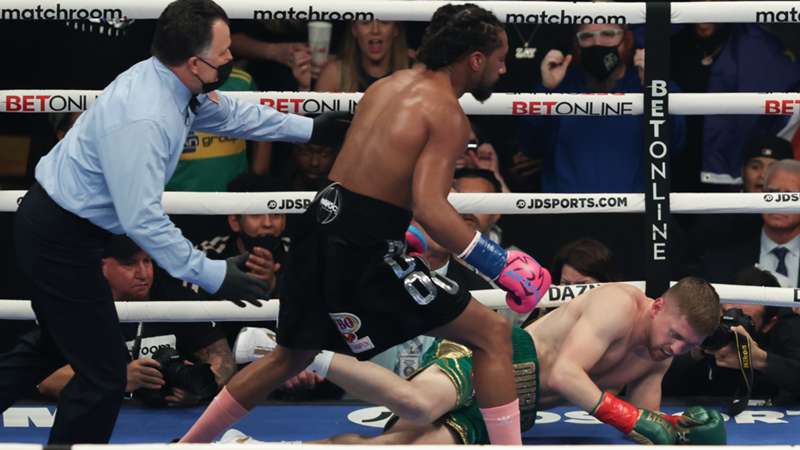 Melina Pizano/Matchroom Boxing
Andrade vs. Quigley on DAZN (except Uzbekistan)

Demetrius Andrade sent a message to the entire middleweight division.

Demetrius Andrade retained his WBO middleweight crown with an impressive second-round win against an overmatched Jason Quigley. The Rhode Island fighter had promised an impressive display beforehand, and he delivered on his pre-fight prediction as he ran through the Irishman with routine ease.

3 knockdowns in 2 rounds. Win by KO for Demetrius Andrade. What a performance. #AndradeQuigley | @autozone pic.twitter.com/S3gTUy2OGE

Andrade got off to a great start as a well-timed right hook in the opening session dropped a stunned Quigley. The Irishman showed superb resilience to survive the round, but the end was just around the corner as Andrade showed similar menace in the following stanza.

In round two, a brutal left hand dropped Quigley again, and the shot carried so much force that Andrade climbed the ropes to celebrate prematurely. Quigley beat the count, but the onslaught continued, and the referee jumped in to prevent the outclassed challenger from taking any more punishment.

Andrade’s win keeps him at the business end of the 160lbs division, and he’ll immediately turn his focus to December’s clash between Gennadiy Golovkin and Ryota Murata. As well as monitoring developments there, Andrade will also continue to push for a fight with Jermall Charlo. After tonight’s performance, he may find fights even harder to come by.

“I did what I said, and I felt good,” said Andrade afterwards. “Who’s next? What’s next? Jaime Munguia needs to be fighting me. I want to get in with the best. Line them up. The fans need to demand these fights and ask for the best against the best.”

Andrade stops Quigley in round two

facebook twitter whatsapp
A brilliant left hand from Andrade makes Quigley unravel and although he beats the original count, the fight is stopped moments later. This was an impressive win from Andrade and his sights will immediately turn to a fight with Jermall Charlo.

Andrade vs. Quigley: Round One

facebook twitter whatsapp
Andrade comes alive in the opening round. Quigley's welcome to world level is a harsh one as he's dropped by Andrade. A brilliant start for the Rhode Island man. Can he build on it? 10-8 Andrade.

The fight is over. it ends with a No Contest

facebook twitter whatsapp
Arroyo's cut is too severe to continue. The fight has been called off and because it was an accidental clash of heads that allegedly caused the cut, the fight is ruled a No Contest. A huge shame as the fight was shaping up to be a classic.

Arroyo down again in second

facebook twitter whatsapp
Arroyo is weathering a huge storm. As well as suffering another knockdown, the Puerto Rican is cut above the right eye. Can Arroyo survive any longer?

Martinez and Arroyo both hit the deck in opening round

facebook twitter whatsapp
What a first session! McWilliams Arroyo almost causes an upset as he drops and hurts Martinez in the fight's opening moments. However, the Mexican rallies brilliantly to return the favor at the end of the round. What an explosive start to this flyweight title clash.

facebook twitter whatsapp
Murodjon Akhmadaliev was tipped to have an early night against Jose Velasquez, but the Uzbek star was pushed hard throughout. The Chilean fighter was second best from the opening bell as Akhmadaliev went to work, but his stubbornness was impressive as he managed to hear the final bell. All three judges scored the fight 119-109 to Akhmadaliev.

A tense staredown takes place between Chantelle Cameron and Kali Reis as they get ready to face each other early next year.

Camara beats Reis to unify titles. Cameron is next

facebook twitter whatsapp
Kali Reiss and Jessica Camara delivered a brilliant encounter, but the extra accuracy from the former gave her the verdict on the scorecards. For the first five rounds, there wasn't much between the fighters. That all changed in round six when a solid round from Camera flipped the fight in her favor. With the fight appearing to be going the way of the Canadian, Reis rallied bravely and did enough in the closing stages to take the spoils via split decision. Chantelle Cameron is next for Reis for all the marbles at super-lightweight.