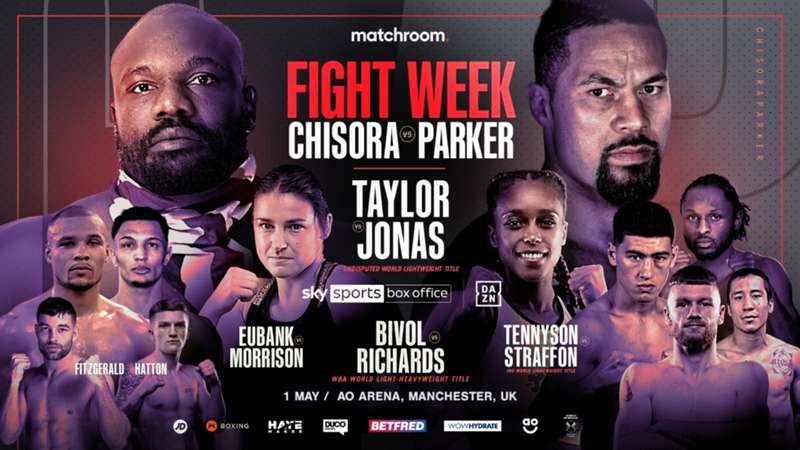 Matchroom Boxing
Check for Chisora-Parker on DAZN in your country

The winner of this high-stakes heavyweight dust-up could earn one more world title shot in the future. The loser may never get another chance.

Dereck Chisora and Joseph Parker almost met on October 26, 2019, at London's O2 Arena. However Parker fell ill after a spider bite and the bout was scrapped.

Now, they will finally face off in a battle that could well eliminate one of the two from world heavyweight championship contention for good.

Chisora lost his last outing on Halloween night against the unbeaten Oleksandr Usyk, but looked better than he had in years as he entered a motivated and energetic performance.

Parker, meanwhile, was victorious against compatriot Junior Fa live on DAZN at the end of February but his output in the Auckland clash left a lot to be desired, despite the surprisingly-wide scorecards after 12 rounds.

Victory on Saturday will likely put the fighter with his hand raised within one additional win of one more shot at a world champion. Whoever comes up short, however, may be all out of options.

Here's how you can watch Dereck Chisora vs. Joseph Parker.

When is Chisora vs. Parker? Date, start time

The main card is expected to commence from around 7pm local time, which is 2pm on the East coast of the United States. Main event ringwalks should be some time just after 10pm local time, though as ever with live boxing, the exact time of the headline attraction depends on how long the undercard runs.

What channel/stream is Chisora vs. Parker?

Fans in the UK, Ireland, New Zealand and Samoa can order the event via pay-per-view. The rest of the globe, however, can watch the entire card on DAZN, the sports streaming service. Visit DAZN.com now for more information including how to sign up and what the monthly cost is in your country.

Note: Fight fans in Argentina, Chile and Colombia can not register via the website and should instead download the DAZN app via Google Play or Apple's App Store. You can then subscribe from there.

Where is the Chisora vs. Parker fight?

The card takes place at the AO Arena in Manchester. Both men have fought there once before: Chisora dropped a thrilling split decision to Dillian Whyte there in 2016, while Parker retained his WBO title against Hughie Fury at the arena in 2017. The venue will be fully compliant with the current COVID-19 pandemic protocol.

Chisora vs. Parker card in full