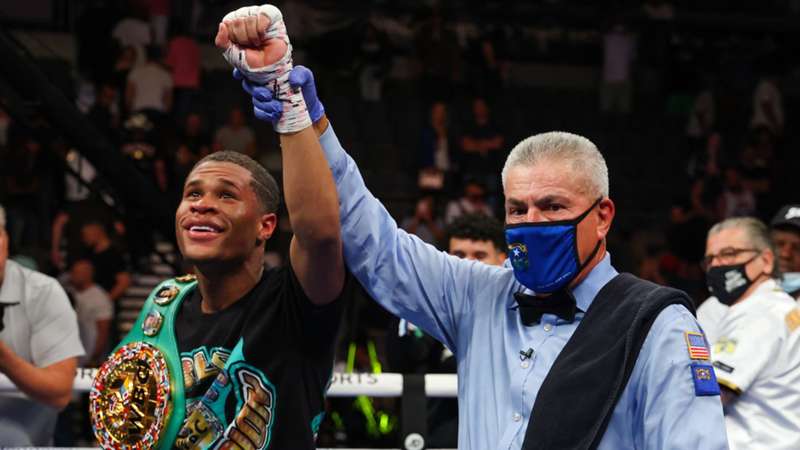 Devin Haney took care of business in his toughest test to date.

The thought among boxing pundits was that Devin Haney needed a signature win on his stellar resume.

Haney got what he needed on Saturday night at the Michelob ULTRA Arena at Mandalay Bay Resort and Casino in Las Vegas, Nev., by defeating Jorge Linares by unanimous decision (116-112, 116-112, 115-113) to retain the WBC lightweight title. DAZN News scored the fight 117-111 for Haney.

But the victory didn't come without adversity for the 22-year-old, who was wobbled by a Linares right hand at the end of the 10th round.

"He hit me with a good shot. I faced adversity, and I got the job done," Haney told DAZN's Chris Mannix during his post-fight interview.

Haney controlled the fight and appeared to be rolling toward a shutout as the quicker, more skilled boxer, when he was buzzed by a short right hand from Linares. The shot had Haney on jelly legs walking back to his corner.

Linares began the 11th round looking to capitalize on the momentum from the previous stanza. The former three-division world champion stunned Haney again, but this time with a left hook. Haney did battle back with an uppercut.

Haney finally got his bearings under him as the 12th round began. Instead of staying in the pocket and trading shots, Haney kept Linares at bay for the final three minutes to retain his WBC belt.

"This is boxing. You're going to get hit with big shots," Haney said about what happened in the 10th round. "But it's about continuing to box smart. I didn't get dropped. I didn't get hurt. At the end of the day, we saw other fighters in the lightweight division get dropped."

The question is what's next for Haney? Unified lightweight champion Teofimo Lopez said during the week that he'd like to face Haney next for all the gold if he gets past George Kambosos Jr. on June 19.

Here is what happened at Devin Haney vs. Jorge Linares.

facebook twitter whatsapp
What a seventh round from Mosley and Quigley. Each guy showed he can throw big punches, as Quigley landed three hard right hands but Mosley came back with a hard left hand at the end of the round. Give credit to both guys, absorbing those shots.

Devin Haney is in the arena

Halfway through the action

facebook twitter whatsapp
The fight has been going in spurts. Each guy will go for a few minutes, take their foot off the pedal and then go back at it. Mosley has taken control in the last two rounds with his power and by controlling the distance.

Fuzile def. Ward via TKO at 2:45 of the seventh round.

The fight got off to a slow start, but things picked up after Fuzile scored a knockdown in the fourth round. Fuzile started landing heavy shots and Ward didn't have an answer.

In the seventh round, Ward suffered a knee injury as he went in to throw a shot. Fuzile noticed something was with Ward and took advantage. He started connecting on right hands and Ward had no answer. A check right hook dropped Ward to the canvas. Ward picked himself up with help of the ropes. Realizing something was wrong, Ward's corner stopped the fight.

Ward was disappointed but the corner made the right call. No reason to risk further injury.

The win gives Fuzile an opportunity to fight for the IBF junior lightweight title in the near future.

After scoring the knockdown in the fourth round, Fuzile is getting into a rhythm. Ward is overloading on his shots and Fuzile is making him pay every time. In the sixth round, Fuzile nearly sent Ward back to the canvas with a razor-sharp left hand.

Jorge Linares in the building

Early in the fourth round, Ward comes barreling in and a check right hook by Fuzile sends him to the canvas. It looked to be more of a flash knockdown but one nonetheless. Ward appears to be just fine and showing no ill effects.

Coe came out trying to finish Tadd in the opening seconds. After settling down, Coe snapped the jab and pounded away to the body. Coe dropped Tadd twice in the opening round with left to liver and another left to the bread basket right at the end of the first round.

Coe started the second by utilizing a stiff left jab. He feinted and dropped down to blast one final body shot to send Tadd to the canvas and the fight was immediately stopped by referee Russell Mora.

A body shot ends it it round 2!

Couldn't ask for a better pro debut for Khalil Coe. Can definitely see the potential in the decorated amateur.

Should be a cakewalk for Coe.

facebook twitter whatsapp
Welcome to DAZN News' live coverage of Devin Haney vs. Jorge Linares for the WBC lightweight championship. An exciting night is ahead so lets have some fun.