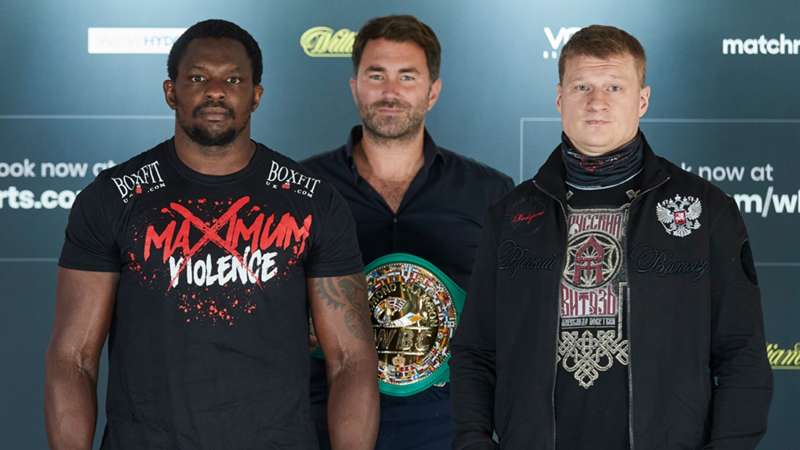 Matchroom Boxing may well have saved the best for last when the Fight Camp experiment reaches Week 4, with Whyte vs. Povetkin and Taylor vs. Persoon 2.

Eddie Hearn’s four-weekend experiment in his own back garden concludes with the fourth Fight Camp event on Saturday, Aug. 22.

Dillian Whyte and Alexander Povetkin clash for the right to be considered the WBC’s mandatory challenger to Tyson Fury (or Deontay Wilder, should the trilogy fight happen anytime soon and end in victory for the Bronze Bomber) in an eagerly anticipated heavyweight main event.

Both Whyte and Povetkin will know that nothing other than a victory will suffice if they are to attempt to muscle in on the top of a maximum-weight division that is really taking shape with the likes of Fury, Wilder and Anthony Joshua.

Meanwhile, Hearn has been quoted as saying that Taylor was “fuming” after enduring over a year of taunts from Persoon and numerous fight fans who regarded the decision to award the first fight — one Hearn called “one of the best he’s ever seen” — to the champ as the wrong one.

The bad blood between the women and the punching power of the heavyweights should guarantee an exciting conclusion to what has so far been a successful attempt by Matchroom to find a way to provide live boxing in the face of the COVID-19 pandemic.

Here’s a complete guide to the big event:

In the U.K., the Whyte vs. Povetkin fight is on Sky Sports Box Office.

The fight is available on DAZN in the U.S., along with the following markets: Canada, Brazil, Germany, Austria, Switzerland, Italy, Spain and Japan. In addition to those countries, select beta testers worldwide are able to watch the fight ahead of the upcoming global roll-out of the service.

Where is Whyte vs. Povetkin taking place?

The fourth and final Matchroom Fight Camp in August will, like the first three, be staged at Matchroom’s own HQ in Brentwood, Essex, England.