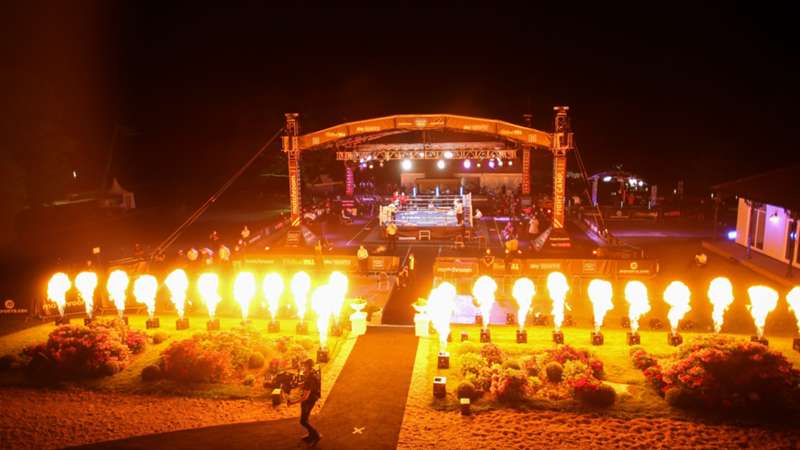 Matchroom promoter Eddie Hearn has suggested that his Fight Camp series could be extended past August, with more fights in his sights.

Eddie Hearn has raised the possibility that Fight Camp events at his company’s Brentwood Headquarters could become an annual fixture after the initial success of the first two weeks of his makeshift venue.

Matchroom used the time during lockdown to construct a ring in the gardens of their offices, in order to organise a series of events that took place with regular coronavirus testing, and athletes living in a hotel bubble for several days before fight night. The venue was established as a way to return to competitive boxing after Britain’s coronavirus restrictions.

Last Friday saw a clash between Terri Harper and Natasha Jonas, which Hearn described as, "one of the best fights I’ve seen," during an Instagram broadcast on Monday.

Boxer Nav Mansouri, due to fight Kieron Conway in Week 3, said, "Credit to you for keeping boxing alive," in discussion with Hearn.

Hearn opened the Q&A by announcing that the Fight Camp Series, "is the greatest idea we’ve ever had," and remarking that, "it’s mad coming back here everyday and seeing the ring walk."

Further into the exchanges on social media, Hearn revealed that he is, "toying with the idea of having some really quirky venues lined up, but I also might keep Fight Camp up if that was allowed for an extra two shows."

"Next year, we will 1 million percent have Fight Camp with a crowd."

Hearn continued, "The plan is October, it’s going to be really difficult to make fights without crowds. I’m hopeful in October we can bring fans back in some capacity." Although Hearn acknowledged it was down to "government legislation" before any concrete decisions could be made.

Looking ahead to this week’s events, Hearn cautioned that there were difficulties ahead with his outside venue, warning, "The weather looks a bit pony [crap]. Thunderstorms are going to be coming in, which is a [nightmare]."

Nevertheless, despite the difficulties on the horizon, when asked about the proudest moment of his career, he answered without hesitation: "Fight Camp, because of how difficult it was."