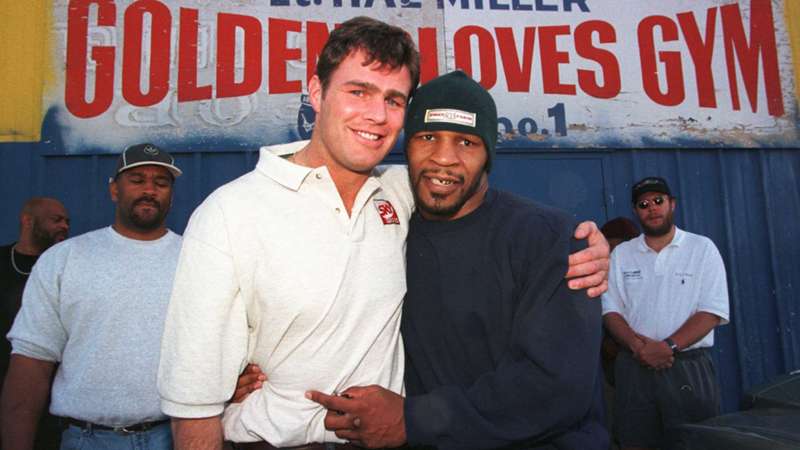 Tyson and Roy Jones Jr. have inspired more boxing legends in their fifties to return to the ring.

Days after Mike Tyson and Roy Jones Jr. had the world watching their unlikely return to the boxing ring for an eight-round legends' exhibition, British former world cruiserweight champion Glenn McCrory has claimed that he will be facing Evander Holyfield next spring.

Holyfield, who defeated Tyson twice back in the late nineties — including one of the most infamous disqualifications in sporting history when Tyson bit a chunk off his ear — has been getting back into shape and had responded positively to the idea of being the next ex-fighter to challenge "Iron Mike" after Jones.

Tyson vs. Jones was declared a draw by a team of three ex-boxers recruited as ceremonial judges by the WBC, but on Tuesday morning McCrory, who held the IBF cruiser title from 1989 to 1990 and was knocked out by Lennox Lewis in a bout for the British heavyweight belt, tweeted a fight poster on his official social media account.

The poster features the logo of Bare Knuckle Boxing, leading to fans replying with their concerns that the 56-year-old McCrory and the 58-year-old Holyfield would actually compete without boxing gloves.

However McCrory later spoke to Talksport and said he expects the bout to be a regular boxing exhibition, with BKB merely assisting with staging the fight, and that it could take place at London's O2 Arena in early 2021.

YouTuber Jake Paul, who fought on the Tyson-Jones undercard with a swift KO of basketballer Nate Robinson, and fellow internet personality Joe Weller have been reported by Talksport as being likely for undercard bouts — if the proposed showdown takes place.

“I spoke to Holyfield on the phone the other night and he said he’ll fight me,” McCrory said. “He’s been scared of me for 30 years, but now he’s finally going to fight me. He’s getting brave.

“We’re looking at April, I’m talking to Joe Brown and Jim Freeman from the BKB company and they want to put it on at the O2 in April.

“I was champion after Evander moved up to heavyweight, I took his vacant crown and I said to him the other night, ‘Why did you move up? Were you scared of me?’

“It’s 30 years in the making. I was the heir to his cruiserweight throne and he was the fight I always wanted, he was the best and he moved away.

“I’ve always been in good shape, I climbed the eighth-highest mountain in the world last year, so if I can do that with no training, I can certainly fight Evander Holyfield – it’s what I do!”

McCrory also said that if he beat Holyfield, he would want Tyson — who sparred with McCrory multiple times during the two's respective heydays — instead of Holyfield completing a Tyson trilogy in the most unique of ways.

“When I beat Evander, then Tyson’s next,” McCrory added. “I was there with Tyson in the days, I was there in his prime and I kicked his ass.

“Back then, he was getting all the money and the fame and I got nothing, so it’s payback!”

It is worth noting, however, that Tyson vs. Jones was not officially recognised as a competitive bout, which is why the WBC offered up superficial belts and judges instead.

If McCrory vs. Holyfield were to be any different and actually have an official winner declared, they would need to meet British Boxing Board of Control requirements. And a bout between the winner and Tyson would also have the same red tape to negotiate.