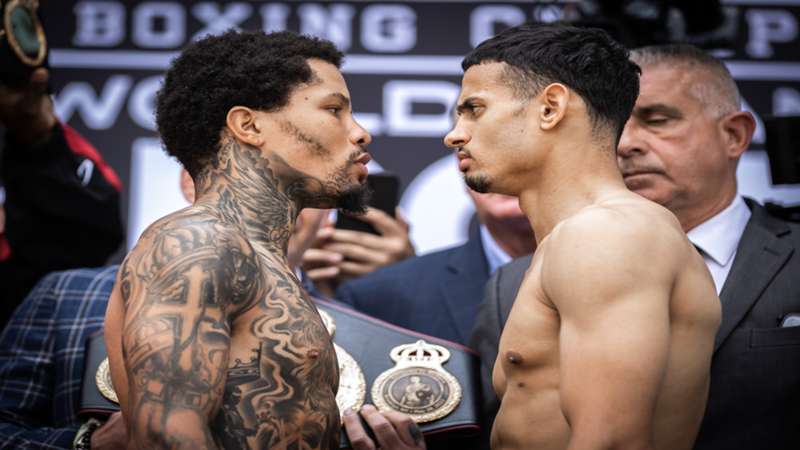 The feud between Gervonta Davis and Rolando Romero culminated on Saturday night at the Barclays Center. Every form of trash talk and offensive comments had come out of their respective mouths when talking about one another during the buildup.

Fireworks were expected with the knockout artists. Instead, however, we got a more tactical affair from Davis and Romero, but it felt like a matter of time before "Tank" became unleashed. One dynamite counter straight left hand sent Romero face-first into the ropes, and when he got up, the referee didn't like the reaction from Romero and waved it off at 2:39 of the sixth round. DAZN had Romero ahead 48-47 at the time of the stoppage.

Romero (14-1, 12 KOs) boasted to anyone who'd listen that he was going to KO Davis in the first round. Instead, Romero surprised Davis by coming out trying to establish the jab.

And that is what we saw from both guys as they were respectful of the other's power. Not many punches were thrown, but as the fight was going on, Davis (27-0, 25 KOs) was getting closer to connecting with the left hand. When the sixth round came around, Davis had Romero figured out.

The sixth was looking to be another close round. Romero leaned down and connected on a right to the body. But Romero left his head exposed, and that was all Davis needed as he released a left to finish things off.

Now, what is next for Davis? Fans are tired of Davis feasting on second-rate opposition. They want him to face the best the lightweight division has to offer. Fellow lightweight star Ryan Garcia was at the fight and checking Davis out. It's a fight many want to see.

"There's no safety on this glock," Davis said about facing Garcia next.

Here is what happened at Gervonta Davis vs. Rolly Romero.
0
NEW BLOG POSTS

facebook twitter whatsapp
Welcome to DAZN's live coverage of Gervonta Davis vs. Rolly Romero. An exciting night looks to be in store, so make sure you grab your refreshments, relax and enjoy our updates, results, and highlights.