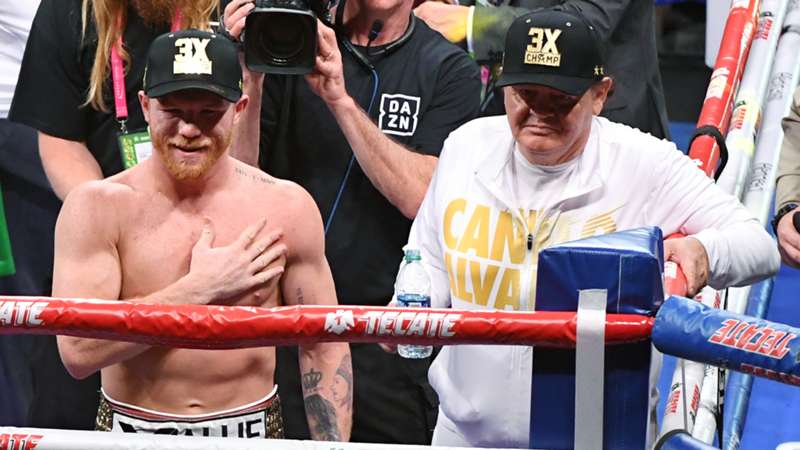 The DAZN Boxing Show discusses whether a fight between Saul 'Canelo' Alvarez and unified heavyweight champion Oleksandr Usyk is feasible.

Saul 'Canelo' Alvarez will attempt to become a five-weight world champion when he moves up to cruiserweight to face WBC title holder Ilunga Makabu next May.

However, on the latest instalment of JABS with Chris Mannix and Sergio Mora, the duo believe can go 'one better' when it comes to making history.

"If he [Saul 'Canelo' Alvarez] wants to make history, there's a more interesting path for him to do that. Sometime in the spring Usyk is going to face Anthony Joshua, if Usyk wins. He's free and clear after that to face whatever he wants," Mannix stated.

"Now, the belief is he would face Tyson fury in a heavyweight unification fight. But what's to stop Usyk from taking on say Canelo at something of a catchweight fight?

"Let's say 205 pounds 210 pounds something slightly above the heavyweight limit. A win over Usyk, Sergio, I think we agree would be a lot more significant for Canelo Alvarez, than a win at cruiserweight.

"Usyk is a former undisputed cruiserweight champion, highly skilled guy, it would be a tough test but I would much rather see Canelo go for a fight like that."

Mora on the other hand completely disagreed with his presenting partner and believes the Mexican needs to stay away from the unified heavyweight champion of the world.

"No Usyk, stick to Makabu if you're gonna do something great.

"Go to cruiserweight and beat this guy in his home turf in Congo, you can sell that, but stay away from Usyk."

JABS airs as part of The DAZN Boxing Show, with new episodes on DAZN every weekday as well as special live episodes from select big fights across the globe.