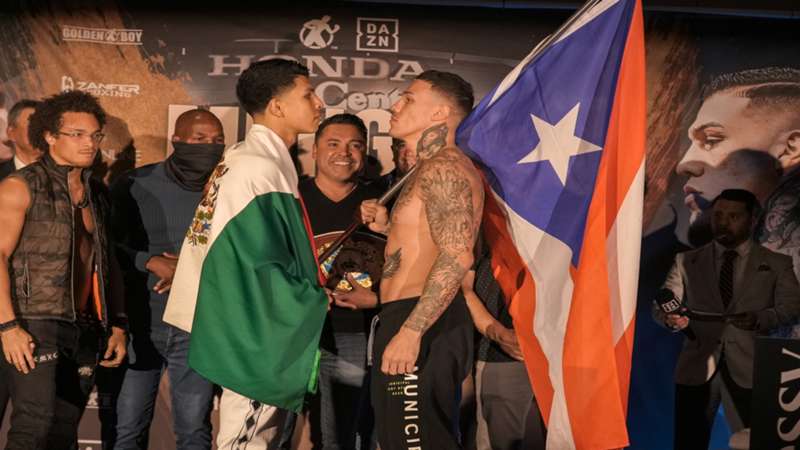 Did you expect anything less?

Jaime Munguia admitted to DAZN News earlier this week that Gabe Rosado would be his toughest test to date.

Munguia (38-0, 30 KOs) showed the new tools in his toolbox from the opening bell. He threw more combinations, jabs to the body, and his best defense to date.

The central theme for the majority of the fight was Munguia would control the round with his volume punching and power shots, but Rosado then turned things around at the end of the round with the chopping right hand and combinations of his round to make the round competitive but not enough to sway the judges.

For Munguia, he has a litany of options in the future. He's the No. 1-ranked contender of the WBC and WBO, so that means the possibility of either Jermall Charlo or Demetrius Andrade. Charlo is without an upcoming foe, and Andrade defends his title against Jason Quigley on Nov. 19 on DAZN.

Here is what happened at Jaime Munguia vs. Gabe Rosado.

facebook twitter whatsapp
Instead of coasting and riding the bicycle, Munguia fires a left hook to begin the round. Munguia looking for the knockout with another powerful combination. Double left jab and an overhand right from Munguia. (10-9 Munguia, 120-108 Munguia)

facebook twitter whatsapp
Rosado immediately lands a stiff left jab. Rosado lands a short right hand and Munguia eats and fires a right of his own. A right cross from Rosado sends Munguia back. Rosado pressuring Munguia, who then unleashes a combo of his own. A left hook stings Rosado. A right hurts Rosado. Munguia unloads but Rosado holds. A right and then a left uppercut a left hook from Munguia. A hard right hand from Rosado at the bell. Another stellar round from both guys. (10-9 Munguia 100-90 Munguia)

facebook twitter whatsapp
Double right and a left hook from Munguia. An overhand right starts a flurry by Munguia. Seven-punch combo from Munguia and Rosado stands his ground and takes the punishment. A chopping right hand gets Munguia's attention. Rosado lands a flurry of his own all the way to the bell. Munguia wins the bulk of the round and Rosado finds a way to come back at the and. Has to have more complete rounds. (10-9 Munguia, 90-81 Munguia)

facebook twitter whatsapp
Munguia slow to get up from his stool. Munguia with a nonstop flurry of punches. He's throwing from different angles and landing at will. A left hook stuns Rosado. An exchange of left hooks.

Another combination, punctuated with a left to the body. Two lefts by Munguia. Rosado hurts Munguia with an overhand right with 30 seconds to go. Even though he's down a mile, Rosado isn't going away. (10-9 Munguia, 80-72 Munguia)

facebook twitter whatsapp
Another combination from Munguia. A four-punch combo from Munguia. Munguia is landing combos at will. Rosado is starting to slow down. But then he comes with a right hand. (10-9 Munguia, 70-63 Munguia)

facebook twitter whatsapp
Five-punch combo and then a three-punch combo from Munguia. An exchange of uppercuts. Rosado comes back with an overhand right, his best punch of the fight.

facebook twitter whatsapp
Munguia breathing heavy coming out for the fifth. Double jab to start the round for Munguia. Combination from Munguia. Hard left jab for Rosado. Right hand to the chin by Rosado. Digging left to the body from Munguia. A combo from Rosado. Left hook to the side of Rosado's head. (Munguia 10-9, Munguia 50-45)

facebook twitter whatsapp
Uppercut down the middle for Munguia. Munguia misses a lunging right. A left to the body and a right upstairs from ROsado. A one-two by Rosado. Much better round for Rosado. A left hook lands for Munguia. Rosado narrowly misses a counter right. A short right stuns Rosado and sends him into the ropes. A hard left jab from Munguia. A left and a right uppercut down the middle connects from Munguia.

facebook twitter whatsapp
Munguia comes right out a double left hook. A right hand lands behind Rosado's left eye. A clash of heads that Munguia looks to have suffered the rough end of the accidental move.

Rosado looking for power shots and missing. Can't go shot for shot with Munguia. A hard jab from Rosado as Munguia comes in. A combination by Munguia and Rosado sticks with the jab. Munguia making sure Rosado doesn't set the pace. (10-9 Munguia, 20-18 Munguia)

Munguia pumping the jab early. Triple hooks to the body from Munguia. Loud "Munguia" cheers. A left hook grazes the head of Rosado. A hard right sends Rosado to the ropes. Rosado sticking to the plan. Pumping a solid left jab but not enough to win the round. Munguia looks sharp early. (10-9 Munguia)

Can Rosado continue to ride the momentum or does Munguia notch his biggest win to date?

Why this fight wasn't stopped two rounds earlier is beyond me. Rocha overwhelmed Barraza from the jump.

He broke down Barraza every which way. Upstairs, downstairs, it didn't matter. He let his hands go and connected on 233 punches compared to 98 for Barraza. Finally, early in the ninth round, the referee had seen enough of Rocha pummeling Barreza and waved it off.

Santa Ana's own Alexis Rocha gets it done in Anaheim 🙌#MunguíaRosado pic.twitter.com/bQGZWJF1xl

Rocha is no one to mess with. He's slowly and surely becoming a rising prospect in the welterweight division.

facebook twitter whatsapp
All Rocha. He's landing upstairs, downstairs and is applying all the pressure. Barraza needs to figure something out and in a hurry. It seems he's looking for a one-punch KO. Will he get it?

facebook twitter whatsapp
It's time for the co-main event of Munguia vs. Rosado as Alexis Rocha (17-1, 11 KOs) takes on Jeovanis Barraza (23-1, 15 KOs) in welterweight action.

I had Ballard winning but not by what the judges had it scored. The fight was much closer than the scores indicated. Valenzuela had things in control in the opening rounds. Ballard came on in the later rounds. He found a home with the check left hook and made it a point of emphasis in going to the body with it. Those shots took their toll on Valenzuela and wore him down all the way to the final bell.

Not the best showing for Ballard. He took too long to get going because of his 23-month layoff. At the end of the day, a win is a win and you take it any way you can.

facebook twitter whatsapp
Heading into the eighth round, Ballard has roared back in the last three rounds. He's finding a home with the check-left hook which is wearing down Valenzuela in the process.

facebook twitter whatsapp
The former WBO junior middleweight champion is at the Honda Center. Apparently, he entered the arena an hour later than he was supposed too.