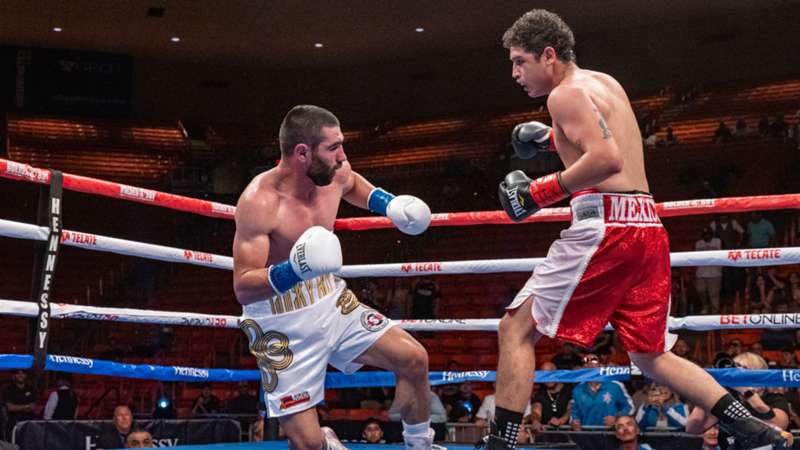 Mexico's Munguia returns to the ring with an emphatic victory.

Jaime Munguia strengthened his middleweight credentials with a routine win over Kamil Szeremeta that was screened live on DAZN . The Mexican, long frustrated due to several pull-outs in the buildup to this fight, was desperate to put on a show and he did just that with a ruthless stoppage with the action being halted at the end of round six.

Munguia, now seen as a serious contender at 160 pounds, began the fight brightly as he peppered the Pole with a fast jab searching for further openings. The first round was something of a feeling out exercise for both men but after the opener, it was the Mexican who took over.

Munguia went through his whole repertoire as he began to dominate and that saw Szeremeta being attacked from all angles as he swallowed a number of well-timed uppercuts and vicious body hooks. Munguia was enjoying himself but despite being on top, he couldn’t find the right shot to cease the contest.

Szeremeta tried desperately to stay in the fight but as each round progressed, he was on the receiving end of brutal punishment. The referee examined the action closely in round six and after the bell sounded to close the session, the third man stopped the fight as Szeremeta looked exhausted on his stool.

Munguia, with Erik Morales in his corner for the third time, is improving with every fight and must be seen as a legitimate threat to the titleholders at middleweight. Options are plentiful for Munguia but he made it clear in his post-fight interview that a bout with Gabe Rosado, victorious over Bektemir Melikuziev on the undercard, is appealing to him. His next move should be made clear shortly.

Munguia vs. Szeremeta: Round Six: The fight is stopped at the end of the round. Munguia wins.

facebook twitter whatsapp
Bravery beyond belief from Szeremeta. He's being hit with everything from Munguia and with the referee taking a close look throughout the round, he finally calls it off after inspecting the Pole on his stool.

Munguia vs. Szeremeta: Round Five

facebook twitter whatsapp
This is becoming unpleasant. Munguia is well on top. A rare moment of success from Szeremeta saw him land a decent left hook but it was still Munguia who dominated the round. 10-9 Munguia.

Munguia vs. Szeremeta: Round Four

facebook twitter whatsapp
Szeremeta face is marking up as Munguia enjoys his best round of the fight. The Mexican is attempting wide hooks to get around Szeremeta's high guard and it's working. Erik Morales, in Munguia's corner, is telling his man that the Pole can't take much more. He's probably right. 10-9 Munguia.

Munguia vs Szeremeta: Round Three

facebook twitter whatsapp
Szeremeta already looks like he's in survival mode. Munguia is bossing the action but he's in with a very defensive opponent. Munguia may need to be a little nastier if he wants the stoppage. 10-9 Munguia.

Munguia vs Szeremeta: Round Two

facebook twitter whatsapp
Munguia has found his range and that's allowing him to find the target. Szeremeta is throwing the odd jab to offset his opponent but the Mexican is getting through when he lets his hands go. 10-9 Munguia.

Munguia vs. Szeremeta: Round One

facebook twitter whatsapp
Quick and aggresive start from Munguia. Boxing behind a busy jab but he's throwing the uppercut, too. 10-9 Munguia.

facebook twitter whatsapp
Rosado has arguably closed the book on both the upset and knockout of 2021 categories with a stunning stoppage over Melikuziev. The touted Uzbek dropped Rosado in the opener and looked well on course to maintain his hot streak, but the Philly veteran had other ideas. As Melikuziev threw a left hook, Rosado landed a right hand first and the fight was immediately called off in the third session. Rosado's remarkable career has another crazy chapter.

facebook twitter whatsapp
A brilliant fight that was close throughout is won by Esparza. After being dropped in the opening round by Zamora, Esparza rallied superbly and maintained her agression for the remainder of the fight. The Mexican fought hard to keep her belt but the judges sided with Esparza, who is now the WBC female flyweight champion. A rematch would be most welcome.

facebook twitter whatsapp
An entertaining affair sees Cobbs stop Solomon in the closing stages of round five. Cobbs was finding the target with more frequency as the fight wore on and a brilliant left hand was enough to force the referee to save a floored Solomon. Cobbs wasted no time in calling out Jessie Vargas in his post fight interview.

Blair Cobbs is up shortly

facebook twitter whatsapp
Can one of boxing's most entertaining characters claim another win? Blair Cobbs steps up in class as he takes on Brad Solomon.