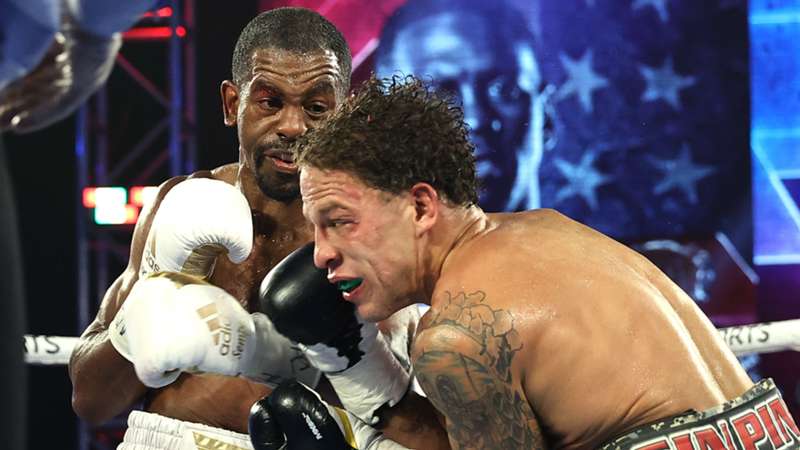 Herring retains the championship in an odd, ugly affair.

Jamel Herring hung onto his WBO junior lightweight championship Saturday night, but not in the way he envisioned to at all.

From the opening bell, Oquendo made it clear that he was going to charge head-first to make up for his height and reach deficit. However, the champion Herring adjusted well by stepping back and dropping the rugged challenger with a picture-perfect left uppercut in the third round. Instead of continuing to assert his boxing superiority, Herring inexplicably showed a willingness to fight inside with Oquendo following the knockdown.

The challenger lowered his head and opened up a gash on the champ's right eye with what was ruled an intentional head clash in the fifth round. Oquendo had a point deducted and Herring had to fight with blood gushing into his right eye to the point where he couldn't see following the eighth.

"I can't see," he repeatedly told his corner, prompting a ringside doctor to take a closer look.

Weeks then stepped in and ended the bout. Since Herring's vision issue was triggered by Oquendo's intentional headbutt in that fifth round, the fight was ruled a DQ, allowing the 34-year-old Herring to retain his title.

Debate away: #HerringFrampton ➡️ Who you taking right now? pic.twitter.com/XIgwTGBhA9

Still, he wasn't happy with the outcome.

"Tony finally caught on, but I didn't want it to end like that," Herring said on ESPN+ following the fight.

"It just got ugly," he added. "I wasn't too satisfied with my performance to be honest with you."

The DQ win ends quite the ordeal for Herring, who twice tested positive for COVID-19, and his bout with Oquendo was postponed twice in July. The former U.S. Marine didn't show any lingering effects of the virus Saturday night, but didn't do himself any favors, either, for fighting Oquendo's fight over several rounds.

Steven Nelson overcame a nasty gash over his left eye caused by a clash of heads to deliver a sixth-round TKO of DeAndre Ware. Nelson, who was dictating the pace of the action, turned Ware's legs into jelly with a left hook, before unloading a barrage of punches that forced the referee to stop the action. With the victory, the 32-year-old Nelson improved to 17-0 with 14 KOs and feels like he's ready for a title eliminator bout next.

Despite the loss, Ware could leave Las Vegas feeling good about himself. The boxer, who also works as an EMT and firefighter, performed CPR on Pete Susens, a coordinator with Top Rank, prior to Friday's weigh-in. Susens suffered a suspected heart attack, as reported by ESPN, with Ware's efforts helping him to survive.

"Happy to say the guy was talking a bit and was alert headed to the hospital," Ware tweeted Friday. "I'm thankful! I feel I saved a life."