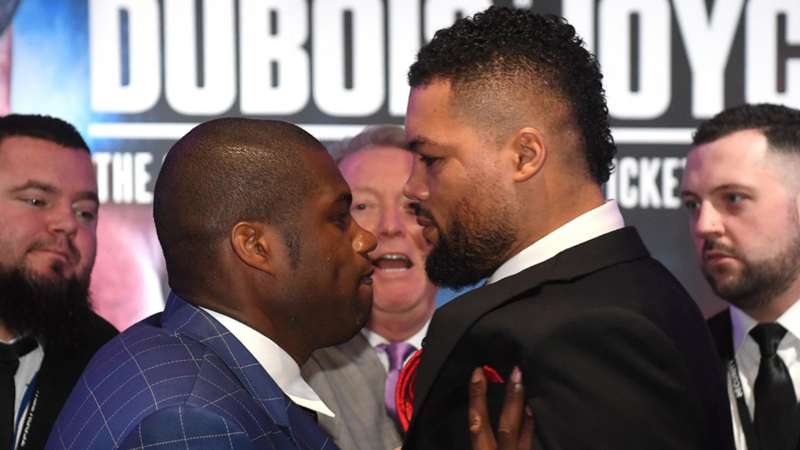 Joe Joyce is 35. Daniel Dubois is 23. Will that play a key role when the two unbeaten British heavyweights finally collide on Nov. 28?

With just a shade over a week until he finally shares a ring with Daniel Dubois, Joe Joyce has addressed the elephant in the room: the 12-year age gap between the two heavyweight prospects.

Both Dubois and Joyce are regarded as potential future world champions with similar degrees of professional fight experience thus far. In fact, 23-year-old Dubois has more bouts at this level to his name than the 35-year-old Joyce, who remained in the amateurs until aged 31 and won an Olympic silver medal at super-heavyweight in Rio.

In an interview with World Boxing News, Joyce, who heads into the Nov. 28 main event as the underdog, insisted that he and Dubois were very evenly-matched, where it matters.

He said: "I don’t feel that old because I only started in the game at the age he is now. I feel like I haven’t been in the sport that long and that I have quite a few years ahead of me.

“But, yeah, this is a big fight and it is a big ladder to the top or a snake where I would have to rebuild.

"So the loser will have to rebuild a little bit and Daniel has got time more on his side because he is a young pup who would definitely be able to come back.

The heavyweight scene has slowly returned to life over the last five years following a distinct lack of depth and box office appeal during the decade of dominance by the Klitschko brothers, Wladimir and Vitali.

With two other Brits currently holding all the gold — Anthony Joshua is the WBA, WBO and IBF champion and will defend on Dec. 12 against Kubrat Pulev, while WBC titleholder Tyson Fury returns to action in 2021 — and a host of other contenders jockeying for position, defeat will likely be a considerable setback for whichever of the two loses their "0" on fight night.

"This is my chance to show what I am made of and to progress to the next stage and get a shot to become heavyweight champion," continued Joyce. “That is the route I am going. My aim before was to get to the Olympics and win a medal, so I completed that, although it was meant to be the gold medal and that didn’t happen.

"As a professional, I want to be world champion and this is the route I need to go down and Dubois is standing in my way right now.”

It will be the first time as a professional that Joyce isn't automatically expected to win. And he's completely okay with that.

He said: “I am not under any pressure because, according to the bookies, Daniel has already won. He has made a big name for himself and he has got the pressure to deliver.

“I don’t know why, but it is okay because it will be better when I beat him because I will take his scalp, how he has been built and take it further.”

Promoter Frank Warren tried to make this fight happen on several dates throughout 2020, with the COVID-19 pandemic scuppering every attempt to welcome even a fraction of a venue's capacity in for the big domestic showdown.

It was then decided to stage the fight at a behind-closed-doors venue rather than drag the issue out any further, with a final eliminator for the WBO heavyweight strap a possible prize for the victor.