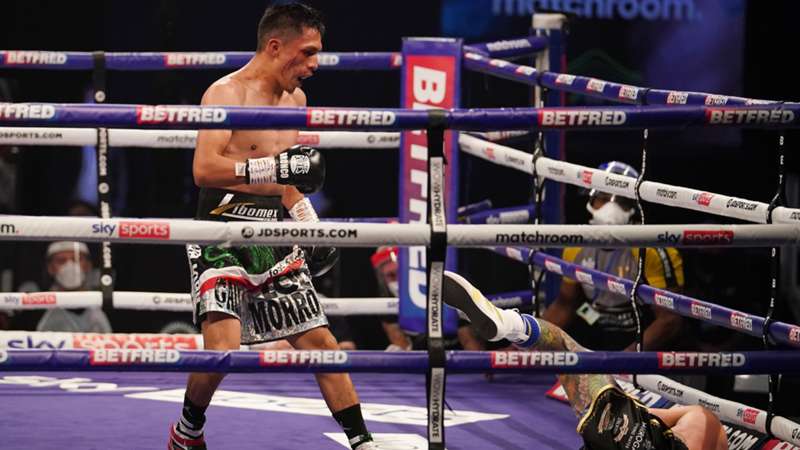 The undefeated featherweight Josh Warrington returns to the ring as he looks to begin his path to another world title reign.

Mauricio Lara flipped the script on Josh Warrington and inflicted a devastating first defeat upon the featherweight division's ace via ninth-round stoppage at the SSE Arena, Wembley.

Warrington had not fought in over a year prior to his first outing without a crowd, due to the COVID-19 pandemic. But after the Brit looked to be easing back into old habits after three solid rounds, he was blasted to the canvas in the fourth.

The former IBF champion appeared to be finished but somehow made it to the end of the round. While Lara's onslaught calmed in the next few rounds and Warrington was able to reel off some more offense, he never looked to have recovered from that nightmare round.

And Lara went in for the kill in the ninth, once again dropping the weakened Warrington to the canvas. This time, the official called it off — though it's arguable that it should have stopped in the fourth.

Warrington (30-1, 7 KOs) did not give a post-match interview as he was taken backstage for additional medical attention. Lara (22-2, 15 KOs), on the other hand, will be feeling like an uncrowned world champion.

"It's been a great night," the victor said via an interpreter. "I'm really happy for my family and all the people back home in Mexico.

"We worked really hard for this and it worked how we planned. Our confidence was because we believed we could do it. I want to thank the United Kingdom for the very warm welcome.

"We were working round-by-round. After the fourth round I did not want to tire myself out as we know Warrington is the number one boxer in the division.

"I go away with a great flavour in my mouth. There is a tinge of sadness that it wasn't for a world title, but that may come in the future.

"I look forward to celebrating with my family. I've not seen them for a while so I'm looking forward to getting back to them."

Barrett did well to recover from a rough first six rounds as the relentless Martinez smothered and roughed him up, but scorecards of 118-111, 118-111 and 116-113 in favour of the Manchester fighter were a huge discredit to Martinez's efforts, whether he did enough to win or not.

Even promoter Eddie Hearn was angered by the scorecards, saying post-fight: "How are we supposed to be able to keep bringing world class international fighters over here when they don't get the credit they deserve?"

Check out updates from the entire fight card from Wembley below.

Lara beats Warrington by KO in the 9th!

facebook twitter whatsapp
Warrington has fought back from the damage of the fourth but hasn't been the same since, and Lara pulls the trigger for a second time in round 9, this time wobbling and then flattening the former world champ! This time, the Leeds man does not get back up and we have ourselves a hell of an upset!

facebook twitter whatsapp
Warrington appears to have somehow weathered one hell of a storm. Lara continues to look for another big power land on an unsteady Warrington, but Josh is slowly getting back into the fight.

Lara explodes to life in Round 4!

facebook twitter whatsapp
Out of nowhere, the bloodied Lara lands a couple of heavy shots flush and continues to follow through to the point of scoring a knockdown! Warrington looks really hurt and struggling to remain upright as Lara goes for the kill, but the former world champ is saved by the bell.

facebook twitter whatsapp
It's been the Warrington showcase we expected so far. Lara is proving to be tough and is landing a few shots of his own, but the snap and the range of Josh's shots has him ahead early on.

The fighters are in the ring

facebook twitter whatsapp
Despite the scorecards leaving a bad taste in fans' mouths, that was a great co-main and now it's time for the headline contest. Josh Warrington vs. Mauricio Lara, 12 rounds at featherweight.

facebook twitter whatsapp
118-111 twice and 116-113 all in favour of Zelfa Barrett. Those are some baffling scorecards. Well, perhaps not so baffling when you consider all three judges are British. Had Zelfa won via UD on three slender scorecards, fair play. But 118-111?

facebook twitter whatsapp
An engrossing chief support bout goes all 12 rounds as Kiko Martinez really troubled Zelfa Barrett, who nonetheless did well to rally in the latter stages. On my card, it's actually a draw at six rounds apiece. Let's see what the judges have to say...

Wood beats Mould via Round 9 TKO

facebook twitter whatsapp
What a great fight! Both men had very strong rounds in this back-and-forth scrap, but Wood scored a knockdown in the fourth and then another in the ninth. When Mould got up from the latter, Wood went right back in to finish with a vicious combination of fast shots and it's waved off. Wood has ended Mould's unbeaten record and claimed the Lonsdale belt in the process.

Interesting fight up next

facebook twitter whatsapp
English featherweight champion Reece Mould (13-0, 6 KOs) puts his unblemished record on the line in a 12-rounder for the vacant British featherweight strap against Leigh Wood (23-2, 13 KOs), who weighed 125 1/4lbs, in what could steal the show.

Smith vs. Appleyard next?

facebook twitter whatsapp
Dalton Smith was at one point poised to fight Lee Appleyard, before the latter was forced to withdraw. Perhaps a re-arrangement is the next logical step for Dalton. And the English title, once held by Appleyard, is vacant at present. That bout to find a new champ makes a lot of sense.

facebook twitter whatsapp
Ellis does not come off his stool for the fourth round after nine minutes of one-sided punishment. Smith continues his rise with another impressive showing early in his pro journey. Great shot selection, composed aggression and a wholly professional job done on Ellis.

facebook twitter whatsapp
From one unbeaten Yorkshire prospect to another, Dalton Smith (6-0, 5 KOs) is up next in a 10-round super-lightweight contest against Ishmael Ellis (11-3, 0 KOs).

facebook twitter whatsapp
The main show begins with Hopey Price (3-0, 1 KO) against Daniel Mendoza (11-11, 4 KOs) in a six-round contest, which should be Price's chance to pick up some more rounds and another learning win.

facebook twitter whatsapp
It's time for Matchroom Boxing's first show of 2021! The main card will get underway shortly at the SSE Arena after one preliminary result...