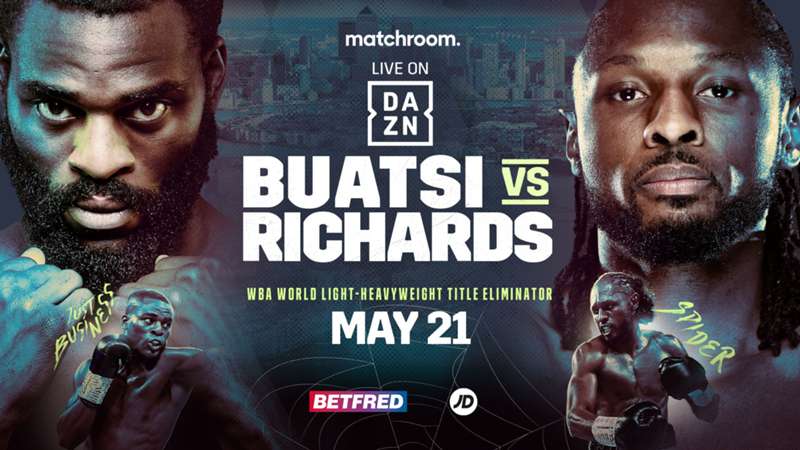 Buatsi scored his 10th knockout in a row when he stopped Latvia’s Ricards Bolotniks in the eleventh round of their WBA eliminator on the third and final week of Matchroom Fight Camp last August. Former British champion Richards put in a spirited display as he pushed Dmitry Bivol all the way in his first world title attempt in May 2021.

“The light-heavyweight scene in this country is thriving and I’m glad that we are able to get one of the biggest fights made," said Buatsi. "The crowd are going to be in for a treat.

"I am coming to win and nothing else, I am sure Richards is doing the same. He had a close fight with Bivol so will want to make things straight, but I have other plans. Win well and then push onto the world title by any means necessary.”

“We’re two top tier fighters from the UK,” said Richards. “This is one of the biggest domestic clashes for a long time.

"This is a very exciting fight for us both, but also one the fans will enjoy. Buatsi has got his plans and I’m sure he be well prepared, but nobody is going to stop me from fulfilling my destiny of becoming a world champion! He is a solid competitor and will be coming to win, but I am confident and believe I have the tools to get the job done. I proved myself at world level and I’m eager to prove that’s where I belong.”

“A big well done and thank you to Joshua and Craig for taking this fight, it’s exactly the kind of fight boxing should be making,” said Eddie Hearn, Matchroom Sport Chairman.

“Two domestic light-heavyweights on the verge of a world title shot decide to put it on the line rather than wait in a queue, giving us a fantastic battle that can only be a thriller. We look forward to a huge night.”

“Who doesn’t love a big domestic dust up? And this certainly fits that description, what a fantastic fight this is set to be,” said Ed Breeze, EVP Rights at DAZN.

“With an electric light-heavyweight scene in the UK, Joshua Buatsi will face a big test on May 21 against former world title challenger Craig Richards. This will be all out action from start to finish, all live and exclusively on DAZN.”