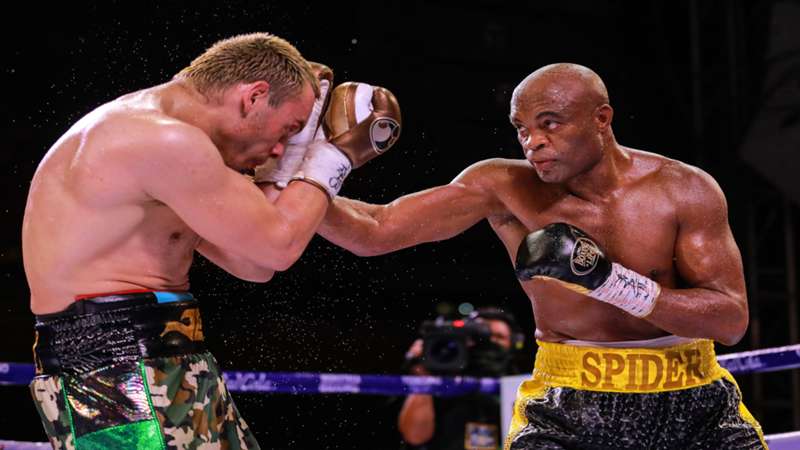 facebook twitter whatsapp
A huge left hook during the waning seconds of the fourth round opens up a gushing cut over Chavez' right eye. The blood is pouring out — something to watch closely.

facebook twitter whatsapp
Alvarez lands a low blow and Chavez thinks the ref is going to give him time to recover. But the ref missed it and Alvarez keeps punching. They both throw hooks at the second-round bell, with Alvarez connecting on his shot with a thud. Intensifying action, with clearly no love lost between these two.

Alvarez unloads on Chavez during opening round

facebook twitter whatsapp
Alvarez caught Chavez with some heavy-handed shots, but inexplicably hesitated to follow up. Chavez is noticeably the bigger man in the ring, with a height and sheer size advantage.

Canelo in the ring in full support of his brother

.@Canelo in the ring talking to the crowd before the #AlvarezChavez3 bout at #TTTK!

Omar Chavez-Ramon Alvarez trilogy up next

facebook twitter whatsapp
Alvarez drew first blood via 10th-round TKO of Chavez during their first clash back in September 2014. Chavez then exacted revenge with a second-round TKO of Alvarez in April 2017. How will this rivalry end between the son of Julio Cesar Chavez and brother of Canelo Alvarez? We're about to find out.

Mina was so gassed by the end of the bout that he could hardly scale the ropes to look out over the crowd — let alone raise his hand in celebration. However, he clearly won this fight.

Mina in complete control, but fatigue might be setting in

facebook twitter whatsapp
Mina splitting Sosa's guard and landing shots with impact. However, he doesn't have the same sting on his punches that he had earlier. That's something to keep an eye on as this bout enters the eighth round.

All Mina so far

facebook twitter whatsapp
Mina taking it to Sosa through three rounds in this bout scheduled for 10. He just seems one step ahead of Sosa right now.

One last time for the legend Julio Cesar Chavez, as the 58-year-old readies himself for his special exhibition with Hector Camacho Jr. later tonight.

.@Jcchavez115 is getting taped up for his final fight. He faces #HectorCamachoJr in an exhibition bout tonight at #TTTK on #FITE!

Canelo by his brother's side backstage

.@Canelo is in the building to support his brother #RamonAlvarez!

Damian "Samurai" Sosa and Abel "Authentico" Mina up next

facebook twitter whatsapp
Judges have it 77-75, 77-74 and 76-74 all in favor of Melendez, who kept the pressure coming following that first-round knockdown. Both Melendez and Torres let their hands fly, but Melendez got the better of the exchanges, even bullying Torres at times. Well-deserved victory.

"Chavez didn't have to do this, but he's doing it," Camacho Jr. said.

He added: "Anything could happen."

But he made sure to mention that  he hopes it doesn't get overly personal and heated between he and Julio Cesar Chavez Sr. in their special exhibition bout later on tonight due to their family history, with Chavez Sr. defeating the late Hector Camacho via unanimous decision back in September 1992.

Canelo in the house

facebook twitter whatsapp
The unified super middleweight champion in the house at Jalisco Stadium to watch his brother Ramon Alvarez, who will be clashing with Omar Chavez, one of Julio Cesar Chavez's sons.

#CaneloAlvarez is in attendance at #TributeToTheKings in show of support for his brother Ramon Alvarez and his nephew, Johan Alvarez who just won his pro debut. pic.twitter.com/4cVJ5J8R2k

facebook twitter whatsapp
Melendez and Torres throw right hooks at the same time during the opening round, but Melendez lands and scores a flash knockdown.

This pay-per-view is live

facebook twitter whatsapp
Welcome to the live coverage of what should be a unique, interesting card to say the least. Keep it locked here for all the live updates, results and highlights from Julio Cesar Chavez Jr. vs. Anderson Silva and Julio Cesar Chavez Sr. vs. Hector Camacho Jr.