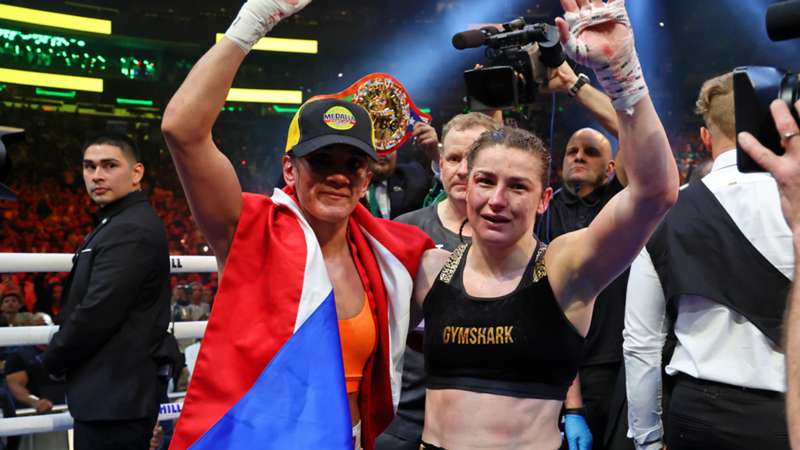 facebook twitter whatsapp
What a fight. What a win for Taylor. And a rematch would be an easy, easy, easy sell.

We go to the scorecards

facebook twitter whatsapp
HOLY (bleep) WHAT A FINAL ROUND - what a tremendous open finish with both fighters exchanging. Serrano ended up cut badly on the right eye when all was said and done, and I think she'll be ruing not putting the finishing touches on Taylor in the fifth because my scorecard reads 7-3 Taylor in rounds.

facebook twitter whatsapp
The referee is having to watch the timekeeper in the closing stages of rounds for his cue, because he's struggling to hear the bell for the noise in the Garden. This round will probably split viewers more than any other. But Taylor's boxing continues to be superior for me.

facebook twitter whatsapp
Taylor's left is catching Serrano coming in time and time again, but this fight could easily come down to fine margins round per round (except the 5th at least) on the cards of the three people whose opinions matter most. For me, it's 5-3 Taylor.

facebook twitter whatsapp
Very close round and another all-action one. I think Serrano edged it, and she finished with the cleaner shots in the closing stages too. 4-3 in rounds to the Irish star.

facebook twitter whatsapp
This fight is fantastic. They are really opening up on each other but, thankfully for Taylor, she's able to avoid the danger she encountered in the fifth for the most part and get back to her style to outland. 4-2 to the champ, but everything to play for still.

facebook twitter whatsapp
HUGE round for Serrano, she really strings them together and has Taylor in serious deep water. Her best, most sustained offense of the fight so far and Taylor looked hurt. 3-2 in rounds to the champ, but will she be able to catch a second wind from that round?

facebook twitter whatsapp
Taylor is switching her approach with enough frequency and variety to keep the challenger guessing, and her tremendous hand speed is keeping her ahead on lands. 3-1 to the champion but Serrano is far from out of this fight.

facebook twitter whatsapp
Fantastic round. Taylor book ends the two minutes with great boxing to edge it, though she was on the receiving end in the middle of it. The bell sounds right after the best exchange f the fight so far. Champ slightly out in front, two rounds to one.

facebook twitter whatsapp
Better from Serrano. Good lands, couple of combinations. Taylor continuing to find ways but I'd say even after two.

facebook twitter whatsapp
Good start to the fight. Taylor looks absolutely zoned in, boxing with speed and precision. Serrano has some joy with a few good aims at the midsection but that's a Taylor round to start.

And we are underway!

facebook twitter whatsapp
Ref gives final instructions, the seconds clear from the ring and here is the bell for round one. 10 rounds, two minutes per round.

facebook twitter whatsapp
And the volume level is showing zero signs of calming down. This is going to be some spectacle. And it isn't too late to tune in!

facebook twitter whatsapp
We have had the Puerto Rican, Irish and American national anthems. Now, here comes the challenger!

Smith wins via stoppage in round 10

facebook twitter whatsapp
It's over! Smith draws stoppage in the 10th! He immediately went back to work at the start of the round and had Vargas in enough trouble on the ropes for it to get waved off. Big performance, huge win!

facebook twitter whatsapp
Great round from Smith, not only steadying back after an improved Vargas eighth but one that could potentially get him over the line in terms of the judges, though we'll see what those three say if it goes the distance. For now, it's 6-3 Beefy on my card.

facebook twitter whatsapp
Best Vargas round in a little while, with better movement and some nice counter-shots. I've got him trailing Smith 3-5 in rounds.

facebook twitter whatsapp
Closer round in terms of clean lands, but Smith is likely to be currying a lot of favor with the judges for the aggression and the control of this one. I've got him up five rounds to two for now.