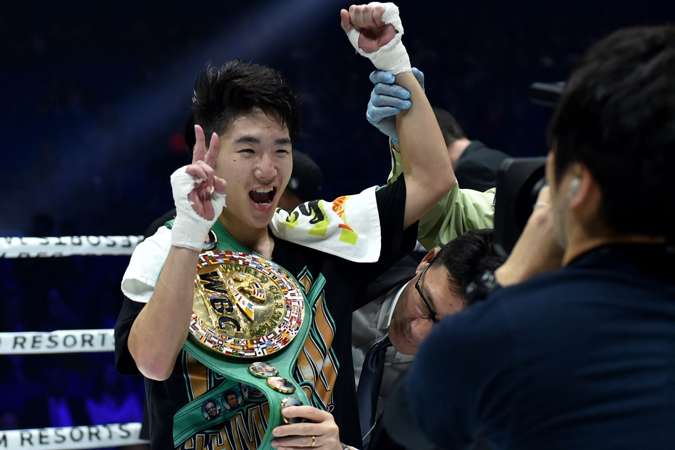 Getty
Check your region for Teraji vs. Kyoguchi on DAZN

A seventh round stoppage for Kenshiro Teraji capped off a dominant performance against Hiroto Kyoguchi which saw him become the WBA and WBC junior flyweight champion.

From the first bell, WBC title holder Teraji dictated the pace of the fight. While Kyoguchi maintained his high guard in an attempt to expose any flaws in his opponent, Teraji got to work and landed a beautiful combination to the body in round one.

Teraji then went to work on breaking Kyoguchi's guard in the second and did exactly that. His jab was proving too much for the 28-year-old who as the fight progressed, began to feel the effects of the countless number of punches Teraji was landing.

As the pace of the fight increased, Kyoguchi was beginning to look more out of his depth, and he was dropped by a Teraji right hand in the fifth, but what followed was something no one expected. Kyoguchi managed to rally and land a few hard-hitting shots of his own in the final minute which brought an end to a potential round of the year contender.

Round six was a much quieter affair, but Teraji didn't let the chaos that was evident in the fifth distract him from the task at hand, he remained disciplined and managed to nullify any threat Kyoguchi might pose using his jab.

The pace was the increased once more by Teraji in the seventh, but it was Kyoguchi who struck first with a right hand, but this spelled the beginning of the end for the WBA champion whose valiant effort came to an end as a result of another Teraji right hand which sent Kygouchi tumbling towards the ropes and forced the referee to stop the fight.

Now holding both the WBC and WBA junior flyweight titles, the path to undisputed is surely the one to pursue for Kenshiro Teraji and one of his potential future foes got the win earlier on the card in the form of WBO junior flyweight champion Johnathan Gonzalez.

Gonzalez managed to overcome promising Japanese prospect Shokichi Iwata who throughout this fight asked serious questions of the defending champion. There were times Iwata troubled the Puerto Rican veteran, but Gonzalez managed to use his experience to snatch the victory after 12 hard-fought rounds with a unanimous decision.

Relive the highlights of the two fights below.

The stoppage was coming and it came in round seven.

Kenshiro Teraji continued to batter Hiroto Kyoguchi and the 28-year-old finally couldn't take anymore after being hit with a right hand.

A dominant and thrilling performance from Teraji who is now the WBA and WBC junior flyweight champion of the world.

After a hectic previous round, Kenshiro Teraji spent this round regaining energy.

He remained disciplined and landed the more meaningful shots against Hiroto Kyoguchi who once again is failing to produce any shots or combinations.

Round 5: Teraji knocks down Kyoguchi

Kenshiro Teraji continued his high work rate and managed to knock down Hiroto Kyoguchi with a right hand.

Kyoguchi managed to regain some composure and ended strongly with Teraji backed up onto the ropes in the final minute.

Round 4: Teraji increases the speed of the fight

An amazing three minutes from Kenshiro Teraji who is fighting at a blistering pace and at one point looked like a stoppage could have been on the cards.

Hiroto Kyoguchi however managed to survive a relentless round.

Hiroto Kyoguchi is able to throw some shots, but not many are landing against an extremely confident Kenshiro Teraji who is enjoying himself in the ring.

Round 2: Teraji establishes the jab

Kenshiro Teraji continues to increase the pressure with his jab managing to find its way past Hiroto Kyoguchi's guard.

Kyoguchi did throw a few punches during the round, but Teraji is the more active fighters.

Round 1: Teraji applies pressure early on

As expected Kenshiro Teraji applies the early pressure, while Hiroto Kyoguchi looks to scout out his opponent and find some flaws.

Teraji was the more active and found success with a combination to his opponent's body.

Teraji vs. Kyoguchi is underway

Teraji vs. Kyoguchi tale of the tape

Here is the tale of the tape ahead of Kenshiro Teraji vs. Hiroto Kyoguchi.

Our main event, the WBC and WBA junior flyweight title clash between Kenshiro Teraji and Hiroto Kyoguchi is up next.

The fans inside the arena eagerly await the arrival of both champions.

Jonathan Gonzalez has retained the WBO junior flyweight title agianst Shokichi Iwata after being awarded the win on the judges' scorecards.

All three ringside officials scored the fight in Gonzalez's favour, two cards read 116-112, whilst the other gave a Gonzalez a wide 117-111 win.

Jonathan González gets the nod after a gruelling fight. How did you score the fight?#TerajiKyoguchi pic.twitter.com/hAPPLwDfu2

Round 12: Iwata chases Gonzalez, but to no avail

Shokichi Iwata tries to hunt down Jonathan Gonzalez, but the WBO junior flyweight champion is able to run circles around Iwata who struggled to pin down the Puerto Rican and unload.

A close fight, one difficult to score, now we await the judges' scorecards.

Round 11: Gonzalez and Iwata set up exciting final round

Jonathan Gonzalez's constant movement is drawing mistakes from Shokichi Iwata and the Puerto Rican is able to capitalise.

We are set for an exciting final round!

Round 10: Another good round from Gonzalez

Jonathan Gonzalez is enjoying a good spell as the fight enters the championship rounds.

The defending WBO junior flyweight title holder is able to mix up his work against Shokichi Iwata and managed to land a thumping right hand.

Shokichi Iwata enters unknown territory as he now reaches the latters stages of a big fight with a vetertan.

Iwata did show glimpses of a path to victory, but Jonathan Gonzalez is showcasing the better work inside and is being more calculated with his punches.

Jonathan Gonzalez is using his experience to frustrate Shokichi Iwata.

Iwata struggled to land any meaningful punches, and whenever it looked like any danger was coming Gonzalez's way, the Puerto Rican leaned in to thwart any attacks.

Round 7: Iwata moves back to the body

Just like the opening rounds, Shokichi Iwata moves back to targeting Jonathan Gonzalez's body with some brutal right hands.

However, Iwata needs to stay focused, after complaining to the referee, he walked onto a Gonzalez combination.

Round 6: Both men go toe-to-toe

The most entertaining round of the fight so far.

Both men went toe-to-toe and traded, a close round, but Iwata edges it.

It's roles reversed in this round with Jonathan Gonzalez taking control of centre ring.

The complaining from Gonzalez has stopped, but now he needs to step it up if he is to beat Shokichi Iwata who is still in control.

Round 4: Gonzalez continues to complain

A much better round from Jonathan Gonzalez, for the first time in the fight he is able to respond to Shokichi Iwata's punches.

However, Gonzalez is continuing to complain about the cut after every meaningful punch landed by Iwata, the Puerto Rican needs to decide whether he wants to stay in there or not.