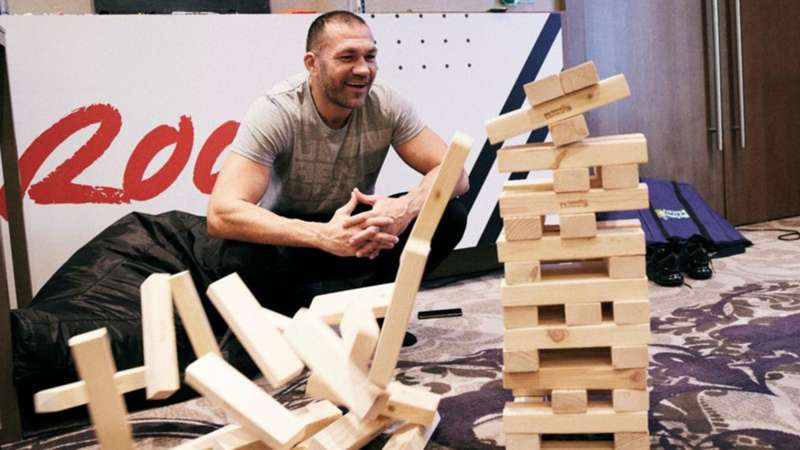 After years of talk, Anthony Joshua and Tyson Fury look set to finally clash in 2021... unless Kubrat Pulev can throw a spanner in the works.

Kubrat Pulev says he will be the reason that Anthony Joshua vs. Tyson Fury in a potential heavyweight unification megafight ultimately never happens.

The Bulgarian will challenge for Joshua's WBO, IBF and WBA titles on Saturday Dec. 12, at the SSE Arena, Wembley. And many expect it to be the last thing standing in the way of Eddie Hearn and Frank Warren sitting down to finalise Joshua vs. Fury for all three of those belts plus Fury's WBC championship in 2021.

Joshua has already been caught out by Andy Ruiz Jr., who dethroned the champ in a huge upset at Madison Square Garden in the summer of 2019 before dropping the titles back to the Brit in their Saudi Arabia rematch six months later.

And the 39-year-old Pulev, who lost his previous title challenge to Wladimir Klitschko back in 2014, has complete confidence in his ability to upset the lucrative apple cart.

"I feel healthy and happy," Pulev told Matchroom Boxing. "I have a lot of energy. After the fight and after the win, I will be really happy.

"I think after this fight I’m going to fight with Tyson Fury. It will be good. I don’t believe that the Joshua vs. Fury fight is going to happen because I will win on Saturday night.

Manny Robles, who trained Ruiz for the unlikely title win, recently offered what he believes to be the key weaknesses that Pulev could exploit in order to replicate the Mexican-American's 2019 feat.

"We see a lot of mistakes from Anthony," continued Pulev. "A lot of bad sides to him. I think these mistakes, and the bad sides, stay.

"The most important thing is how I perform on Saturday night. When I am good, I beat him well. Right now I feel very good, strong and powerful. I am very strong heading into this fight.

"We will see how Joshua performs. I don’t know what to expect from him. It doesn’t matter to me. For me it’s only important what I do in the ring and how I prepare.

"How is my strategy? How is my boxing? This is what is important. I will perform very differently because I have a lot of experience from the Klitschko fight. I will be a new Kubrat Pulev."

Neither Joshua nor Pulev have been able to fight so far in 2020 thanks to the COVID-19 pandemic and the subsequent struggle for the bigger fights to be able to bring fans into the arena.

Saturday's heavyweight title fight will have 1,000 in attendance, however, thanks to a recent change in U.K. health and safety protocol. With a vaccine now beginning distribution in Britain, it is hoped that boxing can slowly but surely return to regular-sized crowds some time in 2021.

Pulev went on to dedicate the fight to his late father, and said he hopes to make his entire nation proud on Saturday.

He explained: “This fight is not only for me. This fight isn’t just for boxing. It is for all of Bulgaria. Nobody from my country has ever been heavyweight champion of the world.

"That’s why it will be so good for my country and my people. Bulgarian fans will be really happy.

"This was my late father’s dream. That is why me and my brother are here. His project was to have sons, and for them to become boxing champions. And we are now real, this is now fact.

"He looks down from above and I’m sure he’s happy. He wants to win on Saturday night with me."

Joshua vs. Pulev airs live Saturday Dec. 12 on Sky Sports Box Office in the U.K. and Ireland, and on DAZN elsewhere — including the U.S. — with a DAZN subscription.