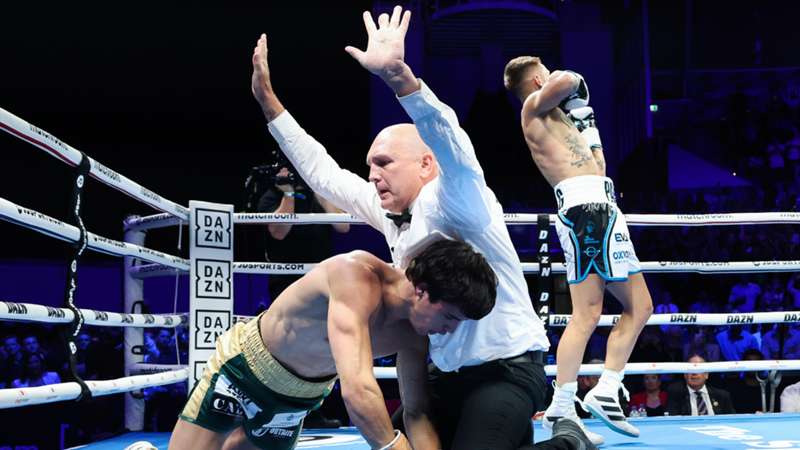 Paro made a statement, as did Demsey McKean and Skye Nicolson.

If Liam Paro didn't have the boxing world's attention prior to Matchroom Boxing's venture into Brisbane, Australia, he certainly does now.

The all-Australian battle of unbeaten prospects between Paro and Brock Jarvis in the headline slot of Saturday's card was over almost as soon as it started, as a few high-tempo opening exchanges quickly made way for Paro's brutal left hand to conclude the card with a champagne finish.

Jarvis looked done as soon as he landed on the canvas, and the referee wisely abandoned his count and waved it off. Thankfully, Jarvis made enough of a recovery moments later to stand of his own accord.

"You don't want to take fighters down like that, but look man, I told everyone I was the best fighter in this country and I proved it tonight," said Paro in the ring after the main event.

"I've said for a while it's my time. I'm here to make a statement. I prepared well for his fight and I shut a few mouths with this win."

Demsey McKean promised a spectacular KO of his own in his heavyweight chief support bout against Patrick Korte, and delivered in round three after a crunching combo of blows sent Korte straight down in a heap. McKean will have his eyes on big-stage bouts such as Dillian Whyte or perhaps even Anthony Joshua in 2023.

Check out all of the official results from the liveblog below, and you can watch the replay right now with a DAZN subscription.

Watch the replay on DAZN!

facebook twitter whatsapp
It was a memorable Australia card for Matchroom, with little surprises in the results but some great action and two champagne finishes at the top. Click here for more details on how to subscribe.

A dream outing for Liam Paro

facebook twitter whatsapp
Brock Jarvis seems okay despite that being a sickening left hand that left the defeated fighter completely unable to get back up and carry on. Shades of Pacquiao on Hatton to that finish.

It's over in round one! Paro wins by KO!

facebook twitter whatsapp
Australian national anthem to be sung, and then it's time for Paro and Jarvis to make their ringwalks. This one should be interesting. Who you got..?

KO in three for McKean

facebook twitter whatsapp
A barrage of hard blows combine to crumble Korte to the canvas, and McKean - who was in the running to be Dillian Whyte's next opponent - could have some intriguing bouts in his future after delivering the big finish he promised he would.

Skye Nicolson is next

facebook twitter whatsapp
Three bouts remain and coming up shortly will be the promising gold medalist Skye Nicolson's fifth pro bout, in what'll be a big career milestone for her fighting on such a big show in her native country.

facebook twitter whatsapp
99-91, 97-93, 97-93 all in favour of Tapia, who remains WBA Oceania super-middleweight champion and will move on to some big opportunities in a stacked division both locally and beyond.

We go to the scorecards

facebook twitter whatsapp
And it should go Tapia's way, as he had the lion's share of the great offense by far. But Sakho showed his toughness, landed a fair few good shots of his own and bolstered his reputation nonetheless in this battle of previously-unbeaten boxers. An absorbing slugfest, worth a rewatch if you have time.

Cesar Mateo Tapla vs. Abdoulaye Sakho/'Mayweather' for the WBA Oceania super-middleweight strap will be on your screens, if you're a DAZN subscriber, imminently.

facebook twitter whatsapp
Rocky Ogden does not get paid by the hour. He went straight in for this one and had Cameron Hands in deep water by the halfway point of the first round before dropping him hard with a jackpot right with 30 seconds remaining. The referee ends his count and calls it off to make Ogden the new Australian super-featherweight champion.

facebook twitter whatsapp
10x3 rounds for the Australian super-featherweight title pits Ben Cameron-Hands against Rocky Ogden in what is our first undefeated vs. undefeated encounter of the card.

So we have Paro vs. Jarvis kicking off with its main card right now, and you can watch along right here with a DAZN subscription.

Elsewhere in the world of boxing, we've also got Claressa Shields vs. Savannah Marshall (with Mayer vs. Baumgardner on the undercard); Deontay Wilder's return to the ring and then back to Australia for Haney vs. Kambosos 2.

facebook twitter whatsapp
Hello and welcome to our live text updates service for the Jarvis-Paro showdown and much more on what is a very busy day for live boxing. Remember DAZN will also be bringing you another wild night of crossover chaos with DAZN X Series 2 later on today, at UK evening time, but for now it's destination: Australia and some morning action for any fight fans in the West.