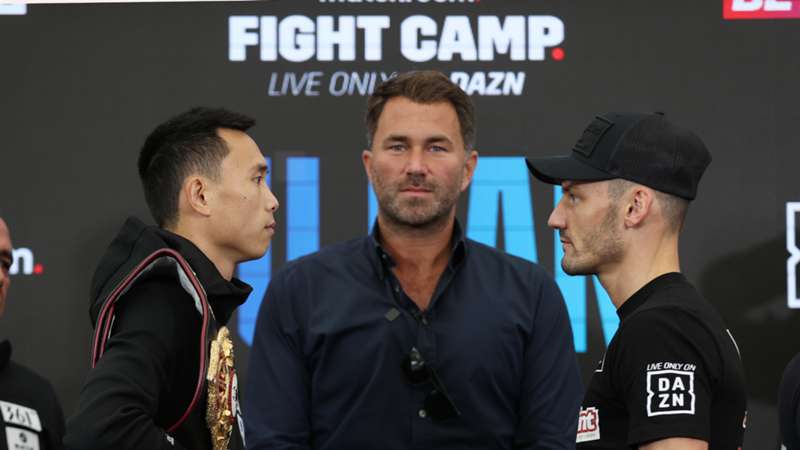 Mark Robinson/Matchroom Boxing
Watch Can vs. Wood only on DAZN (except Aus or NZ)

The DAZN team have its say on the last-minute main event.

The triple-bill kicks off the exciting new era of Matchroom on DAZN in the UK and Ireland, and Can and Wood have a strong likelihood based on previous fights of getting things off to an exciting start in the headline slot.

However, when the dust settles, who will be draping the championship belt over their shoulder?

DAZN's resident boxing fanatics made their attempt to call this one.

The champion's overwhelming punch volume right from the get-go will force this one open. He's the favorite because of this, but this particular style while great to watch also serves as a glass cannon of sorts. Can will be right there to be hit, even if he's connecting with a lot himself. As a result, I cannot see this one going the distance. Unfortunately for Wood, I think the champ outlasts him in this particular duel, but there will no doubt be at least one, probably several chances for the challenger to grab that proverbial brass ring if he can select his shots to perfection, when the inevitable opportunities come.

Winner: Xu Can by KO

Chris Walker: A mountain too steep for brave Wood

I truly believe Wood's reputation will be enhanced at Mascalls, and the main event slot will be a massive if unexpected boost, too. Dave Coldwell explained to me this week exactly how Woody can get the job done, and he definitely can. It's not a pipe dream, like 'if only that guy landed a shot or five on Mayweather, then he'd beat him.' He has the tools and Can will not be far away or particularly well-hidden. But I just feel the ratios of what each fighter can dish out and what each fighter can soak up are edging in the champion's favour, and because of this I can see him cracking the code in the championship rounds.

Winner: Xu Can by KO

Mark Lelinwalla: Volume up for Can overwhelms Wood

Can leaves himself vulnerable due to the sheer volume that he throws punches and Wood will have moments where he can catch the WBA (Regular) featherweight champion. However, those moments will be few and far between, as Can will mash the dash on that volume to simply drown Wood out. I see Can increasing the pressure and punch count toward a 10th-round TKO.

Winner: Xu Can by TKO

Steven Muehlhausen: Pressure will be the name of the game for Can

Can knows one way to fight and one way only, and that's to come forward, apply constant pressure and throw at will. It's hard to prepare for someone like that. When Can does take a break, Wood has to be on the attack. That's his best recipe for success. If he implements it, then he's got a shot. But I just don't see it happening. The onslaught is going to be too much for Wood to overcome and Xu will retain the WBA (Regular) feathweight belt.

Winner: Xu Can by ninth-round TKO