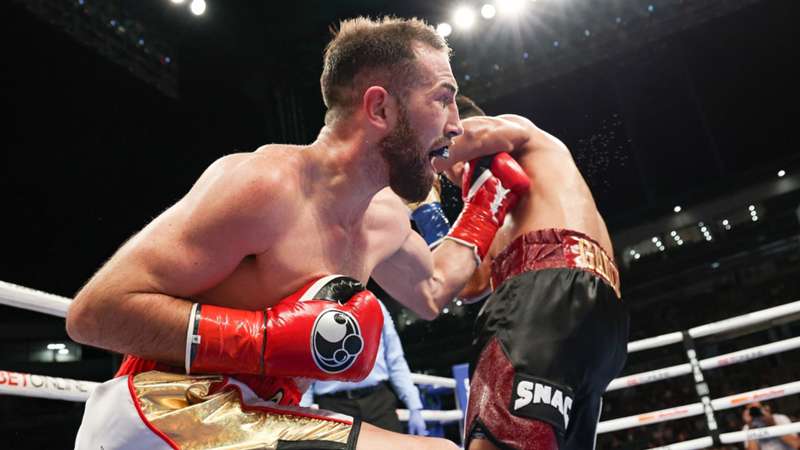 Sandor Martin pulls off a shocker.

FRESNO, Calif. — According to BetMGM, Sandor Martin was a +900 underdog coming into Saturday's fight against Mikey Garcia.

He'd never fought in the United States and had never fought against anyone the caliber of the former four-division world champion. But, none of that mattered to the Spaniard as he came into Garcia's home state and pulled a massive upset to win by majority decision (95-95, 97-93, 97-93) at Chukchansi Park. DAZN News had it scored 96-94 for Martin.

"Mikey is a legend. It's a pleasure to share the ring with him," Martin said through a translator in his post-fight interview with Chris Mannix. "This is the biggest moment of my career."

Despite not much action in the opening round, Martin (39-2, 13 KOs) came out as the aggressor and took the fight to Garcia. He outboxed Garcia from the jump, used his footwork and had better counterpunching.

The power went out to begin the second round, but it was quickly restored. But that brief pause in the action didn't help Garcia, who looked sluggish, and would get Martin into the corner but could not pull the trigger more often than not.

In the ninth round and down on the judges scorecards, Garcia started to land combinations in bunches and stunned Martin for a quick moment. The tenth and final round was an action-packed round with both guys slugging it out to the bell.

Garcia (40-2, 30 KOs) fought for the first time since a February 2020 unanimous decision win over Jessie Vargas. However, he didn't blame the layoff for his performance and would be interested in a rematch.

“I would definitely consider the rematch," Garcia told Mannix. "I think two more rounds could have made the difference. I thought I was coming on better in the later rounds. But there’s no excuses. That’s the way it is.”

Here is what happened at Mikey Garcia vs. Sandor Martin.

Sandor Martin pulls it off and upsets Mikey Garcia

What an upset in Fresno. Who saw that coming?

facebook twitter whatsapp
A left lands for Garcia. Two rights and then a left from Garcia. He needs a big round.

facebook twitter whatsapp
A three-punch combination from Martin. A left hook lands for Garcia. A combination and then a straight right from Martin. A right to the body from Garcia. Combinations blocked from both guys. Tough round to score. (10-9 Martin, 77-75 Martin)

facebook twitter whatsapp
Not much at all in the opening minute. That didn't last long as Martin lands a combination. Loud "Mikey" chants. Really nothing to the round. Both guys, mainly Garcia were content to have a foot off the pedal type of round. (10-9 Martin, 67-66 Martin)

facebook twitter whatsapp
A three-punch combination from Martin. Garcia comes back with two right hands. Two lefts by Martin but Garcia counters with one of his own. Two more lefts for Martin. A short right from Garcia, a right from Martin and then a combination from the native of Spain. The tide is shifting. (10-9 Martin, 57-57)

facebook twitter whatsapp
Martin comes out the aggressor with a couple of left hands. A right lands for Martin. He's finding a home with the right.

A combination by Garcia and now straight jabs. A left hook to the head by Garcia. Martin with a combo abut Garcia with a fout-punch combo of his own. Another combination by Garcia stuns Martin for a moment. Despite the final flurry, Martin controlled thr majority of the round. (10-9 Martin, 48-47 Garcia)

facebook twitter whatsapp
A straight down the middle connects for Garcia. A left by Martin. A right to the shoulder from Garcia. A jab and then a right pushes Martin to the ropes. A left to the body from Martin. A right lands for Martin. He isn't going to go anywhere it seems like. (10-9 Garcia, 39-37 Garcia)

facebook twitter whatsapp
A left followed a right hand for Garcia. A right and then a left for Garcia. A left sends Martin into the corner of the ropes. Martin misses with a left. A combination by Garcia which catches Martin's attention. A left by Martin. Garcia is in a rhythm. (10-9 Garcia, 29-28 Garcia)

facebook twitter whatsapp
They were starting to gp at it and the lights went out for a second. Both guys backed off and they immediately went back on. There's a first.

A quick right buckles Martin. RIght hand is popping early for Garcia. A left and an overhand right lands for Garcia. Narrowly misses an uppercut. A left connects for Garcia. A snapping straight jab for Garcia. Here comes Martin with a left of his own near the end of the round. (10-9 Garcia, 19-19)

facebook twitter whatsapp
Not much in the opening minute. Garcia is trying to gather the data with Martin pawing an occasional left. A left to the body by Martin. A left hook to the head by Garcia. A left and then a right by Garcia. (10-9 Martin)

Martin is a former European super-lightweight champion who competes in the United States for the first time.

It should be a Garcia cakewalk but that's why they fight.

It was all Castro from the jump. He overwhelmed Luna, who had no answer for the Castro's aggression. He blasted with the straight right, flicked a power jab and threw combinations that had Luna dazed and confused.

Castro threw a flurry that was puncuated with a left hand. Luna was on shaky legs but appeared to be ok but he took a knee for an eight-count. Castro didn't take his foot off the gas pedal. He stuck to the plan and threw a left and right hand which was enough for the referee to step in and call it off. The fans roared in approval as the hometown kid jumped to the top rope to soak in the cheers.

Yes, he's 22 and Luna isn't a world beater. But fights against experienced fighters is going to help Castro continue his growth.

facebook twitter whatsapp
In the co-main event of Garcia vs. Martin, Marc Castro (3-0, 3 KOs) squares off with Angel Luna (14-7-1, 7 KOs) in a 131-pound catchweight affair. What a reaction to Castro, who hails from Fresno.

Some interesting scorecards to say the least. It all depends on how you watch a fight. Do you reward slick footwork, counter shots, and in-and-out movement? Or do you reward control of the ring and landing the more powerful shots?

The judges went with the former and we have a new world champion. I felt the Soto was the aggressor and landed the harder shots while more often than not, Gonzalez was riding his bicycle. The crowd wasn't happy from the time the scorecards were read to Gonzalez exiting as he was booed loudly.

facebook twitter whatsapp
Soto and Gonzalez aren't taking a back seat. Soto is stalking and throwing with controlled aggression while Gonzalez is countering well. Things got chippy in the seventh and eighth rounds. A lot of clinching, holding the head and arms down. Could be scored for either guy at this point. Going to come down to these last four rounds.

facebook twitter whatsapp
We have the pure power puncher in Soto against the pure boxer in Gonzalez. Soto has landed the harder shots and stunned Gonzalez twice in the fourth round. Gonzalez' had his moments as well. He's shown good footwork, slipping out of shots and has landed a couple of crisp combinations. Fun fight thus far. Could go either depending on how you look at a fight.

Rodriguez controlled the action from start to finish. He came, he saw, and he conquered to remain undefeated in 14 fights.