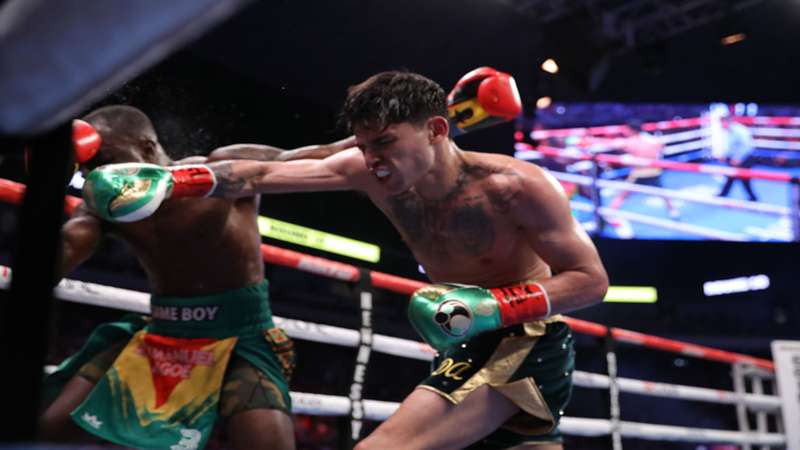 Ryan Garcia did something he never has done Saturday.

SAN ANTONIO — One of the biggest questions heading into his highly anticipated return on Saturday was how Ryan Garcia would look against Emmanuel Tagoe. Would there be ring rust? How would his surgically repaired right hand hold up?

Still Undefeated 🙌 @RyanGarcia improves to 22-0 with a victory in his return 👑 #GarciaTagoe pic.twitter.com/7olfAZoX08

Garcia (22-0, 18 KOs) came out looking to put Tagoe away in the first round. He was pounding the body with his patented left hook and throwing the overhand right. Garcia nearly put him away in the second as he stopped him in his tracks with a right, and Tagoe held on. They came out of the clinch, and Garcia threw a short right that made Tagoe spin and drop to the canvas. As he was the theme for the remainder of the fight, Tagoe held on to survive.

Garcia continued to assert his dominance and attempted to put Tagoe away. He kept stalking Tagoe, landing the left hook and the overhand right. But Tagoe showed a good chin and knew when to hold onto Garcia.

There was one final chance for Garcia to close the show for the rabid crowd. During the 10th round, a right wobbled Tagoe into the ropes. Garcia went for it all but to Tagoe's credit, he grabbed and clung onto Garcia, who went 12 rounds for the first time.

The obvious question now is what's next for Garcia? Plenty of talk has centered around a super fight between Garcia and Gervonta "Tank" Davis. However, Garcia didn't commit to that being his next outing because he doesn't want to disappoint the fans.

"In the past, I'm always those callouts," Garcia said. "But, I've grown and matured, and I'm going to let my team handle it. When it's on, it's on. But as of right now, I'm going to trust my team, and we're going to move forward."

Here is what happened at Ryan Garcia vs. Emmanuel Tagoe.

Ryan Garcia dominates in his return

How can any judge score a round for Tagoe?

Still Undefeated 🙌@RyanGarcia improves to 22-0 with a victory in his return 👑#GarciaTagoe pic.twitter.com/7olfAZoX08

facebook twitter whatsapp
Tagoe tries to hold to make it to the bell while Garcia is still fighting as he connects on a left hook. Garcia cracks a left hook to Tagoe's jaw. How's he standing there? An uppercut to the body from Garcia. It should be a lopsided decision for Garcia. (10-9 Garcia, 120-107 Garcia)

facebook twitter whatsapp
Tagoe starts the 11th with a left. He's got no quit. An overhand right catches Tagoe's attention. Another overhand right for Garcia. Right uppercut and then a right cross by Garcia. Tagoe's offering nothing. He's providing no threat whatsoever. (10-9 Garcia, 110-98 Garcia)

facebook twitter whatsapp
Who would have thought we'd see the 10th round? A left staggers Tagoe. Garcia unleashes a flurry. Tagoe's holding on for dear life. Garcia misses a wild left. Left to the body from Garcia. An overhand lands for Garcia. I thought Garcia would have ended things. Give Tagoe credit for holding on and trying to make it to the 11th round. (10-9 Garcia, 100-89 Garcia)

facebook twitter whatsapp
Tagoe with a combination to begin the ninth. And another one from the native of Ghana. The referee warns Tagoe for continuous holding. Four-punch combination by Garcia. Tagoe fires a right cross. Right uppercut lands for Garcia. Tagoe lands a hard left hook. A combination from Garcia to end the round. Best round of the fight. (10-9 Garcia, 90-80 Garcia)

facebook twitter whatsapp
Garcia begins the seventh with another combination to the body. Like the game plan from Garcia. Tagoe misses a slow overhand right. A right stuns Tagoe and moves him back. Garcia is stalking and looking to close the show. Overhand right connects for Garcia. Three rights and a left to the body by Garcia. Straight right down the middle catches Tagoe flush. (10-9 Garcia, 70-62 Garcia)

facebook twitter whatsapp
Double jab for Tagoe to kick things off in the sixth. Two lefts from Tagoe. Combination to the body, finished by a left hook to the side of Tagoe's head, which shook him for a moment. A quick three-punch combination from Garcia. Three overhand right, and Tagoe is somehow standing. He's tough as nails. (10-9 Garcia, 60-53 Garcia)

facebook twitter whatsapp
An overhand right from Garcia starts the fifth. Double left and a right to the body from Garcia. A quick jab from Garcia. Slow round. Not much action. Combination to the body, and Tagoe sticks his tongue out at Garcia. You know those had their effect. (10-9 Garcia, 50-44 Garcia)

facebook twitter whatsapp
Round four starts with Garcia pounding another left to the body. There is a flurry from Garcia, but Tagoe weathers it and tries a barrage of his own, but Garcia escapes any damage. Combination to the body, Tagoe pounds his chest. A one-two staggers Tagoe, but he recovers. Overhand right down the middle lands again for Garcia. He's feeling it right now. (10-9, 40-35 Garcia)

Tagoe comes wanting to fight as he fires a series of jabs. Garcia walks Tagoe down and blasts a right that catches Tagoe's attention. Digging left to the body from Garcia. Could feel that one. Another left hook stuns Tagoe. (10-9 Garcia, 30-26 Garcia)

facebook twitter whatsapp
Garcia begins the second like he did the first, walking Tagoe down and picking his shots. Stiff jab from Tagoe. A one-two wobbles Tagoe.

Garcia unloads a right to the top of the head, steps back, and blasts a right hook to drop Tagoe.

Tagoe is holding onto dear life, trying to survive the round. And he does. This isn't going to last too much longer. (10-8 Garcia, 20-17 Garcia)

Garcia returns for the first time in 15 months. Will there be any ring rust?

Tagoe has been saying all week that he'll show Garcia the "Ghana Pepper".

The crowd didn't like how Mosley fought, but he fought the smart fight over the gritty Rosado. He used his superior boxing to thwart Rosado and earn the decision win.

Emmanuel Tagoe is gearing up to try to pull off the upset 🇬🇭 #GarciaTagoe pic.twitter.com/7ZdobAjHok

facebook twitter whatsapp
Since they aren't happy with what Rosado and Mosley are providing in the ring, the crowd has decided to do the wave here in the fourth round.

Crowd not happy through two

facebook twitter whatsapp
The crowd is upset at Mosley and Rosado as they want to see more action like the previous two bouts. Instead, it's been more of a technical affair thus far, with Mosley having the advantage.

facebook twitter whatsapp
It's time for the co-main event of Garcia vs. Tagoe as Gabriel Rosado (26-14-1, 15 KOs) takes on Shane Mosley Jr. (17-4, 10 KOs) in super middleweight action. Big fight for Rosado coming off his thrilling loss to Jaime Munguia in November.

A closer fight than the scorecards indicated, as there's no way Esparza won every round. Indeed, she won the contest but not by that wide of a score.

A fun, all-action affair that was unexpected. Interested to see what's next for the two-belt women's flyweight titleholder.

Marlen Esparza adds another title to her name 🥇#GarciaTagoe pic.twitter.com/RmvLsayYVL