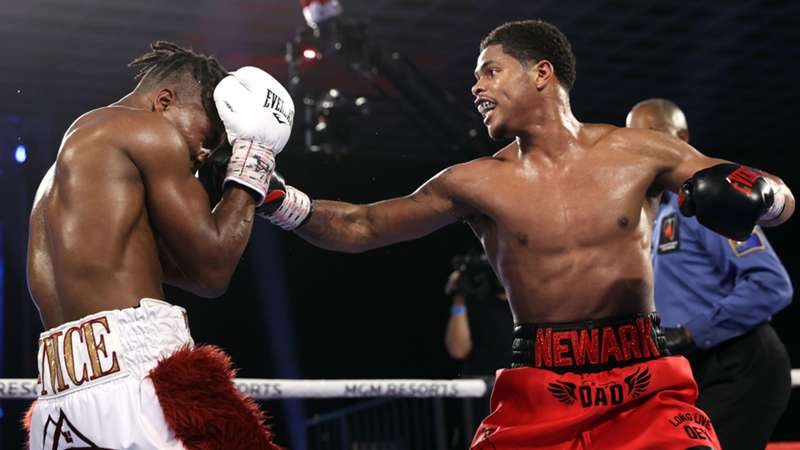 Shakur Stevenson closed out his 2020 by producing one-way traffic against Toka Kahn Clary in a 10-round shutout and unanimous decision win inside “The Bubble” at the MGM Grand Conference Center in Las Vegas on Saturday.

It was easy work from the outset for Stevenson, who overmatched Kahn Clary throughout the 30-minute affair.

It didn’t take long for the 2016 Olympic silver medalist to set the tone as he landed his jab and Kahn Clary quickly realized that Stevenson was several notches above him. The only thing that the Liberian southpaw managed to do was survive.

Shakur Stevenson won every round of his fight against Toka Kahn Clary and the body work was a big reason why 👊 #StevensonClary pic.twitter.com/ocoHMDnDph

The stingy Stevenson only allowed Kahn Clary to land 9 percent of his punches and did everything possible outside of scoring the knockout in what can only be billed as a showcase for the 23-year-old, who is setting himself up for a big 2021.

After his 100-90 clean sweep on all three judges’ scorecards, Stevenson can look ahead to a possible showdown with the winner of next year’s Jamel Herring vs. Carl Frampton fight for Herring’s WBO championship.

"I want the WBO belt first," Stevenson said of his 2021 plans. "The winner of Frampton and Herring have to come see me. After that, we want [WBC world champion Miguel] Berchelt."

In the co-main event, Masayoshi Nakatani peeled himself off the canvas twice to score a stunning ninth-round TKO against Felix Verdejo in a lightweight bout.

Nakatani was dropped twice early in the fight but fought back to stop Verdejo in the 9th round 😲 #StevensonClary pic.twitter.com/A8V7fHPzLo

Nakatani dealt with adversity from the opening bell as Verdejo dropped him with a right hand in the first round. It appeared Nakatani was finished but he showed tremendous resolve and survived the round. Verdejo didn’t let up and dropped Nakatani again in the fourth round. At that point, it seemed as if the train was running away.

Once again, Nakatani regained his composure. Best known for testing Teofimo Lopez last July, Nakatani (19-1, 13 KOs) dug deep and managed to turn the tide in the seventh round. With Verdejo slowing down from throwing a majority of his punches with bad intentions, Nakatani began to land his jab and nailed the Puerto Rican with a right hand.

Verdejo (27-2) briefly regained control in the eighth round as he stunned Nakatani with a right hand after surviving a mid-round surge. But it all came crashing down on Verdejo in the ninth as Nakatani rocked his opponent with a straight right hand just seconds in. A stunned Verdejo attempted to get a hold of Nakatani but ate a blistering jab that put him down.

Although he beat the count, Verdejo was in bad shape and found himself on the wrong end of a Nakatani barrage that put him down for the final time at 1:45 of the round. The referee put an end to the fight at that point.

Edgar Berlanga (16-0, 16 KOs) continued to shock the boxing world by notching his 16th consecutive first-round knockout against Ulises Serra. An opponent has never survived the first round in Berlanga’s young career and Serra was expected to be his toughest test to date considering he had never been finished. Berlanga accepted the challenge, dropped Serra three times and got the stoppage with 20 seconds left. Who will be next for the rising super middleweight?

He did it again 😲

Quincy LaVallais put an end to Clay Collard's Cinderella year with a unanimous decision victory. Collard was being discussed prior to the fight as a contender for Fighter of the Year after winning five straight in 2020, but he was unable to collect No. 6 as LaVallais adjusted to Collard’s pressure and landed right hands at will. LaVallais avoided taking damage while scoring with counters. Judges saw the bout in LaVallais' favor with scores of 78-74, 77-75 and 77-75.