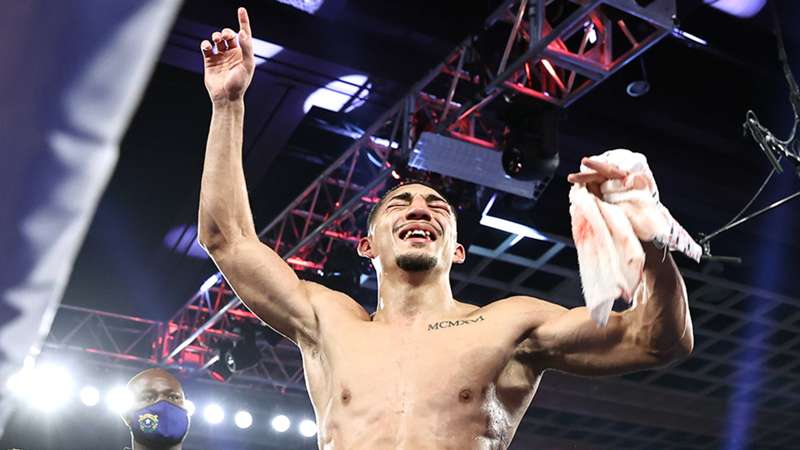 EXCLUSIVE: The unified lightweight champion peels back the curtain of his conversation with the unified super middleweight champ. The two find themselves on a similar path to claiming undisputed glory in their respective divisions.

Saul 'Canelo' Alvarez was making a beeline toward the locker room of the Alamodome in San Antonio, Texas last December, fresh off of putting a lopsided beating on Callum Smith, when someone caught his attention.

That someone was Teofimo Lopez, who was two months removed from his convincing unanimous decision victory over Vasiliy Lomachenko to become the new unified lightweight champion of the world.

Canelo made a detour from his path and approached Lopez, before the two champions embraced and shared words shrouded in mutual respect.

The moment was the epitome of game recognizing game between two of boxing's pound-for-pound best.

During a recent interview with DAZN News, Lopez, who is gearing up for a title defense against George Kambosos Jr. on Saturday, said that Canelo actually surprised him by coming over and confronting him that Dec. 19 night.

"He surprised me at first," Lopez told DAZN News of his initial reaction toward the face of boxing taking some time out to speak. "When I went to his event in San Antonio, Texas, when he fought Callum Smith, seeing the way he was and I went back to his locker room after the fight, after his win, and we respected each other on that level."

In hindsight, Lopez believes the matter-of-fact style that he handled Loma with in their fight might have placed him onto Canelo's radar.

"The amount of respect for what he's done and I guess what I did against Lomachenko, I guess I earned his respect there," he continued. "It's warming to see a champion like himself, how he carries himself outside the ring and how he is inside the ring, but more effectively is just the person that he is."

Peeling back the curtain to their backstage conversation a bit, Lopez offered that besides the two champions saluting each other's success that he was especially touched by the boxing king's humility and warmth.

"He earned stripes even more just the way he was warm and welcoming to me and my father," Lopez tacked on. "And we got to joke around a little bit. Good talks, man. He invited me to his gym at any given time and pretty much said we're family whenever."

Perhaps Lopez will take Canelo up on that offer soon. After all, the two warriors find themselves in a similar position — just one missing piece away from attaining undisputed glory.

Canelo got one step closer to becoming the undisputed super middleweight king last month, when he made Billy Joe Saunders quit on his stool following the eighth round. The WBA, WBC and WBO champion hasn't minced words in trying to secure a tilt with IBF titleholder Caleb Plant for the right to own all the major 168-pound belts.

"My whole goal is to really — not just beat him convincingly — but to knock his head off,” Lopez told DAZN News.

As part of the same interview, Lopez expressed a desire to subsequently move up to 140 pounds and lock down a clash with junior welterweight undisputed champion Josh Taylor as well. He also mentioned how a stint at welterweight, 154 pounds and possibly even 160 might all be in the cards for him.

With Canelo being a four-division world champion, Lopez won't have to look far for the inspiration. Or better yet, since they have a rapport — a deeper conversation.