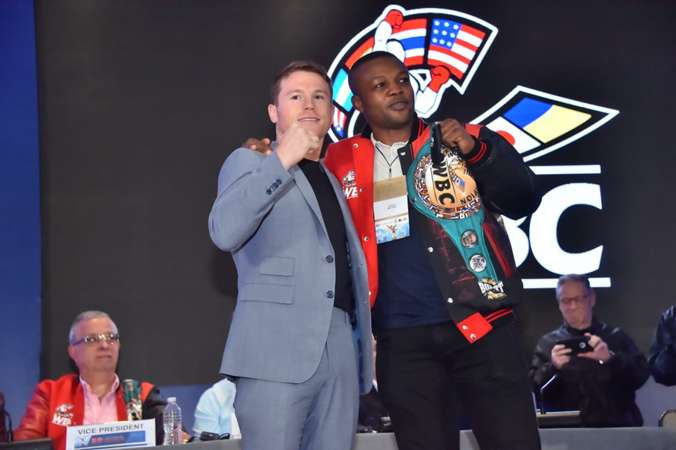 Tony Bellew says Junior Makabu has to make an early impression against Saul 'Canelo' Alvarez. With a move to cruiserweight long speculated, Canelo finally pulled the trigger on the huge leap in weight when he came face to face with the Congolese champion at the WBC convention last week.

After securing world titles in four divisions already, Canelo is aiming for five, and that will come if he can get past Makabu in an intriguing battle that is likely to take place next May. After recently competing at 168lbs, Canelo will likely have to put on close to a stone as he looks to add to his legacy in one of boxing’s most dangerous weight classes.

Bellew, who secured his own magical moment with victory over Makabu at Goodison Park in 2016, is fascinated by the fight. After studying the African fighter massively in the build-up to his own fight with him, the retired fighter is well positioned to offer a verdict on the man he stopped inside three rounds five years ago.

“Makabu likes to have a look and that’s why tried to jump on him in our fight,” said Bellew when speaking to DAZN.

“He’s very relaxed in the early rounds because he wants to have a proper look at what’s in front of him then go to work in the later rounds. I wasn’t going to give him that opportunity and that’s why I started as quick as I did.

“Makabu has a high guard and dangerous left hand and he has to get that into play from the first bell. Canelo is going to come in heavy so he could lose some of what makes him special but Makabu will still be the bigger man and he has to make that count. His size can be a big asset but he has to use it from the moment the fight starts otherwise he’ll be playing catch up against the best fighter in the sport.”