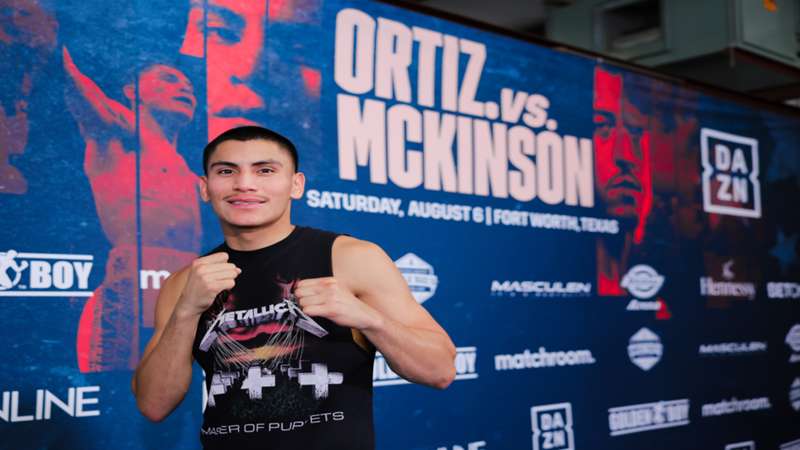 Vergil Ortiz returns for the first time in nearly a year on Saturday.

All systems were go for Vergil Ortiz Jr. heading into his 2022 debut in March against Michael McKinson. He appeared to be set and ready for this to be the year where a world title opportunity would await him.

Life doesn't always give you what you want. During fight week, Ortiz was diagnosed with rhabdomyolysis. He went to the hospital and ended up being forced out of the fight.

"Just a few weeks before the fight, maybe almost a month," Ortiz tells DAZN. "But you know, we just attributed it to fatigue, weakness. Something that will pass really quick. But it didn't pass. It actually kept getting worse. So we got it checked out. That's when a doctor diagnosed (me) for whatever (rhabdomyolysis)."

McKinson (22-0, 2 KOs) remained on the card but went through the ringer of having to find an opponent. After some pullouts, Alex Martin stepped up to the plate. Despite all the starts and stops, McKinson got the job done, winning by unanimous decision to remain undefeated. Not being able to fight is frustrating for any fighter because this is what they do for a living. Ortiz was conflicted on how he felt until fight night when McKinson and Martin were in the ring. Then it hit him that he wasn't doing what he loves.

"It was frustrating," Ortiz said. "I didn't necessarily feel frustrated. At that moment, I was honestly kind of more relieved that it was actually something because if they couldn't find anything that says like, ‘Oh, what's wrong?’ But I definitely felt the frustration the night of the fight when I was watching the fight. And I was just like, ‘It should have been me out there right now.’"

Ortiz (18-0, 18 KOs) wasn't sidelined for too long. He was holed up for about three weeks, playing his guitar and video games before hitting the gym and prepping for his in-ring return. As Ortiz worked his way back to health, people were saying he should no longer compete at welterweight and move up to 154 pounds as they blamed the diagnosis on a hard weight cut even though his symptoms weren't related to such. Ortiz responded to those who feel he needs to be at junior middleweight.

"They weren't a part of the training camp, and they don't know what's going on," Ortiz retorted. "So I just pushed it to the side. I didn't really care about what they had to say.

"Making weight is not an easy thing to do as it is. But I’m staying until I get a world title. And it's not like I'm forcing myself to stay. I feel great."

When it came time to pick Ortiz's opponent, his promoter Oscar De La Hoya, looked far and wide to get him a big fight. But the road led them back to McKinson. It's one McKinson wanted and one the 24-year-old Ortiz felt was bound to happen. So here we are as Ortiz looks to keep his undefeated and knockout record intact. He feels confident in a victory but isn't sure if the KO will come.

"I hope I remain undefeated right?," Ortiz said. "That's always the goal. As far as by knockout,  I really don't know. I'm not gonna go for the knockout, especially with a guy like this. If you go for a knockout against the guy who's already waiting for you to come in with his traps and all that stuff, you're gonna have a bad time. So we're gonna go and take things as it goes, take our time, and I'll get him out of there if the opportunity comes."