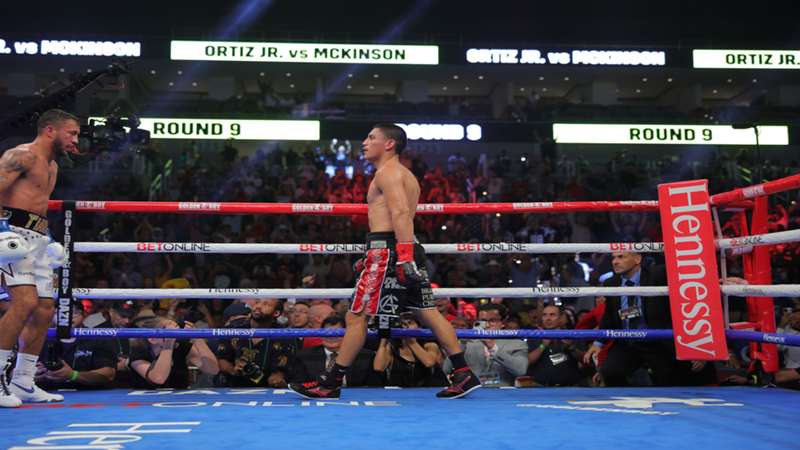 Someone's "0" had to go on Saturday when Vergil Ortiz Jr. and Michael McKinson squared off. Coming in, Ortiz was 18-0 with 18 knockouts, and McKinson was 22-0. It was the power of Ortiz against the technical prowess of McKinson.

When it came down to it, the brutality of Ortiz's shots wore McKinson down as the former stopped the Englishman at the 0:27 mark of the ninth round from Dickies Arena in Fort Worth, Texas. DAZN scored the fight 80-71 at the time of the stoppage.

“Honestly, I thought I didn’t really do anything good (in the first seven rounds)," Ortiz told DAZN's Chris Mannix in his post-fight interview. "I had to adjust big time. I should have listened to my corner from the beginning.

“I felt like I figured him out in the first round but just went away from it. My corner had the game plan laid out, my dad bitched me out for three or four rounds, and I finally listened to him, and we got him out of there.”

After a competitive first round, Ortiz took control from there. He outgunned McKinson, landing shots wherever the Brit was attempting to move. Whether it was the arm, shoulder, body, or head, it didn't matter to the 24-year-old. As long the body part was within distance, Ortiz was throwing a hook, a jab, or an uppercut to inflict as much damage as possible.

In the middle part of the fight, Ortiz started to make an emphasis on the body. He was relentless with uppercuts and digging hooks to let McKinson know it would only be a matter of time, and that was how the fight would end.

With about 30 seconds to go in the eighth round and WBO welterweight champion and one of boxing's top pound-for-pound fighters in Terence Crawford, Ortiz was stalking McKinson and connected on a picture-perfect body shot to send McKinson to the canvas for the first time in his professional career.

McKinson survived the round but wouldn't make it through the following round. To begin the ninth, Ortiz charged right at McKinson, threw a left to the body, and McKinson crumbled to the mat on two knees. He made it back to his feet, but Ortiz knew he had McKinson where he wanted him. He chased McKinson around the ring throwing shots. Seeing that McKinson was in serious trouble, his corner waved the white towel, and the fight was stopped, and Ortiz's undefeated record and knockout streak remained perfect.

Despite Crawford being in attendance, Ortiz was respectful because negotiations are still ongoing for a fight between Crawford and three-belt champion Errol Spence Jr. But if it doesn't get made, Ortiz will be ready.

"Yes sir," Ortiz said to Mannix if he was ready for a title shot. "But if the opportunity comes up, I’ll be more than happy to fight him."

Here is what happened at Vergil Ortiz Jr. vs. Michael McKinson.

facebook twitter whatsapp
It only took 32 seconds into the fight, but a hard shot to the liver sent Janjanin crumbling to the mat. To his credit, Janjanin winced up to his feet, but he made it up. Melikuziev stayed composed and landed several power shots, but Janjanin made it through the round.

It should be an exciting night with one of boxing's youngest stars in the main event. Stay locked as we will have live updates, results, and main card highlights.