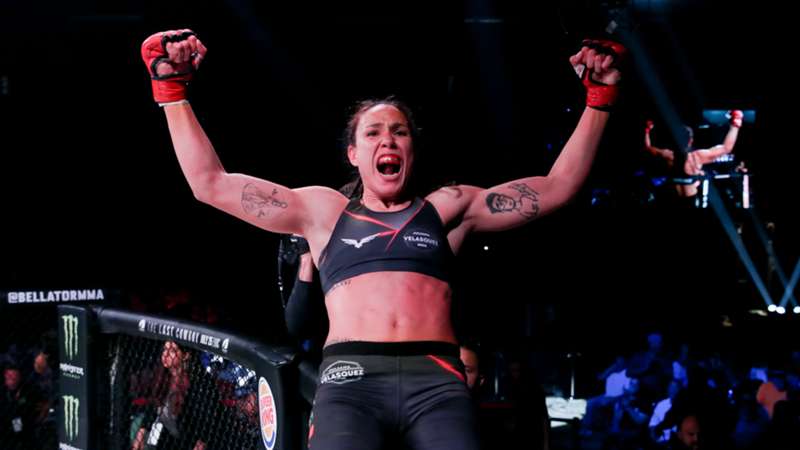 Juliana Velasquez's size and strength proved too much for Ilima-Lei Macfarlane to handle as the Brazilian became Bellator's second women's flyweight champion.

The unbeaten Velasquez used her size and reach advantage to fend off the advances of Bellator's inaugural flyweight champion and earn scores of 48-47, 49-46 and 48-47 from the judges in a nip-and-tuck affair to close out Bellator's year of events.

The first round was a feeling-out of sorts. Macfarlane tried to find her range while Velasquez looked to see what the champion had to offer. Macfarlane recognized that the size advantage was going to be a huge challenge to overcome and took more risks in the second frame by rushing in the strikes with more frequency. Macfarlane attempted a takedown late but Velasquez defended and ended up in the champion's guard.

Macfarlane attempted a leg pick takedown in the third but Velasquez defended well and landed several strikes that caused a cut. Velasquez continued to hold her ground and throw a counter hook whenever Macfarlane closed the distance before firing off a flying knee that landed at the end of the round.

🦵💥 That connected!@JuVelasquezMMA and @Ilimanator are headed into the championship rounds of their #Bellator254 main event LIVE & FREE now on @CBSSportsNet.#USOHolidays #MMA #Bellator pic.twitter.com/XYzq31wFEf

With a blood streaming from above her brow and nose, Macfarlane finally secured a takedown with less than two minutes remaining in the fourth round. Although she was unable to land anything of significance, she swung the momentum to her side by landing short strikes. She attempted the same strategy in the final round but Velasquez defended the takedown and landed in Macfarlane's guard, where she held position for a few moments before deciding to bring the fight back to the feet. Macfarlane immediately sought another takedown from the clinch. They stayed along the fence until Velasquez scored a takedown with a judo throw in the last second.

A new era for the women of the featherweight division will start in 2021 with Velasquez (11-0) as their queen.

In the co-main event, Magomed Magomedov put on a grappling clinic and dominated Matheus Mattos to score a unanimous decision in bantamweight action. Magomedov made a statement in his Bellator debut against the once-beaten Mattos as he neutralized any offensive effort by his opponent. From the opening bell, Magmedov latched onto Mattos and dragged the fight to the canvas. He would then either chain submission attempts together or maintain a dominant position. All Mattos was able to do was attempt to scramble to survive. Magomedov took Mattos down seven times in 15 minutes to secure the decision with scores of 30-27, 30-27 and 30-26.