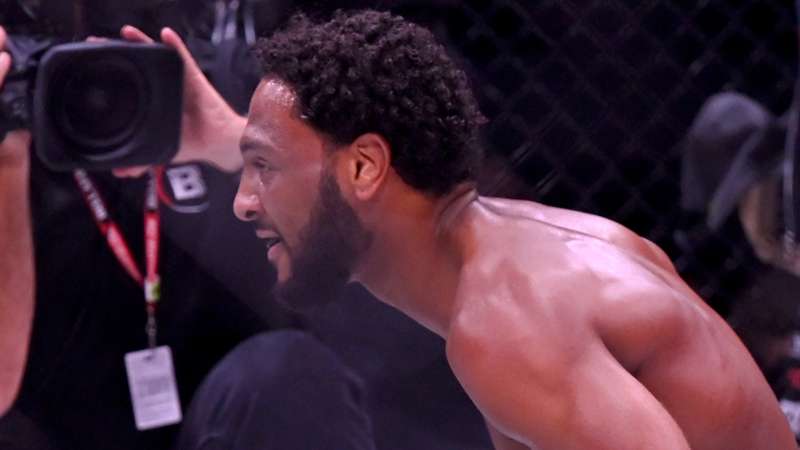 Just like that, McKee secured a $1 million bag, catapulting his star power in the process.

Bellator has a booming superstar on its hands, and he's the new featherweight king — not to mention $1 million richer.

In what was billed as the most important fight in Bellator history, A.J. McKee submitted Patricio "Pitbull" Freire with a first-round submission on a standing guillotine choke that has long been known as the Brazilian fighter's signature finish of choice. And just like that, McKee became the new world featherweight champion at Bellator 263, securing the $1 million that came with winning the Featherweight World Grand Prix at The Forum in Inglewood, Calif., on Saturday night.

For the undefeated 26-year-old McKee (18-0), the moment marked a full circle in his young life, considering the Long Beach, Calif. native wrote a check to himself for $1 million when he was 12.

"Honestly, I dreamt the fight," said McKee during the post-fight press conference about how he envisioned the bout. "I knew I won the fight. I prayed about it and same night I had a vision."

Although he mentioned trying to become a double champ next, McKee added: "I'm the best 145-pounder in the world — the world. I don't care who it is. I'm gonna show up and show out every time."

McKee brought the raucous Inglewood crowd to its feet by blasting Freire flush with a head kick to stun the Brazilian. Then, sensing "Pitbull" was badly hurt, McKee moved in for the kill with a lightning-quick flurry of punches to drop Freire with a thud. Though McKee threw his hands up in a premature celebration, he quickly realized that the job wasn't complete just yet and cinched in a standing guillotine choke to submit Freire, who was pressed up against the cage, for the first time in his career. The emphatic win took McKee only 1:57 to produce.

The manner at which McKee won only added insult to injury, as Freire counts six of his victories by guillotine choke only for Bellator's present and future to dethrone its legendary GOAT with the same maneuver. Despite all the bad blood between the two fighters during the buildup to the main event, McKee and Freire embraced in a sign of respect following the bout as the 34-year-old Pitbull was resigned to saluting "The Mercenary."

Both fighters emerge feeling each other out. McKee looking to assert his massive eight-inch reach advantage. Pitbull keeping a wide distance. McKee rocks Pitbull with a head kick which lands squarely. He throws a lightning-quick flurry to drop Pitbull. McKee throws his hands up in a premature celebration, before locking in a guillotine choke with Pitbull pressed up against the cage. It's over!! Your winner and NEW featherweight world champion is A.J. McKee.

And here comes the champ Pitbull

The Brazilian flag draped over his shoulders, can the defending champion "Pitbull" cement his legacy by yet another notch by handing McKee his first loss?

👑 The Champ-Champ Is Here!@PatricioPitbull looks to defend his strap once more at #Bellator263.

McKee walks to the cage to the sounds of Dr. Dre featuring Snoop Dogg "Nuthin' But A 'G' Thang" and aptly Lil Wayne's "A Milli." The Long Beach, Calif. native looks hyped and ready for the biggest fight of his life.

.@AJMcKee101 looks for his 18th straight win inside the Bellator cage NEXT at #Bellator263.

A.J. McKee wrote a check to himself for a $1 million when he was 12. Now, he has a chance to secure it for real. McKee challenges "Pitbull" for the featherweight world title and a cool $1 million in the Featherweight World Grand Prix final. With all the bad blood between the two during the buildup, Bellator's GOAT against its future is upon us.

Judges have it 29-28, 30-27 and 30-27 all in favor of Burnell. The Danish fighter had seven takedowns to propel him to victory as judges thought his ground game was more effective than the 82 strikes that Sanchez landed. Don't agree with the unanimous decision, but I do feel like Burnell rightfully won. Big win for Burnell, who entered this bout as the No. 8 featherweight, and knocked off the second-ranked Sanchez.

Sanchez vs. Burnell; Round 3

facebook twitter whatsapp
Burnell changes levels and secures yet another takedown. Burnell takes Sanchez's back and threatens a choke. But Sanchez with some stiff back elbows and punches to get back up to his feet. Sanchez grapples and gains side control. Burnell scrambles and takes top position. Burnell is making this his fight with the ground game. He's maintaining top position, stifling Sanchez's firepower. Burnell's round and possibly fight. Let's see how the judges score this one. (10-9 Burnell, 29-28 Burnell)

Sanchez vs. Burnell; Round 2

facebook twitter whatsapp
Sanchez again pressing forward with strikes. Sanchez with a left-right combination and another, though he finishes the second combo with a hard right elbow. Burnell now connecting with his hands. What a fight with an absolutely frenetic pace thus far. Burnell ducks under a spinning back kick from Sanchez right in time. Burnell scores another takedown moments later. This time, the takedown nabs the round for Burnell. (10-9 Burnell, 19-19)

Sanchez vs. Burnell; Round 1

Sanchez with a flurry of punches, high kick and straight right to brush Burnell back in the opening seconds. Burnell with a hard overhand right moments later. Sanchez goes to the body and then unleashes an elbow strike to the head of Burnell as well. Even exchanges in the center of the cage, as both men are throwing fire with bad intentions.

Sanchez putting together multiple combinations, as he's getting the better of the exchanges. He needs to watch out for pointed shots from Burnell. The Danish fighter ends Sanchez's firepower with a takedown. Smart move as Sanchez was pouring it on. Sanchez back up to his feet and adding to his volume of punches with a left hook, uppercut combo. Another takedown from Burnell in the waning seconds, although it's not enough to measure up to Sanchez's output. (10-9 Sanchez)

This fight is 🔥@BurnellMMA forced to secure the takedown on @MatadorSanchez_.

Featherweight co-main event up next

facebook twitter whatsapp
Emmanuel Sanchez vs. Mads Burnell in the co-feature spot before the headliners take the cage. Sanchez looks to bounce back from a loss to champion Patrício "Pitbull" Freire in April, while Burnell looks to extend his winning streak to seven.

A.J. McKee is in the house

"The Mercenary" is in our midst!@AJMckee101 will challenge the champ in just a few moments LIVE on Showtime Sports.#Bellator263 pic.twitter.com/SNOLgeLmS8

Two high kicks connect for Nurmagomedov, who then swiftly takes Muro down. Muro makes it back to his feet and Nurmagomedov takes him down again. Tactical, smooth output from Nurmagomedov, who's in complete control early on. Oh my! Nurmagomedov plants a knee into Muro's liver and Muro crashes to the canvas with a thud. Nurmagomedov drives some hammerfists home and this one is over!

The Nurmagomedov bloodline is strong.

facebook twitter whatsapp
The third straight lightweight bout is upon us. Nurmagomedov is Khabib Nurmagomedov's younger cousin with a wealth of skills as evidenced by his 12-0 record. He takes on the 12-6 Muro. Khabib is in Usman's corner.

facebook twitter whatsapp
Judges score it 29-28 for Mamedov, 29-28 for Primus and 29-28 for Mamedov, as the Dagestani fighter gets the big victory over the former lightweight champion. Although Mamedov dominated top control, Primus was highly effective from the bottom position, as he stifled Mamedov's offense and even threatened submissions while on his back during all three rounds. Credit Mamedov for the three takedowns, but Primus was very busy on the ground every time he was on his back.

Brent Primus vs. Islam Mamedov up next

facebook twitter whatsapp
Another lightweight tilt on deck, as each of these fighters count one loss on his ledger. Primus's one defeat came at the hands of Michael Chandler. The Dagestani technician Mamedov's sole loss came outside of Bellator against Alexander Sarnavskiy. In Mamedov's corner is none other than former UFC lightweight king Khabib Nurmagomedov.

Gonzalez and Yamauchi were trading heavy hands when Yamauchi split the Chicago fighter's guard with a sharp right down the middle, following it up with a crips left-right combo to drop him with a thud. Yamauchi then put the finishing thuds on for the first-round TKO, handing Gonzalez his first loss.

That was a TREMENDOUS showing from @GoitiOfficial!

Unbelievably, this victory only marks Yamauchi's second win by knockout. The Japanese-born Brazilian MMA fighter has 20 of his 26 wins by submission — the most submission victories in Bellator.

And already, Yamauchi generates interest for his next fight.

facebook twitter whatsapp
We begin with Chris Gonzalez vs. Goiti Yamauchi. Gonzalez enters the cage to 50 Cent's "Many Men" and many men have tried and failed to stop him, as the Chicago native is 6-0. Yamauchi enters the cage to "You're The Best Around" from Karate Kid fame.

facebook twitter whatsapp
Hello and welcome to the live coverage of Bellator 263: Patricio "Pitbull" Freire vs. A.J. McKee. Keep it locked here for all the live updates, results and highlights from this main card.