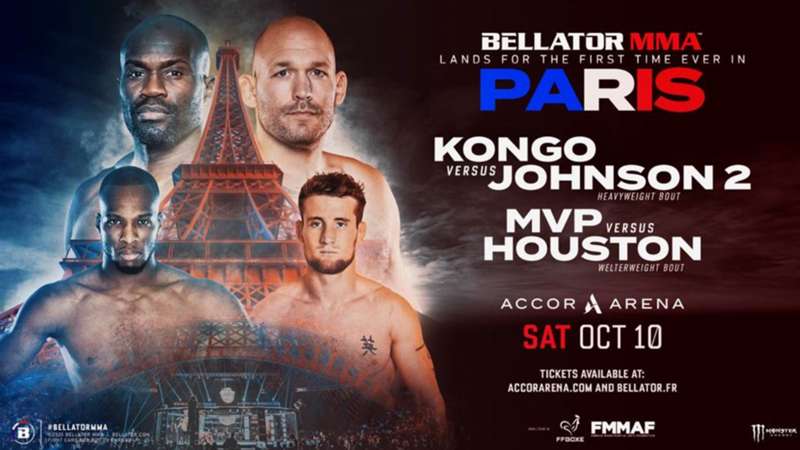 Now that mixed martial arts has been approved in France, Bellator will head to Paris for a major show on Oct. 10, with a limited number of fans allowed to attend.

Bellator will make their France debut with a show at the Accor Arena in Paris on Oct. 10, headlined by the nation's own Cheick Kongo (30-10-2) facing Tim Johnson (14-6) in a heavyweight rematch.

Kongo, 45, was last in action at Bellator 226 last September when he challenged heavyweight champion Ryan Bader in a fight that ultimately would not register on either man's official professional record after an accidental eye poke from champion to challenger led to a no-contest.

Kongo and Johnson last faced off at Bellator 208 in October 2018 in a victory for the Frenchman after just one minute and eight seconds via punches to force a stoppage.

And a monumental homecoming win to go 2-0 against the 35-year-old American would be some way to prepare for another championship challenge — although spoiling the party would surely ensure Johnson is next in line instead.

“This is a monumental moment in the history of the sport, as well as our organization, and I am honored that Bellator will promote the very first MMA event in France by a major promotion,” said Bellator president Scott Coker.

“Many people have worked tirelessly to bring this to fruition, and it would not have been possible without the support of the Minister of Sports, Roxana Maracineanu, as well as the French Kickboxing Federation sanctioning body.

"I would also like to thank Accor Arena, who have been an incredible venue partner, and I cannot wait for the French fans to be in attendance and join us live for what will be an unforgettable night of action in Paris on Oct 10.”

In chief support, Britain's Michael "Venom" Page (17-1) faces a stern test in the form of the debuting and undefeated Scotland's Ross Houston (8-0) at welterweight.

No other fights have been announced for the card so far, but more are expected to be confirmed by Bellator soon.