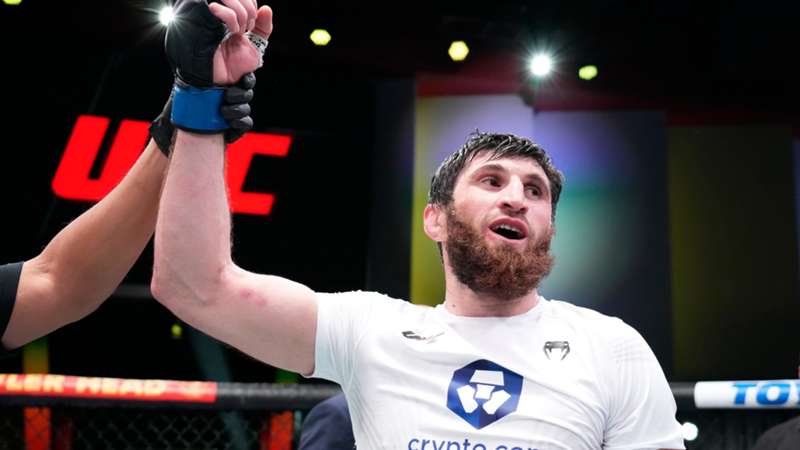 Glover Teixeira has sights set on facing the winner of Saturday's main event.

Former UFC light heavyweight champion Glover Teixeira has made his prediction for the main event at UFC 282.

Jan Blachowicz and Magomed Ankalaev are set to go head-to-head this weekend in Las Vegas for the vacant title, and Teixeira believes the ground game will play a vital role in who emerges victorious.

"I think Anklaev is going to win because he’s a counter puncher, he’s just a better wrestler," Teixeira said in an exclusive interview with DAZN.

"If you get trapped, he’s going to go for the ground."

Teixeira will have an eager eye on Saturday's fight as he looks to face the winner to reclaim the title after losing to Jiří Procházka at UFC 275.

The pair were originally set for a rematch at UFC 282, but a shoulder injury to Procházka forced him to vacate the title. Teixeira then refused to face Ankalaev which resulted in Blachowicz being promoted from the chief support to the main event.

Teixeira, who is an ambassador for Stake ahead of UFC 282,  expects to be in the conversation to face the winner of Saturday's main event, but he will only take a step back if Procházka makes a quick recovery.

"No, I haven’t talked with anybody, hopefully next week I’m going to Vegas to talk to my manager and we’ll get some answers," Teixeira responded when asked whether he had been given any assurances that he will be facing the winner of Blachowicz vs. Ankalaev.

"Jiří is out for the year, if Jiří  comes back in six months and fights for the title, it’s a different story."

Fans in Germany, Italy and Austria can see if Jan Blachowicz can become a two-time UFC light heavyweight champion when he faces Magomed Ankalaev for the vacant title at UFC 282 on Saturday live on DAZN, while those in the US can watch the event on ESPN+ PPV, click here for more information.