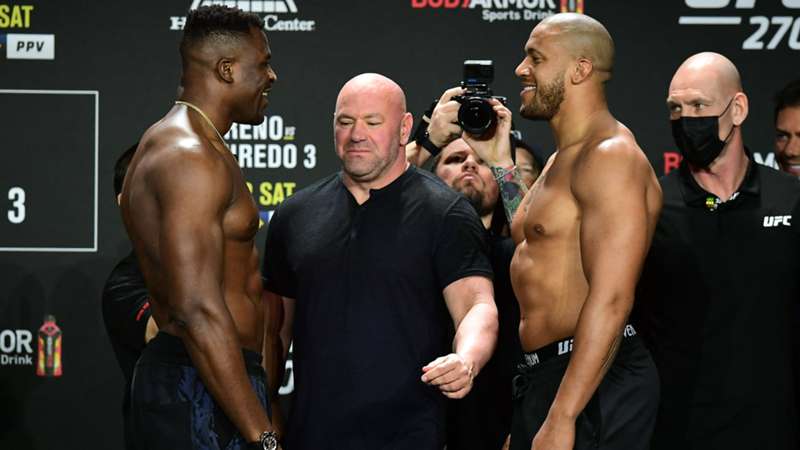 Francis Ngannou accomplished his goal when he violently finished Stipe Miocic at UFC 260 last March. The world looked to be Ngannou's oyster. He's the UFC version of Mike Tyson. Add in his story of getting to the UFC, and you have a megastar on your hands. Instead, Ngannou and the UFC have been at odds.

The UFC wanted Ngannou to fight Derrick Lewis at UFC 265 at the beginning of August. However, Ngannou had just gotten back from a trip to Africa, including his native Cameroon, and wanted a bit more time to prepare. The UFC didn't oblige with Ngannou's request and went on to book Lewis vs. Ciryl Gane for the interim title. That upset Ngannou as he felt disrespected because he just won the belt and deserved more time to bask in the accomplishment. Gane went on to beat Lewis via third-round TKO to win the interim title. The victory set up a title unification with Ngannou and will occur in the main event of UFC 270 on Saturday from the Honda Center in Anaheim, Calif.

Contract negotiations have hit a stalemate with mudslinging from UFC president Dana White and Ngannou and his team. Ngannou is on the final fight of his eight-fight contract. Should Ngannou take care of business at UFC 270, he would invoke the champion's clause under his deal. The clause keeps Ngannou under contract for either three fights or one year. Ngannou's made it clear he won't fight unless a new deal is struck and the chance to have a boxing match is included.

"I will not fight for $500,000 [or] $600,000 anymore," Ngannou recently told ESPN . "It's over. I took this fight for personal reasons because I want to make sure that regardless of [whether] it's fair, I can make my case that I have completed the fights."

"100 percent [I need to box]," Ngannou continued. "We've been having discussions for years. It seems like they are OK with it. Let's be honest, I do believe that whatever you are doing -- whatever the event is -- if the UFC is involved, it's just going to make it bigger. There is no question. So, yes, if I box, I would like the UFC to be on board."

Gane has taken the UFC by storm since entering the organization in August 2019. The Frenchman has dominated the competition, going 7-0, with four of those victories coming inside the distance.

Ngannou and Gane have a history with one another. They trained together for a short time at the MMA Factory in France. Ngannou left the gym after an acrimonious split in 2018, and there's been tension among the two ever since. It came to a head at UFC 268. Gane and his team were in the backstage area when Ngannou made his way into the arena. He walked past Gane without even taking a look at him.

Will Ngannou be able to block out all the outside noise? If so, can Gane take advantage? If not, does Gane have enough to beat the heavyweight champion?

Here is everything you need to know about UFC 270: Francis Ngannou vs. Ciryl Gane.

What channel/stream is UFC 270 tonight?

UFC 270: Ngannou vs. Gane will be broadcast on ESPN+ PPV in the US, while BT Sport has broadcasting rights in the UK.

This fight takes place at the Honda Center in Anaheim, Calif.