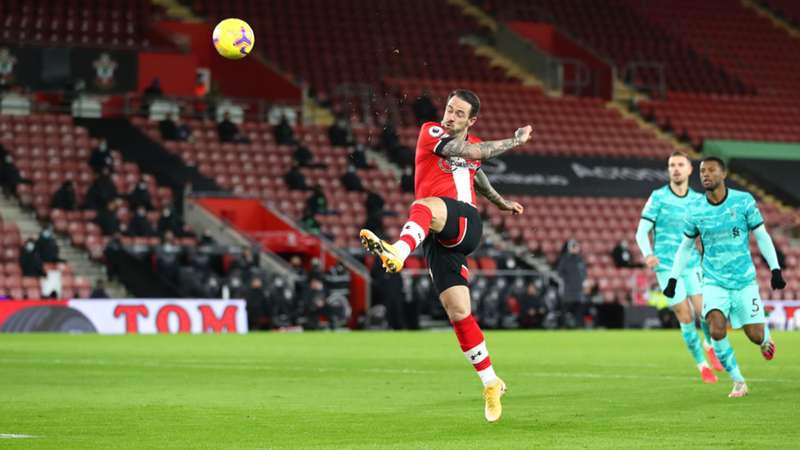 James Ward-Prowse's excellent free-kick delivery stumped a makeshift Reds back-line and gave Ings the opportunity to beat Alisson in the Liverpool goal with a delightful lob with less than two minutes on the clock.

For much of the game, it was the hosts who looked mostly likely to score the game's second and double their lead as Jurgen Klopp's often-free-scoring side failed to muster a shot on target for over three-quarters of the contest.

Sadio Mane, who signed for the 2019-20 league winners from Southampton, was instrumental in many of the visitors' best hopes of getting back into the game but could not find the shot or assist to beat Fraser Forster, back in the side following Alex McCarthy's positive COVID-19 result.

At the full-time whistle, Saints manager Ralph Hasenhüttl could not hide his emotions on the touchline after securing one of the biggest results of his managerial career.

Liverpool remain top of the table on goal difference, but can be overtaken by rivals Manchester United if they avoid defeat in their game in hand. Southampton, meanwhile, move back up to sixth albeit having played a game more than many of their competition for a European place.

You can re-live the major happenings of the match below.

facebook twitter whatsapp
Southampton hold on! Their goal via Danny Ings in only the second minute of the game is enough for the Saints to defeat the defending Premier League champions Liverpool 1-0!

facebook twitter whatsapp
Ex-Saint Mane, so involved in many of Liverpool's efforts but lacking the cutting edge to convert, heads a corner over the bar with seconds left in added time. That could be all she wrote...

facebook twitter whatsapp
Allison is forced out of his goalmouth as the hosts spring another counter on the increasingly-desperate hosts, and Valery nutmegs the keeper from outside the box, but the effort hasn't enough power on it to get all the way to the goal line and Liverpool defenders are able to get it away.

75' Liverpool finally get a shot at goal... saved

facebook twitter whatsapp
Mane finds space in the box but it's a very tame effort and easily gobbled up by Forster. It's going to take something extra for the visitors to break Saints down before this one is over.

69' Liverpool continue to knock on the door

facebook twitter whatsapp
...but for now, they're unable to find an equaliser. Not even a shot on target yet. Time is ticking. Saints are now set up to spring a counter if the chance arises, and they've attempted to do so once or twice.

facebook twitter whatsapp
Jack Stephens with a heroic block to deny Mane from close range, though Forster was also there too.

facebook twitter whatsapp
Couple late Liverpool half-chances as Salah heads over the bar shortly before a corner leads to a bit of defensive pinball, but the whistle goes and the hosts deservedly lead at the break.

38' Penalty claims... nothing given

facebook twitter whatsapp
Sane threads Salah through and he goes down under a Bertrand challenge, but the defender has won the ball there and it's a very quick VAR check before play resumes. 37 minutes gone in the first half.

facebook twitter whatsapp
It's been a decent game so far. Chances at both ends, and Southampton have come close to doubling their lead over the champions while Salah was denied in a one-on-one by Forster only for the flag to belatedly go up anyway.

facebook twitter whatsapp
Less than two minutes on the clock and we already have one hell of a narrative! Ward-Prowse's clever chipped free-kick bamboozles the Liverpool defence and finds former Red Danny Ings, who lobs the keeper with style.

How #SaintsFC will line-up for the first time in 2021: pic.twitter.com/gBJlxFEsPe

Three changes for the Reds, as @Thiago6, @Alex_OxChambo and @GWijnaldum come in to the starting XI 👊