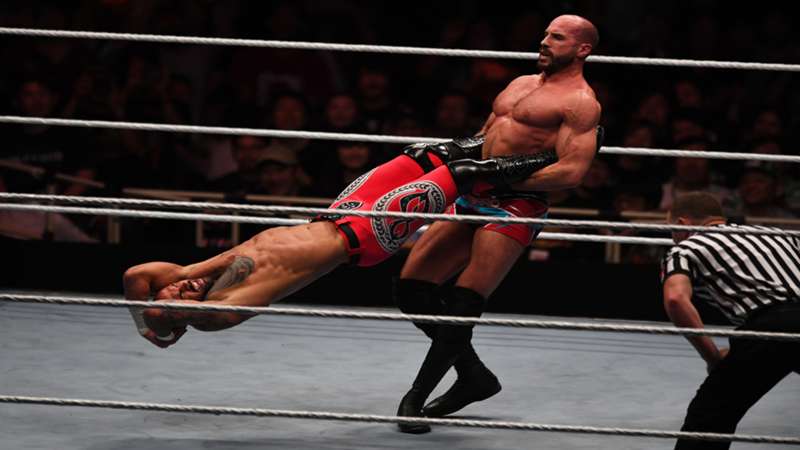 It's been a long road for Cesaro to finally get a Universal title match against Roman Reigns at Sunday's WrestleMania Backlash.

Without question, one of the best wrestlers in the world in the last 20 years has been Cesaro.

From his days toiling through Europe, and going to Ring of Honor and PWG, Cesaro accomplished his life long dream of being a WWE superstar when he signed with the company in 2011.

Cesaro possessed everything needed to be a top guy in WWE. He had the body, good looks, charisma and a great in-ring worker. While he's won the United States championship, Raw and SmackDown tag team champion, and the first-ever Andre the Giant Memorial Battle Royal, much to the chagrin of many wrestling fans, Cesaro's never been elevated to the main event scene.

That changed for the "Swiss Cyborg" in 2021 as on Sunday he will be challenging Roman Reigns for the Universal championship at WrestleMania Backlash.

Ahead of his monumental matchup, Cesaro talked with DAZN News about the sleepless nights he had about whether he'd ever get the chance to break through, if he ever thought leaving WWE or retiring because of that, the influence of John Cena and playing second fiddle to Paul Heyman.

DAZN: I've been a fan of you for such a long time, back to the Ring of Honor and PWG days. And everyone's like, 'Well, why isn't he getting his opportunity? Why do you feel it took so long to finally break through and get to this point where you are challenging Roman Reigns for the Universal title on Sunday at WrestleMania Backlash?

Cesaro: I spent many sleepless nights asking myself that question, to be honest. And, you know, I didn't really find the answer. It's just for certain people, it takes longer. I remember, when I first got to WWE after a year or two, somebody told me was like, 'You'll get there, it will just take a while. That's just your path'. You don't want to hear that when you just started. You don't want to hear it will take a while, and you just see other people just jumping the line or getting the opportunity, and you're just there working day in and day out. You don't really want to hear that. But then if you look back at it, you think like, 'Well, the journey was worth it because you took all those people that watched you over the past nine years, or like you even longer you took them on the journey with you'.

So when you finally arrive, and that journey is not over this Sunday, I tell you that much just starts with a nice shiny title belt. So if you take those people on that journey, it just means so much more. I feel when I talk about that I deliver all the time or working hard and dedicating myself to wrestling, it's not just, who's this new guy just saying that stuff? It's like, 'No, you've seen me for nine years and live by the words that I'm saying'. I feel like they all happen for a reason, and I've finally arrived where I want to be now. Looking back, I can say that I took the hard road. I did, and it means so much more.

DAZN: He said something interesting that caught my attention was when you guys got paired together after you won the Andre the Giant Memorial Battle Royal at WrestleMania 30. Paul doesn't go with anybody. You win the Battle Royal, and here comes the monster push. Then it didn't happen. I asked Paul, and he gave me an interesting answer. He felt like it wasn't the right time, and it just didn't click, and it wasn't the right time because they were coming off the stuff with Brock breaking The Undertaker's, and it felt like the destination was still going to be Brock and The Undertaker, and you were more of like the placeholder at the time. You feel that same assessment, and that just wasn't the right place, the right time, or do you feel like you guys were put together, and it's just you guys really just didn't click very well?

Cesaro: I'll say this much. I learned a whole lot from Paul, and I still do. But I agree 100 percent with Paul's assessment because that's 100 percent right. Paul used that opportunity to talk about Brock Lesnar and, I was second fiddle at that point. He even said that in the Talking Smack interview that he did. He said that he knows that alliance was more beneficial to him than it was for me. But you know what, despite that, I'm here today, challenging Roman Reigns on Sunday. I'm here despite not being picked, not being "The Guy" chosen by powers that be. I'm still here because of what I bring to the table. I feel that speaks for itself.

DAZN: As you said, you've had a lot of sleepless nights, and you're talking about what you said right now. Did it ever get to the point where you had the thought of going somewhere else, or maybe the idea of retiring? Did any of those thoughts during those sleepless nights and the frustration that those thoughts ever crept up in your mind?

Cesaro: I'll be lying if I say they didn't. But I'm a very stubborn individual, and I have my goals. There's a former WWE superstar who famously kept saying never give up. I would call him a friend. I'm very lucky to be able to call him a friend. (Blares John Cena ringtone)

DAZN: Now you're going to get heat because you called John a former WWE superstar.

Cesaro: He's still a WWE superstar. I didn't say he's retired. Right now, he's not with the WWE. That's John's catchphrase. But it is really true that you should never give up. Many people say it in different forums. There's many different things that are in my head that I live by and that I mold my life by. It's not, 'No, you, you cannot. Don't let this bring you down. Tomorrow's a new day. You'll just be better. You keep grinding and keep getting better, and eventually, hard work will pay off'.

I firmly believe in that. I have to believe in that. To me, this Sunday is a combination of all of that. I feel people look at WWE superstars as role models and as these larger-than-life individuals. If anybody tells you they never have doubts, they never questioned themselves. They're just lying because I feel we all do, or at least I can just speak for myself. I'm human. At the end of the day, you want to overcome. You want to be the best version of yourself. Every single time I step in the ring, that's what I can control because as we saw last year, there's a lot of stuff in our lives that's out of our control. If we focus on that, it can drive you crazy. But if you just focus on what you can control and make it the best as you can, life is great.

DAZN: Someone that has been there for you a lot of your career is Daniel Bryan. It was revealed his contract expired after losing the match to Roman Reigns on SmackDown. He'd been a big advocate for you because he seen something in you. He knows that you can be one of the top guys in the company. What does it mean when you have someone like that is fighting for you, advocating for you saying, 'This is the guy, give him the opportunity', because he sees 'it' in you?

Cesaro: That means the world to me. I also know that you don't get an endorsement like that just from nothing because I've known Bryan for so long. I've known him for almost 18, 20 years. We've gone through a very similar journey. For him to do that, that just meant the world to me because it just shows, like we talked about, you get frustrated, and you want to have quick success. You want to have the overnight success that is never really overnight. But you don't let that weigh you down. You keep working hard. You keep having a positive attitude. That's how you impact and interact with different people along the road. If you're just all negative, and just to be like, 'Screw it, I'll just do whatever'. That's not a good mindset. That's not how you get people to advocate for you or to speak up for you down the road because they see that no matter what, no matter how hard life hits you, you just keep getting up, keep fighting, keep doing your best you, and perform every single time no matter what. I think that's very important. That just shows that your body of work is appreciated and that everything you do actually matters. I'm very lucky to be able to call Daniel a friend.

Cesaro: It will mean the world to me. I feel I represent so many people. I'm a kid from Switzerland that wanted to be a WWE superstar. That's unheard of. My friends were like, 'Are you are you crazy'? To reach that mountain top to win that Universal championship, it will just mean so much to me and make all the pain and sacrifice worth it.