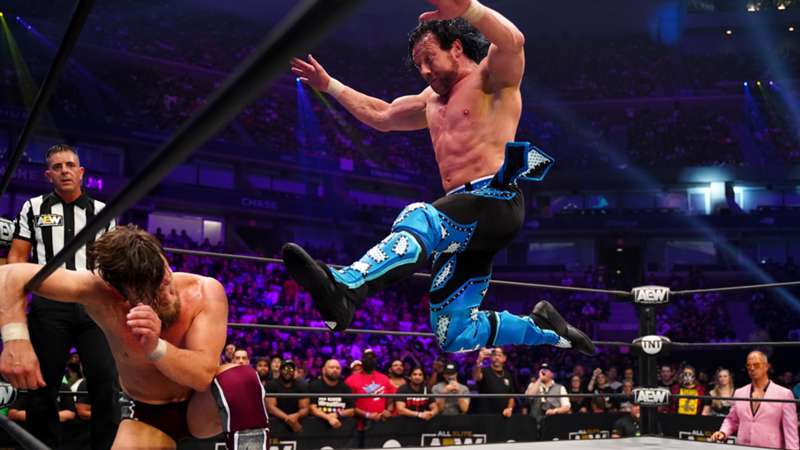 AEW
Check for Usyk-Joshua 2 on DAZN in your country

All the signs suggest the answer is an emphatic "yes."

Kenny Omega, former All Elite Wrestling world champion and one of the company's biggest stars, has been out of action since losing his championship to 'Hangman' Adam Page in November 2021.

Omega, 38, took some extended time off in order to heal some long-standing injuries, but many fans expected his hiatus to have concluded by now. It appeared that his physical condition required more time than many assumed.

However, on-screen developments both on AEW television and on popular YouTube supplement show Being The Elite have been hinting that 'The Cleaner' is on his way back to action.

Will it happen as soon as tonight, on the August 17 edition of Dynamite?

There appears to be enough evidence to suggest that the answer is: yes!

Omega walked away from storylines on the Dynamite immediately after his emotional title loss to former friend Page at the Full Gear PPV, trusting close friends The Young Bucks and reunited on-off ally Adam Cole to steer the ship of their stable 'The Elite' while the Canadian, seemingly at peace with Page's redemption at his expense, began his self-imposed hiatus.

While Omega has been off the screen, Cole introduced his old teammates from WWE NXT group The Undisputed Era, Kyle O'Reilly and Bobby Fish, to AEW and convinced The Bucks to form a merged five-man unit called The Undisputed Elite.

However when The Bucks began to reconcile with Hangman and leaned towards asking Page to team with them in the upcoming tournament to crown the first ever AEW Trios champions, Cole pointed out that the trio should have been The Young Bucks and Fish, with Cole and O'Reilly both on the injury list themselves.

He then shockingly gave Kyle and Bobby the order to attack The Bucks, admitting to them that he still desired revenge for when they and Omega kicked him out of The Elite five years ago, and intending to seriously injure Matt and Nick Jackson until Hangman himself came to the rescue.

The appreciative brothers apologised to Page for the entire two-year saga that led to their friendship dissolving, before formally asking him to be their trios partner. But while Page did seem happy to mend fences, he politely declined the offer in favour of instead serving as cornerman for The Dark Order, a team also entered in the tournament who helped Hangman throughout the whole ordeal with The Elite.

How would Kenny Omega return tonight?

It's extremely likely that Omega will end up being Nick and Matt's partner, currently listed as an unknown entity in their quarter-final bracket against La Faccion Ingobernable (Andrade El Idolo, Rush and Dragon Lee) for tonight's Dynamite.

If that happens, and the original edition of The Elite advance, there's a chance they could face The Dark Order, with Hangman in their corner, at the All Out PPV in Chicago on Sept. 4.

So, do we know it will definitely be Omega?

AEW have not officially announced that it's definitely him. But, unofficially, it's all but guaranteed.

Monday's edition of Being The Elite replayed the Dynamite segment featuring Hangman's rejection of The Bucks' offer, before concluding with an extremely heavy hint that Kenny would step up to the task.

In addition, the entire episode was littered with very clever 'Easter Egg' hints, such as Matt Jackson's choice of t-shirt, a half-eaten pizza cleverly shaped like Omega's 'One Winged Angel' motif, and a second or so of Omega's entrance music right at the very end of the episode.

Are the Kenny Omega hints a red herring?

AEW adopted a similar 'worst kept secret' strategy while escalating the hints week after week before CM Punk's return to wrestling about a year ago.

The strategy was hugely successful; giving the fans what they wanted was the popular choice, and teasing it instead of confirming it in advance kept people excited all the way to his return.

Surprises for the sake of surprises often fall flat in the long run in wrestling, and in this particular instance there is no 'swerve' choice of partner instead of Omega that could possibly be seen as an improvement on the star's return.

Anticipation of a first in-ring Omega appearance in nine months is now extremely high, and going any other direction after all the storytelling and hints for the sake of a 'swerve' would leave a bad taste in many viewers' mouths.