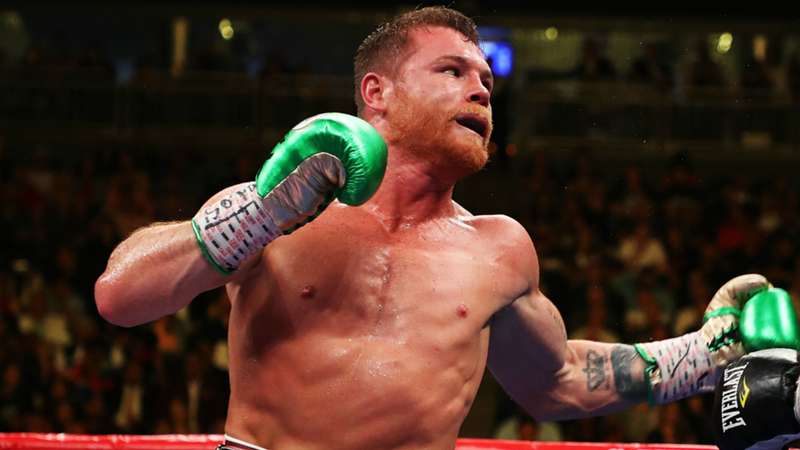 From his scintillating knockout of Sergey Kovalev to beating rival Gennadiy Golovkin and more, the face of boxing has produced spectacular performances.

Saul "Canelo" Alvarez seemingly flashes an improved skillset with every bout. He walked rival Gennadiy Golovkin down in a revamped rematch strategy, before showing cat-like reflexes on the defensive end against Daniel Jacobs and then incredible poise, patience and pounce in his thrilling knockout of Sergey Kovalev.

With feats like that, it's no wonder Canelo is the face of boxing with the 53-1-2 (36 KOs) record to boot. Here, DAZN News looks back at Canelo Alvarez's five best fights.

Canelo and Kovalev had boxed each other pretty evenly through 10 rounds and then ... BAM! Alvarez launched a left hook that crashed across Kovalev's jaw and badly wobbled the Russian fighter. Sensing that he had Kovalev hurt, Alvarez came back with a right hook that dropped Kovalev to his knee for the instant, emphatic knockout in the 11th round. Just like that, the Mexican boxing sensation won the WBO light heavyweight title and became a four-division world champion in front of a packed MGM Grand Garden Arena in Las Vegas.

Why should Canelo's unanimous decision (116-112, 115-113, 115-113) over Jacobs be considered one of the Mexican boxer's five best performances? Simple — not only was Canelo the aggressor, but the unified world middleweight champion showed a next level of defensive wizardry, as he frustrated "The Mircale Man" by nimbly eluding his punches with excellent head and body movement. Coming off back-to-back wars against Gennadiy Golovkin and an evisceration of Rocky Fielding, Canelo showed levels of improvement, especially with his defense, in delivering his sound, dominant victory.

Canelo heard all the talk about Gennadiy Golovkin getting robbed on the scorecards in their first fight, which was controversially ruled a split draw back in September 2017. And Canelo had an axe to grind about it. He did away with his counterpunch mentality and walked GGG down for many rounds, bringing the fight to the Kazakh warrior.

Although Golovkin connected on 234 of 879 punches to Alvarez's 202 of 622, it was Canelo who believed that he landed the more impactful, significant shots in the rematch. And judges agreed by scoring it as a majority decision in his favor (114-114, 115-113 and 115-113). Once again, GGG thought he should have been the winner, and many boxing pundits and fans were split on the result. But there's no doubting that Canelo's strategy change paid off and at the very least, he arguably did enough to defeat Golovkin this time around.

Canelo had gained invaluable experience in his only pro loss — a majority decision defeat to Floyd Mayweather Jr. in September 2013. And he got to apply some of that experience against another battle-tested veteran in Miguel Cotto, as the two reignited the Mexican-Puerto Rican boxing rivalry.

Although Cotto was 35 to Canelo's 25, he possessed enough veteran savvy to possibly make this a dangerous matchup for the young lion. That, and the fact that Canelo was vying for Cotto's lineal and The Ring middleweight titles, in addition to the then-vacant WBC strap, made it all the more intriguing. The Mexican boxer made sure he didn't have any hiccups this time around, as he soundly defeated Cotto to become a two-division world champion. His third-division world title came in December 2018, when he blasted Fielding via third-round TKO for the WBA (Regular) super middleweight strap.

By this point, Khan's chin was already in question, as he had suffered a fourth-round TKO to Danny Garcia back in July 2012. However, the British boxer rattled off five straight victories to haul some healthy intrigue into his mega bout against Canelo. And for whatever it's worth, Khan was peppering Canelo with the jab and outboxing the Mexican star early on ... or so it seemed.

All of Khan's early output and brilliance came to ghastly end in the sixth round, when Canelo connected on a hellish right hand that instantly knocked the British boxer out. As scintillating as Canelo's KO of Kovalev was, this one was even more devastating and perhaps remains Alvarez's best knockout.