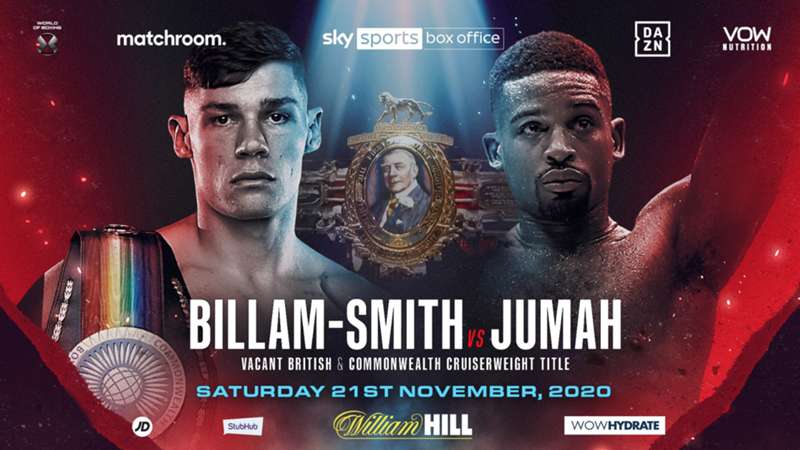 The contest for the vacant British cruiserweight title is fight number three on the Nov. 21 card.

Chris Billam-Smith will square off with Deion Jumah for the vacant British cruiserweight championship on the undercard of Alexander Povetkin's huge rematch with Dillian Whyte on Saturday, November 21.

Billam Smith (11-1, 10 KOs) was in action during Matchroom's Fight Camp series in August, stopping Nathan Thorley in the second round. He hopes to add the British belt to the Commonwealth title he successfully defended against Thorley.

"I think it's a great fight," said Bilam-Smith. "Me and Dion have shared the ring together in the amateurs and we have sparred as professionals. I think our styles gel really nicely. We both come to fight and we are both always fit. We're two big punchers so it's a brilliant fight and one that I'm really excited about.

"He beat me in the amateurs so I'm looking forward to getting me revenge. The British title is such a prestigious belt and it is a dream for any British fighter to fight for it. I'm absolutely buzzing to add that belt to my Commonwealth. I will become the British champion on November 21."

English champion Jumah (13-0, 7 KOs), meanwhile, is hopeful of adding a new title belt of his own and remaining undefeated in the process.

'The Ghost,' a 6' 1" southpaw from Chelsea, kicked off 2020 in style as he outpointed Sam Hyde over 12 rounds to retain his English title, and secure a shot at the famous Lord Lonsdale Challenge Belt previously owned by Richard Riakporhe.

"We have waited too long for an opportunity like this but timing is everything and I’m glad this fight got made when it did," said Jumah.

"Chris Billam-Smith is the perfect opponent for this stage in my career. On November 21 I will be walking away with both the British and Commonwealth titles. The Ghost is coming!"

Billam-Smith vs. Jumah is the third fight confirmed for the Nov. 21 card so far.

In the main event, Dillian Whyte attempts to revive his world championship aspirations in a rematch with Alexander Povetkin after the Russian's stunning fifth-round uppercut KO at Fight Camp. Also set for the show is Conor Benn's return to the ring as the unbeaten Brit tests himself against Germany's Sebastian Formella.