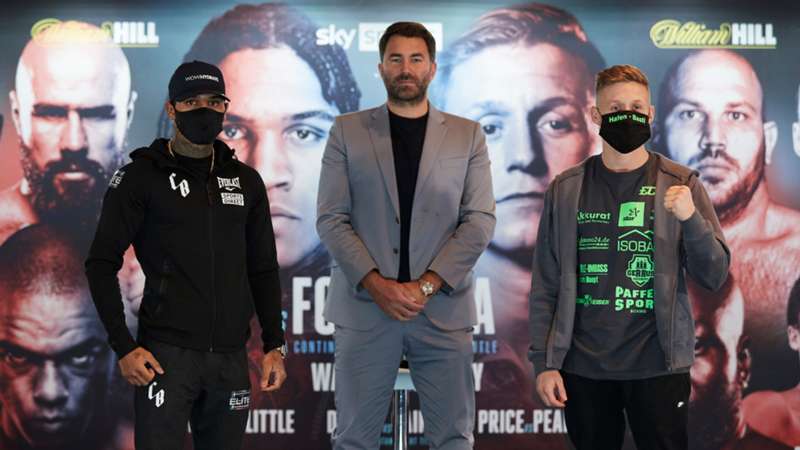 After losing a host of planned fights over the last few weeks, Matchroom Boxing's Nov. 21 card goes ahead with a welterweight main event and two intriguing heavyweight scraps.

Conor Benn (16-0, 11 KOs) and Sebastian Formella (22-1, 10 KOs) both made weight for their WBA continental welterweight main event at the SSE Arena, Wembley on Saturday.

Benn, who looks to take a big leap in his career progression and make up for over a year of lost time due to injuries and the COVID-19 pandemic, hit the scales at 146 3/4lb, cozily inside the divisional limit of 147 lb.

Germany’s Formella, meanwhile, who has managed to keep active in 2020 and last fought in a decision defeat to former IBF champion Shawn Porter in August, was a shade heavier at 146.8 lb.

Both fighters have a good reputation for reliably making welterweight, and the title fight is on for Saturday in what will be the 24-year-old Londoner’s first main event appearance.

The Nov. 21 card was initially announced with a headline attraction of Dillian Whyte vs. Alexander Povetkin in a rematch from Matchroom Fight Camp in August.

However the Russian, who surprised everybody when he pulled himself off the canvas twice before knocking the in-control Whyte out in Round Five, tested positive for the coronavirus and the fight will likely take place in early 2021 instead.

Benn, son of legendary super-middleweight “Dark Destroyer” Nigel Benn, has proven himself to be worthy of the hype in his most recent bouts but victory over a seasoned and well-traveled contender such as Formella in their 10-round fight is a must if he is to reach the next level.

Babic (5-0, 5 KOs) — who launched a verbal attack at Little during Thursday’s press conference for “disrespecting” him by praising Babic’s fellow Croatian heavyweight and heated rival Filip Hrgovic  — gave a reading of 213 1/2lb.

“The Savage” had weighed in for his two previous fights in the “bubble” against Shawndell Winters and Niall Kennedy beneath the cruiserweight limit, which led to live stream hosts Chris Lloyd and Darren Barker strongly doubting that the scales were working properly in the past.

“Gyppopotamus” Little (10-8, 3 KOs), meanwhile, has lost a lot of his excess weight ahead of this bout and came in at 234 3/4lb for what could be a very brief fight but is scheduled to go eight rounds.

Ben Ridings (3-0, 0 KOs) and Jez Smith (11-2-1, 5 KOs) answered Eddie Hearn’s call to add another bout to the card at the last minute when a host of planned undercard contests for the likes of Chris Billam-Smith and Hopey Price fell through.

Their middleweight six-rounder will take place at a previously-agreed catchweight of 166 lb, six pounds above the usual middleweight ceiling of 160 lb. And both men made that catchweight, with Smith at 165 3/4lb and Ridings at 164 3/4lb.

Opening the festivities will be the 10-round fight for the vacant English bantamweight title, and both Liam Davies (7-0, 2 KOs) and Sean Cairns (7-2, 1 KO) made championship weight at 117 3/4lb apiece, neatly under the 118 lb limit.