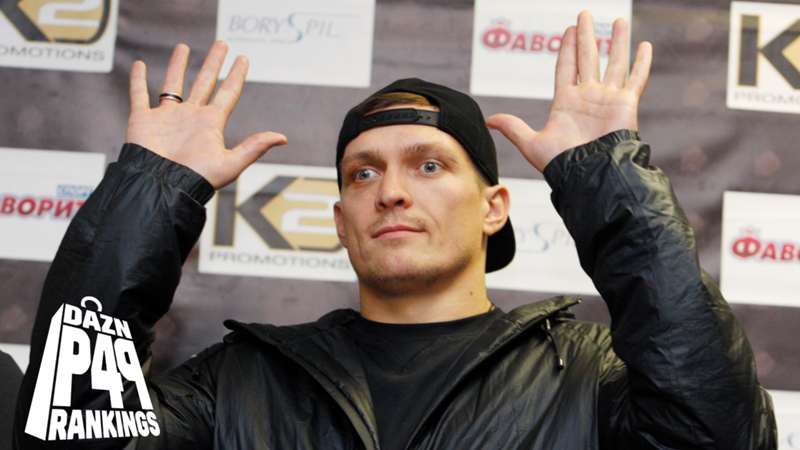 But who exactly are the very best in the sport, regardless of division?

After flat-out dominating the entire cruiserweight field to become undisputed world champion, Usyk required just a few pro bouts at heavyweight before outclassing and dethroning former P4P top-10 resident Anthony Joshua for most of the heavyweight division's belts. Joshua upped his game in the Saudi Arabia rematch, but Usyk found yet another gear to finish his first successful defence in even more style than his crowning moment. All of this despite stepping away briefly to serve his country. Usyk is THE man in professional boxing right now.

The margin between Crawford and Usyk is so slender, they both rose above Canelo in the wake of Alvarez's loss to Bivol. Everyone was waiting for an undisputed clash with Errol Spence Jr., but instead he will fight David Avenasyan. A win will prove nothing but a defeat will cost him his ranking.

Expected to be given another stern test by Nonito Donaire in June, Inoue made a mockery of pre-fight predictions as he became the bantamweight ruler with an emphatic second-round knockout of the legendary Filipino. The stunning performance moves Inoue into the top three at the expense of Canelo Alvarez.

Canelo's brilliant eight-and-a-half-year win streak and achievements and the fact his recent defeat at Dmitry Bivol's own weight class mean it's hard to push him down the list too far. Canelo returned to winning ways in September by defeating his great rival, Gennadiy Golovkin, but the points victory is not enough to move him back into the top three.

After entering the list earlier this year with a dominant win over Canelo Alvarez, Dmitry Bivol moves up a spot thanks to outlclassing a top rival at 175lbs in Gilberto Ramirez. Bivol is undoubtedly one of the fighters of 2022 and the potential to climb these rankings next year is huge if he can get past Artur Beterbiev.

Speaking of doing everything asked of them, 'Cool Boy Steph' enjoyed a superb 2021, earning his first world title in January 2021 by beating Angelo Leo for the WBO super-bantamweight title before unifying that with Brandon Figueroa's WBC title in November. 2022 is following a similar path, with Fulton dominating Daniel Roman to move up one spot.

Traveling to Australia to face George Kambosos Jr. for every belt at 135lbs, Haney produced a one-sided masterclass that saw him silence the home crowd in Melbourne. And then he did it all over again. But, with every belt now his property, can Haney move further up the list with wins over other top-class lightweight contenders?

It was inevitable that Stevenson would one day enter boxing's P4P rankings. The Newark fighter has confirmed his place with a dominant win over Oscar Valdez to become the unified champion at super-featherweight. At 24, Stevenson is already a two-weight world champion, and he's fully expected to be a regular fixture in these rankings. But after failing to make weight in his last fight, lightweight offers him a new challenge.

Following his rematch win over Brian Castano, Charlo cracked the list at 10. His stoppage win over the rugged Argentine confirmed his status as the world's best light-middleweight, and his body of work before the Castano series means that Charlo is worthy of inclusion.

Tyson Fury was part of the top 10 before he announced his retirement after defeating Dillian Whyte. While the heavyweight might still be at the top of his game, we can't be sure, yet. December's clash with Derek Chisora confirmed that the retirement has been overturned, but Fury went into the fight as the heavy favourite and nothing suggested he was tested over the 10 rounds Chisora stayed in the fight for. A fight againt Oleksandr Usyk, Joe Joyce or Anthony Joshua would give him the chance to crash back into the rankings. Gervonta Davis and Vasiliy Lomachenko are two fighters close to being included, but match-ups against Ryan Garcia and Devin Haney, respectively, could see them earn a place. The same applies to lower-weight contender Juan Francisco Estrada, who is close to the 10.  Terence Crawford's failure to organise a fight with Errol Spence Jr. could cost him in the near future.