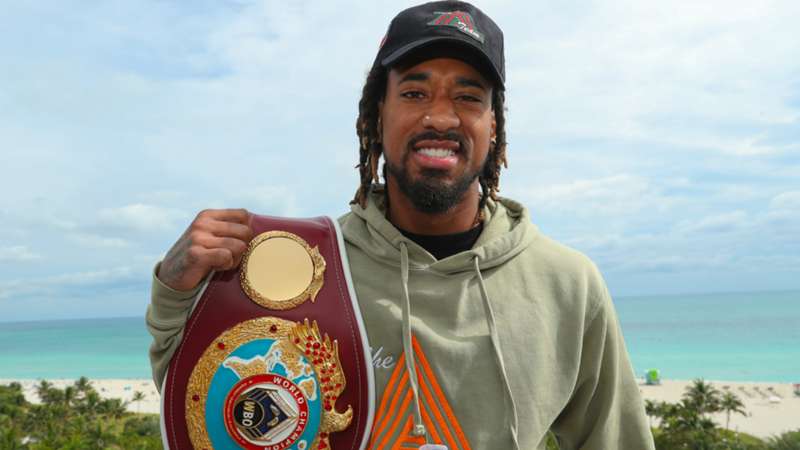 Demetrius Andrade says he is ready to take on the best boxing has to offer, as soon as any of them will actually sign up to face him.

Demetrius Andrade continued his long-running beef with Billy Joe Saunders ahead of the Brit's defense of his WBO super-middleweight title against Martin Murray on Friday, daring Saunders to step into the ring with him in February.

They had the opportunity to run it back in 2019 when Saunders was recognized as the mandatory challenger for Andrade's WBO middleweight strap, but Saunders instead opted to move up to super-middle, citing the poor financial offer as what motivated him to pass on the title fight.

Saunders has recently criticized Andrade's style and list of defeated opponents, while other big fights such as Saul "Canelo" Alvarez and Gennadiy Golovkin continue to prove elusive for "Boo Boo."

But speaking on the Ak and Barak Show (on DAZN and Sirius XM Fight Nation), Andrade pointed out the hypocrisy of top fighters saying Andrade needs to defeat better opponents before they will fight him, thus preventing Andrade from ever doing exactly that.

"I was willing to fight Billy Joe Saunders back then and I’d fight him now at 168," said Andrade. "I know I haven’t fought the best yet, but I will. If I’m not good enough, why don’t Canelo, Saunders and GGG come and whoop my ass and send me on my way?

"My situation is tough. I’d love to fight Triple G. If I could fight him, I will do it. If I could fight Saunders, I will. Now’s the time, with COVID, to put on these fights. People wanna see the best fights right now because they can’t attend.

"I’ve just got to keep beating whoever they put in front of me. I’m fighting tough guys. They’re not the biggest mainstream names, but they’re guys that the hardcore boxing fans know are tough opponents. I’m up for the challenge. Not a lot of boxers wanna do that, they want the easy fights.

Given Saunders' comments, in which he claimed Andrade looks good for four rounds but then fades, he of course was in Andrade's crosshairs more than others — especially considering their history of "almost" moments.

Andrade sent the following message direct to Saunders: "If I’m not a tough fight, then sign the contract for February and you’ll see for yourself!

"I could say the same thing, Saunders you look like s— for the first four rounds or the last four rounds. This is what they say. I don’t wanna fight him because he’s off-balance, because he’s boring… these guys do the same s— then say I only look good for four rounds. Come and bring it, bring the pressure!

"He talks about me but he’s over there fighting Martin Murray who is almost 40 years old. February, me and Billy Joe at 168. That’s what we need to do. Him or Triple G. I won’t even have a tune-up fight and I’ll jump into the ring with these guys.

"I don’t fear losing. Pacquiao is a great example. Canelo did it after losing to Mayweather. If you have what it takes, losing isn’t everything.

"I would say they’re scared to get in the ring with me because they know it’s a tough fight. I’m not a pushover and I’m gonna make things difficult. At the end of the day though, this is what we signed up for. Don’t blame me because I work hard, I’m athletic because I have all these skills and my talent and IQ take me to another level. That’s bulls—-.

When moving up to 168 lb, Saunders remarked that the super-middleweight aces were all far more willing to do battle with one another, compared to 160 lb.

Andrade wants the super-middleweights to prove that in 2021, with himself involving in the mix. In the meantime, however, the American believes the real fearless action can be found elsewhere.

"The welterweight division is where they are all warriors," he continued. "They got heart. They all fight each other. They don’t care about an ‘0’.

"May the best man win between Errol Spence and Danny Garcia. I think that’s a good fight for boxing.

"I would move to 168 to fight Charlo and Triple G and the other top guys. I shouldn’t have to move to 168 and say that I’m not going back to 160, but for those fights, I don’t think it matters what weight they happen at. I’m willing to go in there and fight these guys, that’s it."

Saunders vs. Murray takes place on Dec. 4, live on Sky Sports in the U.K. and most countries globally via DAZN.