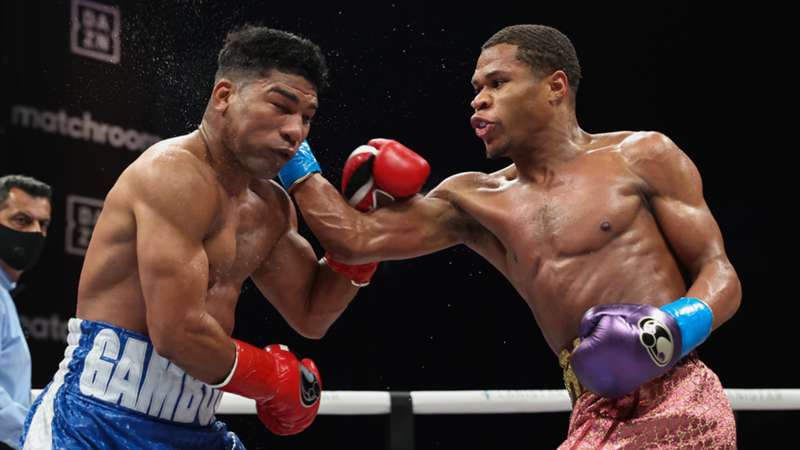 Easy work for "The Dream," as he defended his WBC lightweight title Saturday night, before expressing interest in fighting unified lightweight champ Teofimo Lopez Jr. next.

Devin Haney didn't produce the sensational highlight and statement that he was looking for.

However, "The Dream" thoroughly dominated Yuriorkis Gamboa to cruise to a unanimous decision and defend his WBC lightweight title Saturday night. Judges at the Hard Rock Live at the Seminole Hard Rock Hotel & Casino in Hollywood, Florida, had it 120-107, 120-107 and 118-109 all in favor of Haney, who flexed superior boxing skills on Gamboa in the near shutout.

"I thought I put in a world-class performance," Haney told DAZN's Chris Mannix following his title defense, which improved his record to 25-0 with 15 KOs. "Of course, I wanted the knockout, but he was a crafty veteran, he was doing a lot of holding, trying to survive."

Days shy of turning just 22, Haney immediately set the tone against Gamboa by asserting his jab and alternating its placement between the body and head. That early strategy led to Haney opening up his offense and letting loose with big right hooks that blasted Gamboa across the jaw over several sequences in the fight. Those power shots paved the way for Gamboa to resort to holding and going into survival mode. Haney unleashed three- and four-punch power combinations looking for a knockout in the 10th round to the point where Gamboa excessively held the champion in the 11th and was penalized a point by the ref for it.

Haney tried to once again hunt for the KO in the 12th, but time ran out. He didn't get the knockout highlight like Gervonta Davis did last week against Leo Santa Cruz or against Gamboa last December, but Haney did deliver a boxing clinic that should set up higher stakes.

"I showed that I'm here and I'm not going anywhere," Haney continued saying after the fight. "Fighting someone like Gamboa was a stepping stone, but I'm here for the big fights. I want to make the biggest fights happen to bring the best out of me."

He added: "There's a lot of big fights in the lightweight division. Teofimo Lopez is the one with the rest of the belts, so that's the main fight that I want to make happen."

A Lopez-Haney bout would have undisputed lightweight glory on the line.

Here's how the entire Haney vs. Gamboa main card went.

Zhang delivers a right hook followed by a thudding, straight left hand to knock Vargas out. A game Vargas tried to get up, but claimed he injured his knee on the way down and that was it. The "Big Bang" improves to 22-0 with 17 KOs.

Zhang really put all his power behind that straight left hand.

At 37, Zhang will need to land marquee fights soon to have a chance to make a true dent in the heavyweight division.

Heavyweights Zhilei Zhang and Devin Vargas will take the ring next

facebook twitter whatsapp
Zhang stands at a towering 6-6 and is a southpaw, making him all the more interesting. The 37-year-old Chinese boxer, who goes by the nickname "Big Bang," fought and lost to Anthony Joshua in the Olympics and is trying to claw his way up into a rematch with the unified world heavyweight champion.

It only took Arthur Biyarslanov 59 seconds

facebook twitter whatsapp
Arthur Biyarslanov bangs away at Juan Jose Martinez' body and drops him with an overhand right on the temple. Martinez gets up, but doesn't want to continue. This one is over!

facebook twitter whatsapp
Mati launches a vicious left uppercut, which splits Mojica's guard and drops him with a thud. Mojica tried to beat the count but told the ref he couldn't continue. Mati gets the second-round TKO and is still undefeated.

Mati quickly drops Mojica with a left in the first round

facebook twitter whatsapp
Mojica survives the frame. Let's see if Mati can increase the pressure during the second.

Reshat Mati vs. Marcos Mojica in a welterweight tilt is next

Raymond Ford calls out Ryan Garcia's brother for a fight

Ford drops Reyes again with a clobbering left hand. He then poured it on with more ammunition, including a piercing uppercut until the ref stepped in and ended it for the third-round TKO.

Ford has sparred with Teofimo Lopez and will look to continue gaining rich experience as he improves as a pro.

facebook twitter whatsapp
Ford didn't waste time showing off his boxing skills, as he deposited Reyes onto the canvas with a sharp, stinging left hand in the first round for a quick 10-8 frame.

facebook twitter whatsapp
The undefeated 21-year-old Raymond "Savage" Ford is a prospect to keep an eye on.

facebook twitter whatsapp
Keep it locked right here tonight for all the live updates, results and highlights from the Haney-Gamboa card.