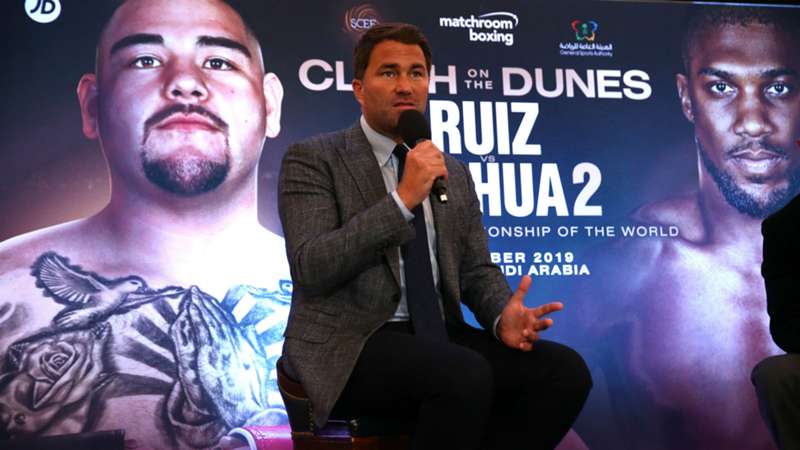 Now that Tyson Fury appears to have given up on attempts to squeeze in another fight before 2020 ends, Anthony Joshua's promoter believes the unification megafight may as well be next.

Eddie Hearn admitted that Anthony Joshua is keeping Tyson Fury out of his mind as he prepares to defend the WBA, WBO and IBF heavyweight titles against Kubrat Pulev on Dec. 12 — but the Matchroom Boxing chief believes the WBC champion may as well make Joshua his immediate priority.

For a long time, it appeared both Joshua and Fury would defend their respective straps on separate dates in December, each breaking their COVID-19 pandemic-enforced absence from the ring and getting in one more test before moving on to a collision course with one another in 2021, in a megafight that could potentially unify the entire division.

However, while Joshua's mandatory against Bulgaria's Pulev is all set, Fury was unable to find a satisfactory date to complete the trilogy with Deontay Wilder, the man he dethroned for the WBC crown in February.

At one point, it appeared a fight between Fury and Agit Kabayel was almost a done deal. However, that too fell through and Fury has been quoted as giving up on fighting again this year.

In an interview with Sky Sports this week, Hearn explained that if Fury isn't going to compete close to when Joshua does against Pulev, he expects him to simply wait until they can all focus on the unification clash.

"Listen, it's completely over to them," he said. "We have the dynamics of the deal in place.

"I don't want to hear [from] Fury: 'No, I'm thinking about fighting in March or April.' Why? Just go straight into the AJ fight. It's going to be the same timeframe.

"Listen, Fury doesn't want to take a small fight. They couldn't even get the money together to give him a fight in December, so let's give him plenty of money. Let's give him the biggest fight.

Hearn did add, however, that Joshua himself simply cannot think about the Fury fight until after he gets past Pulev, whose only prior defeat was in his only other challenge for world heavyweight gold against Wladimir Klitschko in 2014.

"Before you know it in this game, especially in that division, everything can tip on its head. It did do against Ruiz Jr. He was still focused on Ruiz Jr, but everyone was thinking about the bigger picture. Not one person in the camp is talking about Fury."

If Joshua does indeed retain his titles against Pulev, it does appear that news on the big bout with Fury could be confirmed sooner rather than later.

Both sides agreed to the financial details of a two-fight contract earlier this year, but the Pulev fight on Dec. 12 remains the final obstacle before concrete talks can begin on every other facet of the bout.

"I just know that if he deals with Pulev, the only fight, the only job that I've got is to make that fight with Fury immediately," said Hearn.

"He wants that fight badly, but he also knows he's fighting one of the best heavyweights in the world against Pulev. Great amateur experience, only one defeat as a pro against Wladimir Klitschko. He's beaten people consistently over the years.

"He's dangerous, he's tough, he's durable, but honestly from what I've been seen from Anthony Joshua, I really believe you're going to get one hell of a performance on December 12."

Joshua vs. Pulev airs live Saturday, Dec. 12 on Sky Sports Box Office in the U.K. and on DAZN everywhere else with a DAZN subscription.