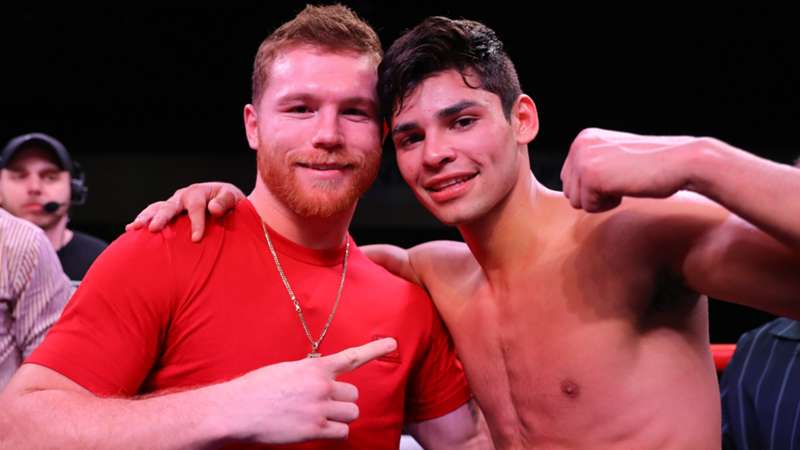 The Matchroom promoter was speaking on The DAZN Boxing Show.

Eddie Hearn believes he knows what is at the heart of the dispute between Ryan Garcia and Canelo Alvarez.

Garcia left Eddy Reynoso’s gym to return to Joe Goossen and has since beaten Emmanuel Tagoe ahead of a fight with Javier Fortuna, live on DAZN on July 16.

Speaking on Monday's edition of The DAZN Boxing Show, Hearn thinks Canelo and Garcia are at odds over the native of California's exit from the famous gym.

“I don’t mind any of it,” Hearn said of the two fighters he has a professional relationship with. “I think everyone says things that upset people in boxing.

"There’s a lot of pride, a lot of machismo, a lot of egos outside of the fighters. There’s clearly a feeling from either Ryan Garcia or whoever that things weren’t probably left on the best of terms.

“I know that Canelo and Eddy always felt that Ryan didn't put the work in that a slot in that gym should behold. The thing you have to understand about Eddy Reynoso’s gym: It's not easy to get in there and get the time of Eddy Reynoso, and it kind of comes with the blessing of Canelo Alvarez as well because those guys are so close.”

Hearn thinks that Canelo feels no reason to hold back on the subject.

“What I’ve learned about Canelo is he really wants to help people, and I feel like he would have helped Ryan," Hearn said. "He would have been around in training sessions, and I think they felt he didn't put the time back in. He had his own problems, and now there’s various back and forths.

“Ryan keeps putting a few digs in, and which Canelo Alvarez is going to respond to because again, another thing with Canelo Alvarez is he doesn't really care what he says. He’s just going to tell you what he’s feeling. You have to respect that. We’ve seen it in the GGG press conferences.”

You can watch the entire exclusive Eddie Hearn interview, which includes his thoughts on Claressa Shields vs. Savannah Marshall, who his top-10 all-time heavyweights are, Derek Chisora vs. Kubrat Pulev 2 and more, this week on The DAZN Boxing Show, which lands every weekday on the DAZN app for subscribers. For more information and to sign up, click here.