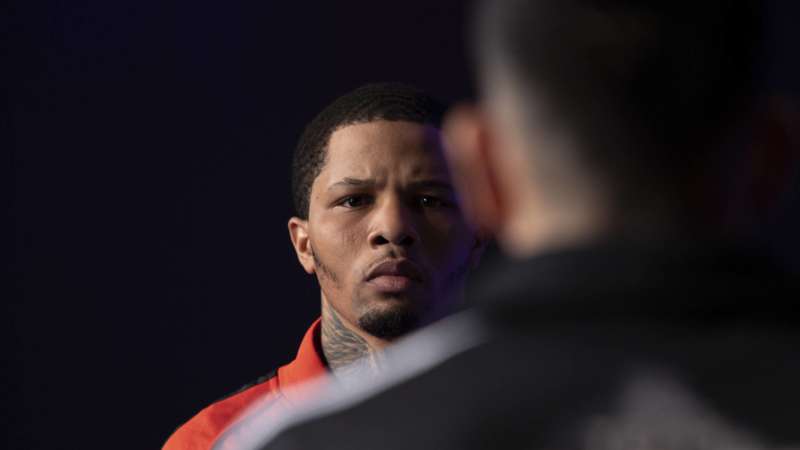 A win over Leo Santa Cruz in his pay-per-view debut Saturday night would skyrocket "Tank" Davis' career to astronomical heights and position him as boxing's next big cash cow.

Gervonta Davis sinks into a sofa, his arm bent at the elbow, hand supporting his head in a brief moment of relaxation.

“So, tell me …,” a distinctly wispy voice on the other end of a recent Instagram Live session prompts. “How do you feel about you being you?”

Davis doesn’t ponder the inquiry much.

“I feel great,” he fires back. “I’m just taking it a day at a time, staying strong, staying focused.”

The questioner nods his head in approval toward the latter portion of the response. And for Davis, that assent is appreciated because it’s coming from a man who he has deep reverence for — none other than boxing legend, Mike Tyson.

If Davis is going to truly become the new “Baddest Man on the Planet” and take the baton as boxing’s next big cash cow from the man whose Mayweather Promotions he fights under, Floyd Mayweather Jr., the time to launch himself into superstardom is now.

The 25-year-old Davis makes his pay-per-view debut Saturday night on Showtime, as he’ll face Leo Santa Cruz at the Alamodome in San Antonio, Texas. Davis’ WBA “Regular” lightweight title and Cruz’s WBA "Super" junior lightweight championship will be on the line. But there’s much more at stake than the gold hardware, and Davis knows it.

Davis views defeating Santa Cruz, a four-division world champion, as a proving point that he must make to himself, as it’s the only obstacle keeping him from pressing liftoff and ascending to astronomical heights. Behind his thunderous power, "Tank" is already perceived as great. How great? Well, that's where this proving point comes into play.

“Michael Jordan used to read the paper and do what they said he couldn’t do,” Davis said during Thursday’s press conference. “That’s what I’m doing. I have to prove that I’m the baddest man in the sport on Saturday night.”

Just as Tyson approved of Davis’ focus a month ago, Mayweather has tried to keep “Tank” seeing nothing but tunnel vision this week, heading into the biggest fight of his career.

To start punching "being the next pay-per-view star” into fruition, Davis must win Saturday night. Building up to the fight, Davis hasn’t minced words, referring to Santa Cruz as his best opponent to date — something that the Mexican champ has reciprocated about “Tank.”

Davis spent 15 weeks training for Santa Cruz in a camp he called “perfect.” On Friday, he successfully made weight, as he tipped the scale at 129.8 pounds — just below the 130-pound limit. In the past, Davis has struggled making weight. That's not the only transgression that Davis has had to deal with. In February, Davis turned himself into police and was arrested on simple battery and domestic violence after a video emerged on social media showing him violently snatching his ex-girlfriend out of her seat and dragging her off the court at a charity basketball game in Miami.

During an appearance on the Last Stand Podcast with Brian Custer podcast last month, Davis admitted he was "wrong" for the incident.

Leonard Ellerbe, the CEO of Mayweather Promotions, has noticed a newfound maturity from Davis and believes it stems from being a dad to his toddler daughter, Gervanni Davis.

“I have definitely noticed the growth, the maturation of him as a young man in just the last year alone,” Ellerbe told DAZN News. “He fights for his daughter. His entire mindset has completely changed. He has made the necessary changes in his life to become a better father and become a great fighter.”

Despite claiming 22 of his 23 wins by knockout, the undefeated Davis said Thursday that he doesn’t need a KO to prove he’s boxing’s next big superstar. However, there’s no doubting how pivotal of a bout this is for his career.

The 5-6 “Tank” looms and hits with ferociously detonating punching power, which has given him a ridiculous 95.6 percent knockout ratio. How that power combats the volume punching of Santa Cruz (37-1-1, 19 KOs) remains to be seen. That being said, a victory for Davis and his popularity will only balloon. Already, Davis’ star power is undeniable, with rap stars Lil Baby and Casanova walking him out to his last fight in December, and with his 2.2 million Instagram followers. (Among current boxing world champions, only Canelo Alvarez, Anthony Joshua, Manny Pacquiao, Tyson Fury and Gennadiy Golovkin have more IG followers).

“There’s something that is intangible, almost indescribable,” Stephen Espinoza, Showtime’s president of sports and event programming, told DAZN News about Davis’s magnetic appeal with fans. “He’s got a great backstory. Once you hear about the challenges that he’s overcome and the way he’s overcome them, you can’t help but root for him.”

Davis' father was in prison and mother addicted to drugs when he was pulled from her custody by child protective services at the age of 5, along with his two older brothers. That sparked living under several roofs for Davis, who started fighting on the Baltimore streets at an early age.

Even as he discovered boxing as a solace, distress would follow, as death filled the air of his Baltimore streets and claimed the lives of three older boxers that he formed a bond with, including Qaadir Ford, the son of Davis’ trainer, Calvin Ford. Qaadir was shot and killed in 2013.

From that, Davis was able to channel his rage into becoming a three-time world champion under the guidance of Mayweather and on a trajectory that keeps escalating. Espinoza can’t quite pinpoint and unearth Davis’ “it” factor, although he tried to connect the dots.

“He’s a babyface and women are attracted to him, and he turns into something ferocious on fight night and delivers performances that seem impossible for someone as unassuming as he is out of the ring,” Espinoza offered. “But there is something which you can’t quite put your finger on that makes you like this kid. Perhaps it’s the humility, innocence … there’s something that bonds him to his fans, to his audience in a way that many fighters could only wish for. It’s unmistakable.”

So is the growing entertainment value that Davis delivers with each fight. He entered the ring to an elaborately choreographed Michael Jackson “Thriller” tribute, before destroying Hugo Ruiz with a first-round KO at the Dignity Health Sports Park in Carson, Calif. in Feb. 2019. In a Baltimore homecoming fit for a king five months later, he produced more fireworks via a second-round TKO of Ricardo Nunez. Last December, Davis energized an Atlanta market that hadn’t had that level of boxing since Evander Holyfield and "Tank" absolutely lit up the city. Although a veteran Yuriorkis Gamboa stubbornly hung around in the fight, Davis ended that bout, too, in scintillating fashion with a 12th-round TKO, which was punctuated with a hellish short uppercut.

What Davis does on Halloween night will move the needle on blasting off toward becoming boxing’s next big pay-per-view superstar or have him trying to rebound from that ambition being stalled via what would mark his first pro loss.

It’s now up to “Tank” to prove the former to himself by beating Santa Cruz. Then, he could brace boxing for liftoff.