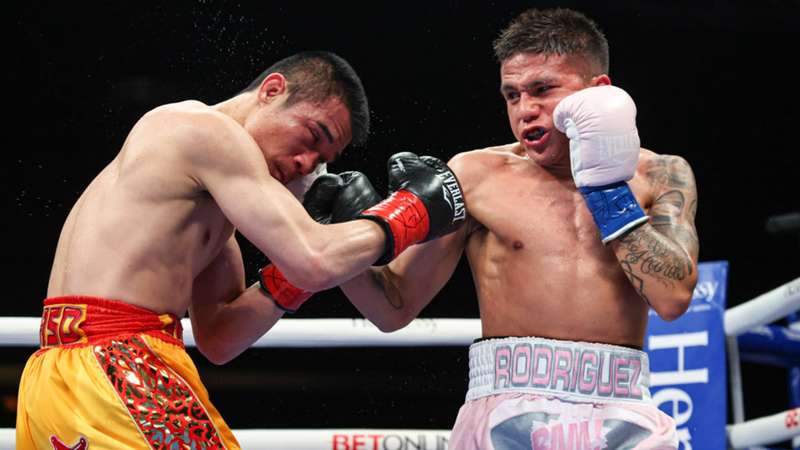 Boxing's youngest current world champion returned on Saturday as Jesse Rodriguez put his WBC super flyweight belt on the line against former two-time WBC titlist Srisaket Sor Rungvisai. Even though Rodriguez was a heavy favorite, the question was how would he handle the power from the most dangerous puncher of the 115-pound division?

Rodriguez never had to find out as he used his superb speed and precision to drop Sor Rungvisai twice and stop him at the 1:50 mark of the eighth round to retain the WBC super flyweight title from Tech Port Arena in San Antonio, Texas. DAZN had the fight scored 70-62 at the time of the stoppage.

In the early going, Rodriguez would get in, connect, and by the time Sor Rungvisai would unload, the 22-year-old would already be out of there. The game plan was for Rodriguez to continue to use his quickness and pinpoint accuracy to negate Sor Rungvisai's power.

Rodriguez (16-0, 11 KOs) changed his attack in the fourth round when a right hand almost sent Sor Rungvisai's gloves to the canvas. Instead, "Bam" was more willing to stand in the pocket and trade with Sor Rungvisai as he realized the native of Thailand's power wasn't what he thought it was coming into the fight.

“After the third round, I felt like his power wasn’t the same," Rodriguez said in his post-fight interview with DAZN's Chris Mannix.

"He was still strong, but not like the first two rounds.

“Coming into the fight, I said I couldn’t stand in there like I did with Cuadras, and we came out tonight and put on a show.”

Instead of Sor Rungvisai's power being the deciding factor, it was "Bam" who showed there is a new guard in the land of the super flyweights. During the seventh round, a left hook to the temple sent Sor Rungvisai to the canvas. The 35-year-old tried to convince the referee it was a slip, but the official wasn't buying the excuse.

Rodriguez made sure that Sor Rungvisai wouldn't make it to round nine. He closed the show with an overhand left followed by a barrage of power shots. He kept going until the referee waved it off to successfully defend his title for the first time.

Sor Rungvisai (50-6-1, 43 KOs) was stopped for the first time since June 2009 in his second professional fight. On what's next for Rodriguez, it would appear to be either Roman "Chocolatito" Gonzalez or WBA (super) Juan Francisco Estrada. However, Estrada is in line to face mandatory challenger and Rodriguez's brother Joshua Franco. Rodriguez says there's no chance of that happening, so a trip down to 112 pounds is more likely for the time being.

“I’m down to do whatever Robert (Garcia, his head trainer) says," Rodriguez said.

"Any champion at 112, I’m here. I’m a special fighter, not an average fighter.

“I grew up watching these guys, so being in the ring with them is a privilege in itself. And beating them the way we’ve been beating them, it means everything.”

Here is what happened at Jesse Rodriguez vs. Srisaket Sor Rungvisai.

facebook twitter whatsapp
Kicking off the Rodriguez vs. Sor Rungvisai undercard is Raymond Ford (11-0-1, 6 KOs) taking on Richard Medina Jr. (13-0, 7 KOs) in featherweight action. An excellent ovation for Medina, who is from San Antonio. Ford got a gift in his last time out in February with a split-decision nod over Edward Vazquez. Someone's "0" is about to go.

Two more title fights are on the bill, so stay locked in what should be a thrilling card.