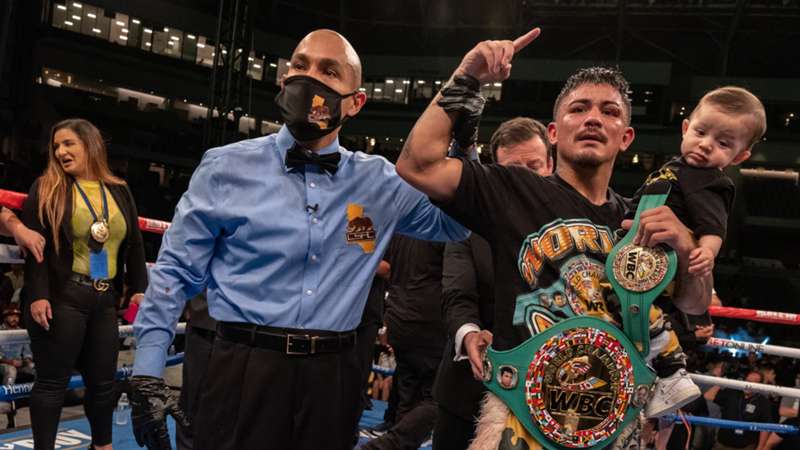 Has round one already gone to JoJo Diaz?

Typically, press conferences are more for media to secure content and a way to sell the upcoming fight. Rarely do you see anything of value between the combatants.

That was expected to be in the case on the first Friday of November in a ballroom at the Venetian hotel in Las Vegas, the day before Canelo Alvarez stopped Caleb Plant to become the undisputed super middleweight champion. Devin Haney and JoJo Diaz were on the stage to promote their WBC lightweight title clash this Saturday on DAZN (check your country to see if it's available). Haney and Diaz are mild-mannered boxers who do their talking with their fists.

On this day, however, we saw a more animated Haney. The recently turned 23-year-old would cut Diaz off with comments and spewed trash talk during the staredown. Some took it as Haney finally speaking up and getting his name out while. Others felt it was because Haney has a chip on his shoulder for not securing fights with Ryan Garcia, Gervonta Davis, Vasiliy Lomachenko, and former three-belt champion Teofimo Lopez. From his observation of being inches away from Haney, Diaz thinks it's the latter.

"Absolutely (Haney has a chip on his shoulder)," Diaz admitted to DAZN News. "I feel like that is Devin Haney’s persona. I just think that he's at a point in his life and in his career where he's young, he's hungry, and he's very confident, very arrogant right now. I've been in that point too in my career and my life. But now that I'm a little older, I'm 29, and I experienced what I've had, what I have experienced, inside and outside the ring, I'm able to keep my composure a little more and able to understand the situation than what's going on around me now.

"So I just embraced everything and observe everything, but now it's just about focusing on the job at hand and the tasks I needed to get done. And that is being both mentally and physically ready for this fight. That's what I have been doing this entire camp. I've been getting myself mentally prepared for this moment because this is a moment that I've been waiting for my whole life. I'm just embracing it, grasping the moment, and making sure that I'm taking care of myself."

While the battle inside the MGM Grand Garden Arena with the WBC strap has yet to occur, Diaz (32-1-1, 15 KOs) feels Haney's actions give him the mental advantage before the first bell sounds.

"I just let him talk. He could talk all the s— that he wants. It's just all publicity at the end of the day. I let none of that s— get to me anymore because I know that he's not gonna touch me or anything like that. So it's not gonna be any retaliation like that anyways, so there's no point in me expressing my emotions."